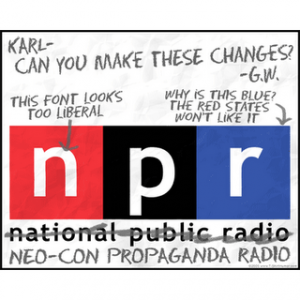 From: "Paid Lying: What Passes for Major Media Journalism"

Founded in 1970 as an independent, private, non-profit member organization of US public radio stations, NPR promised to be an alternative to commercial broadcasters by "promot(ing) personal growth rather than corporate gain (and) speak with many voices, many dialects."

Having long ago abandoned its promise, and given its substantial corporate and government funding, NPR is indistinguishable from the rest of the corporate media, just as corrupted, and consider its former head, Kevin Klose.

He was president from December 1998 - September 2008 and CEO from 1998 - January 2009. Earlier he was US propaganda director as head of the Voice of America (VOA), Radio Liberty, Radio Free Europe, Radio Free Asia, Worldnet Television, and the anti-Castro Radio/TV Marti, so he fit easily into his new role.

On January 5, 2009, Vivian Schiller succeeded him as president and CEO. Her official bio says she was previously with "The New York Times Company where she served as Senior Vice President and General Manager of NYTimes.com."

She'll oversee "all NPR operations and initiatives, including the organization's critical partnerships with our 800+ member stations, and their service to the more than 26 million people who listen to NPR programming every week." Most don't know they're getting the same corporate propaganda and "junk food news" or that

NPR calls itself "public" to conceal its real agenda, and why critics call it "National Pentagon or Petroleum Radio" with good reason.

Created by the Public Broadcasting Act of 1967, the Corporation for Public Broadcasting (CPB) calls itself "a private, nonprofit corporation created by Congress...and is the steward of the federal government's investment in public broadcasting. It helps support the operations of more than 1,100 locally-owned and-operated public television and radio stations nationwide, and is the largest single source of funding for research, technology, and program development for public radio, television and related online services."

Like NPR, it's heavily corporate and government funded and provides similar services for them. Under George Bush, former Voice of America director Kenneth Tomlinson was chairman of CPB's Board of Governors until an internal 2005 investigation forced him out for repeatedly braking the law.

On September 16, 2009, a CPB press release announced that "The board of directors (of the CPB) today elected Dr. Ernest Wilson III (as) chairman and re-elected....CEO Beth Courtney (as) vice-chair."

Wilson previously held senior policy positions as Director of International Programs and Resources on the National Security Council. He was also Policy and Planning Unit Director for the US Information Agency and a member of the Council on Foreign Relations (CFR).

Beth Courtney is a George Bush appointee, a past chairman of the board of America's Public Television Stations and present CPB vice chairman. Currently she also serves on the boards of Satellite Educational Resources Consortium, the Organization of State Broadcasting Executives, the National Forum for Public Television Executives, and the National Educational Telecommunications Association along with other appropriate credentials for her re-appointment.

"All of us believe our goal is to serve the entire democracy, the entire country."

Not according to FAIR on "every on-air source quoted in June 2003 on four of (NPR's) news shows: All Things Considered, Morning Edition, Weekend Edition Saturday and Weekend Edition Sunday." Each guest was classified "by occupation, gender, nationality, and partisan affiliation." Combined, 2,334 sources from 804 stories were quoted.

FAIR found that NPR relies on the same dominant sources as the major media that include government officials, professional experts, and corporate representatives nearly two-thirds of the time.

Male guests outnumbered women about 4:1, and those quoted most often came from the same elite categories as men.

Overall, NPR represents the same dominant interests as the major commercial media - conservative, pro-business, pro-war, pro-Israel, and very much against the public interest while pretending to support it.

FAIR analyzed PBS's flagship NewsHour guest list and drew similar conclusions. Like NPR, it's ideologically right and usually censors progressive content and public interest programming. In a 1990 NewsHour evaluation, FAIR compared its content to ABC's Nightline and found that it presented "an even narrower segment of the political spectrum." It then conducted an October 2005 - March 2006 analysis of all of its programs, got similar results, and determined that NewHour is even more ideologically right than NPR that tilts far in that direction itself.

An October 6 NPR story is typical of most others. It charged Hugo Chavez with "Targeting Opponents For Arrest." Reporter Juan Forero claimed "dozens of university students" went on hunger strike outside OAS headquarters in Caracas on September 28 along with others "across the country....in support of Julio Cesar Rivas, a student who was arrested during an anti-government demonstration in August...."

Rivas is the coordinator and founder of Juventud Activa de Venezuela Unida (United Active Youth of Venezuela - JAVU). Earlier, he was part of a staged, violent street protest against Venezuela's new Education Law. The government says JAVU acts as "shock troops" in opposition protests and is liberally funded by the National Endowment of Democracy (NED), International Republican Institute (IRI), and US Agency or International Development (USAID) to disrupt internal Venezuelan affairs. It's a familiar scheme, repeated numerous times in the past, to discredit and disrupt the Chavez government in hopes of eventually ousting it.

JAVU has about 80,000 members in most Venezuelan states, and its blog site calls for bringing down the government and supporting the Honduran military coup.

While in custody, Venezuela Public Defender Gabriela Ramirez assured him in person that his full constitutional rights will be protected. Street protests still continue and have been countered by pro-Chavez ones calling for "peace and tolerance." According to the Federation of Bolivarian students' Carlos Sierra:

Opposition "students are being used and manipulated by the top leadership of the irrational opposition, which, via the (dominant) media, send them to generate violence and terrorism in the country" much like on previous occasions.

But according to NPR's Forero, Rivas was "sent to one of Venezuela's most infamous prisons" where other government opponents are held as political prisoners. Chavez "has been jailing dozens of key opponents - some of them students, some of them veteran politicians" in citing unnamed "human rights groups and constitutional experts (claiming) Venezuela is increasingly singling out and imprisoning its foes in politically motivated witch hunts."

Forero didn't mention that Rivas fomented violence. Others arrested also broke the law. No one is a political prisoner, and all Venezuelans get fair and equitable trials, unlike in America where real political arrests, prosecutions and convictions happen regularly against innocent targeted victims - a topic NPR and PBS won't touch except to vilify them publicly on-air.

Nor do they report truthfully on Occupied Palestine. On October 12, 2009, on NPR's Morning Edition, reporter Renee Montagne practically extolled Israeli racism in stating:

"There is a new enemy for some Israelis: romance between Jewish women and Arab men, (so) vigilantes have banded together to fight it." She means from "Jewish settlements" that "have sprung up (in) traditionally Arab" East Jerusalem, but won't admit they're on stolen Palestinian land.

NPR's Sheera Frankel joined a patrol, implied Arabs are inferior to Jews, and suggested they pose a danger to Jewish women and girls. She described vigilantes on the lookout for "Arab-Jewish couples (to) break up their dates," suggesting it's the right thing to do, but never questioning the legitimacy of settlements, vigilante violence in East Jerusalem, its lawless disregard for the law, or great harm to innocent people. Instead she called "mixed couples a growing epidemic" of miscegenation - typical of NPR's racism and one-sided support for Israel.