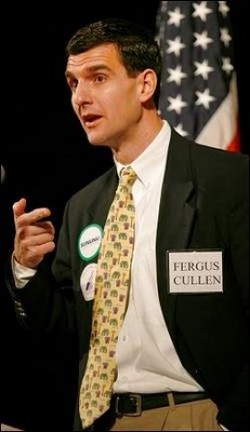 May 14, 2008
CONCORD — The chairman of the New Hampshire Democratic Party sought Republican support to oust GOP Chairman Fergus Cullen after he called for the "assassination" of Bill and Hillary Clinton.

At issue is Cullen's decision to include a piece of "family-appropriate" political humor in the state Republican Party's May 8 newsletter.

There was a seven-line joke bemoaning "how far America's military had deteriorated under the Clinton administration" since "every last one" of the shots fired by 21 Marines missed the former president and first lady as they boarded Air Force One for the last time.

Cullen, who once ran for state Senate from the district representing Rochester, limited his comments to a statement.

"There is a place for humor in politics, but I can understand why some might find this joke in poor taste. No offense was intended, and I regret if any was taken," he said. "I personally apologize to President and Sen. Clinton."

Buckley, whose team alerted the media to the letter Monday, told the senators "there is nothing humorous about assassinating a president, regardless of political affiliation ... ."

Buckley — noting it's the 40th anniversary of the assassination of Dr. Martin Luther King Jr. and Robert Kennedy — later told Foster's: "It is not appropriate for a state party chair of any party to call for an assassination of a president or first lady."

Buckley said he had not heard back from the senators, and messages left for the Granite State's senators and McCain's senate and presidential staff went unreturned.