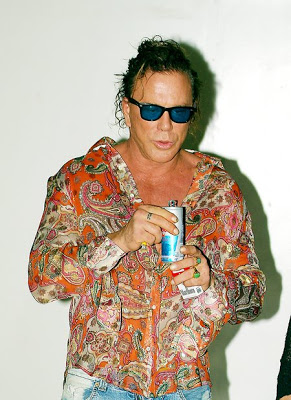 "Rourke was born in Schenectady, New York to a family of Irish and French descent. His father, Philip Andre Rourke, Sr., an amateur body builder, left the family when Mickey was six years old. After his parents divorced, his mother, Ann, married a police officer with five sons and moved Rourke, his younger brother and their sister to southern Florida, where he attended Miami Beach Senior High School. ... "

Mickey Rourke has expressed sympathy with President George W Bush's predicament in the wake of the September 11 terrorist attacks, saying he does not know "how anyone could have handled" the situation.

The Hollywood actor, who is enjoying a career resurgence with his new film, The Wrestler, for which he won a Golden Globe on Sunday, also said it was "too easy" to blame Mr Bush for a host of global issues including terrorism and Islamic fundamentalism.

Unlike many of his Hollywood peers, who are vocal supporters of President Elect Barack Obama, Rourke said he had not followed last year's historic election battle between Mr Obama and John McCain.

Instead he spoke up for Mr Bush, who with just days of his presidency left, has the lowest approval rating since Richard Nixon resigned in 1974.Rourke urged people to consider the pressures Mr Bush was under after the 2001 terror attacks and in the early days of the War on Terror. 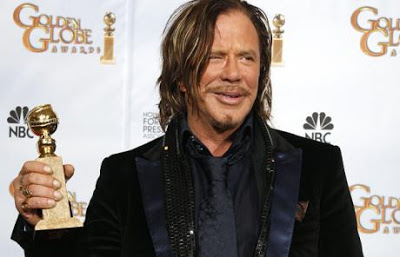 "President Bush was in the wrong place at the wrong time, I don't know how anyone could have handled this situation," the actor said in an interview with GQ magazine.

"I don't give a ---- who's in office, Bush or whoever, there is no simple solution to this problem... I'm not one of those who blames Bush for everything. This ---- between Christians and Muslims goes back to the Crusades, doesn't it." He added: "It's too easy to blame everything on one guy. These are unpredictable, dangerous times, and I don't think that anyone really knows quite what to do."

The actor also told the magazine he was surprised at Britain's approach to fundamentalists and the freedom of speech in the UK.

"I was in London recently and I couldn't believe all these hate-talking fanatics you have over here who are allowed to carry on doing their thing even when a bus full of women and children gets blown to pieces."

http://www.telegraph.co.uk/news/newstopics/celebritynews/4237005/Mickey-Rourke-defends-George-W-Bush-over-911.html•••Mickey Rourke thinks he is the only actor who should be allowed to talk politics

“Actors should shut up about politics, because they tend to be ill-informed finger-pointers who just cozy up to some flavor-of-the-month liberal, you know?”

Somehow the opinion of a wife beating drunk doesn't mean all that much. 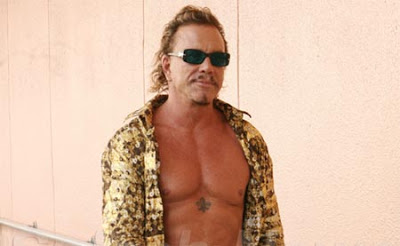 On Religion, Rage "Explosions" and Suicide

Rourke recently said “My grandmother always said: ‘God has a plan for all of us.’ I should have went along with his, not mine, my plan sucked.” I’ve heard it put more eloquently, but probably never so honestly. In fact, it’s Rourke’s commitment to his Catholic faith that keeps him from falling back into his reckless ways. Rourke said a few years back:

”I’ve talked to my priest a lot. I used to have to call him or the shrink when there was an explosion, because I was really good at not talking to anybody until there was an explosion. My priest is this cool Italian from New York. We go down to his basement and he opens the wine. We smoke a cigarette and I have my confession. He sends me upstairs to do my Hail Mary’s. I mean, I’m no Holy Joe, but I have a strong belief…If I wasn’t Catholic I would have blown my brains out."

In fact, Mickey Rourke attempted suicide, but was saved by the intervention of his priest, Fr. Pete. ...

Rourke: "If I wasn't Catholic I would have blown my brains out." 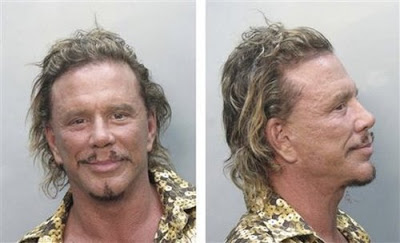 Arrests for Spousal Abuse and Driving Under the Influence

"Wild Orchid co-star Carré Otis was briefly a cause célèbre following the release of Wild Orchid due to rumors she and then-lover Rourke filmed an unsimulated sex scene. She married Rourke on June 26, 1992. In 1994 Rourke was arrested for spousal abuse. The charges were dropped after the couple reconciled. They gave their relationship another chance and also starred together in Exit in Red but their marriage ended in December 1998. In November 2007, Rourke was arrested again, this time on DUI charges in Miami Beach."

"Rourke's political views came under fire when he claimed to have donated part of his salary from the 1989 film Francesco to the Provisional Irish Republican Army. He later retracted the statement, although he has an IRA symbol tattoo." 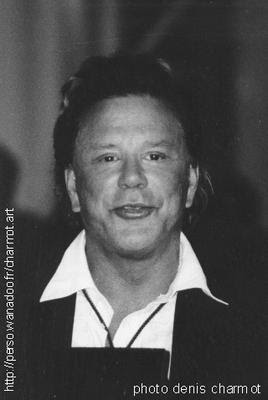 Orders from the Mafia

The film was to have chronicled the adventures of the Westies, ruthless Irish-American mobsters famed for chopping up the bodies of their rivals in Manhattan's West Side in the mid-Seventies.

But a Mafia trial in New York this week heard the movie was killed off in the 1980s on the orders of Mafia Don John Gotti. Michael 'Mikey Scars' DiLeonardo told the hearing Gotti was terrified the movie would "reflect badly" on his crime empire.

DiLeonardo, giving evidence at the trial of Gotti's older brother Peter, 65, on conspiracy charges, claimed Mickey Rourke was taken to a restaurant on the Upper East side and made an offer he could not refuse.

"I'm not sure what would have happened had he refused." 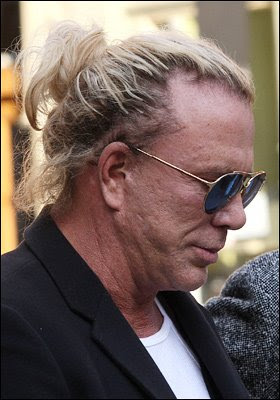 "Mickey Rourke once had an unusual way of dealing with his anger - he cut off his finger. The actor was taken to the hospital and had to endure an eight-hour surgery to save his finger. ...

The eccentric star says, "I cut my little finger off because I thought I didn't want it. I was angry about something so I decided I didn't need the end of the little finger on my left hand. I didn't cut it off completely - it was still hanging on a tendon - and an English friend, Gary, carefully carried the end of it as we went to hospital to try to rectify the situation. It took the surgeon eight hours to sew it back on. I still can't bend it properly." 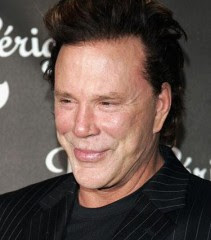 Remember how upset we were yesterday that Mickey Rourke told a paparazzo to "Tell that fagot who wrote all that shit in the paper I'd like to break his fucking legs"? Well, all's forgiven now that he's issued the standard publicist written apology:

"I want to sincerely apologize for the derogatory word I used. It was insensitive and inappropriate of me and I am deeply sorry that I may have offended anyone."

According to E!'s Marc Malkin, who got the "exclusive statement" (Digression: Is it crazy to think that a public apology ought to be something made, you know, publicly?), this isn't the first time Rourke's been in trouble for using the word "fag":

"Rourke found himself in similar trouble back in 2006 when he used the F-word to describe a drunken fan who he almost got into a fight with."Look, I'm not afraid to say the word f-g," he said in an interview with New York's Time Out magazine. "I've got plenty of gay friends. We toss the word around."