" ... Bandera’s lieutenants ... promised to work closely with Hitler, then helped to launch a pogrom that killed four thousand Lvov Jews in a few days, using weapons ranging from guns to metal poles. . ... After the war Bandera lived in Munich. British intelligence used him to help run agents into Ukraine to gather intelligence and to help the Ukrainian underground against the Soviets. The CIA used some of Bandera’s former cronies for similar reasons ... "

Norman J.W. Goda is Braman Professor of Holocaust Studies at the University of Florida. His most recent book is Tales from Spandau: Nazi Criminals and the Cold War (2007), and is co-author of US Intelligence and the Nazis (2005).

On January 22, 2010 Ukrainian President Viktor Yushchenko honored Stepan Bandera by posthumously bestowing on him the state honor, “Hero of Ukraine.” The Soviet KGB assassinated Bandera, a Ukrainian nationalist-in-exile, in 1959. Many Ukrainians, including Ukrainian émigré groups in Canada, pressed Yushchenko to grant the honor, which, according to one statement, "would restore justice and truth about the Bandera and the...struggle for liberation that he headed." To this day, many Ukrainians view Bandera as a martyred freedom fighter.

As an uncompromising leader of the militant, terrorist branch of the Organization of Ukrainian Nationalists (OUN), Bandera became a Nazi collaborator who lived with his deputies under German protection after World War II began. In preparation for the attack on the USSR, the Nazis recruited Bandera’s followers to act as Ukrainian-speaking policemen and to serve in two Ukrainian volunteer army battalions. By working with the Nazis, Bandera hoped to free Ukraine from Soviet rule and establish his own government there. An independent Ukraine, Bandera promised, would remain friendly to Germany.

Historian Karel Berkhoff, among others, has shown that Bandera, his deputies, and the Nazis shared a key obsession, namely the notion that the Jews in Ukraine were behind Communism and Stalinist imperialism and must be destroyed. “The Jews of the Soviet Union,” read a Banderist statement, “are the most loyal supporters of the Bolshevik Regime and the vanguard of Muscovite imperialism in the Ukraine.” When the Germans invaded the USSR in June 1941 and captured the East Galician capital of Lvov, Bandera’s lieutenants issued a declaration of independence in his name. They further promised to work closely with Hitler, then helped to launch a pogrom that killed four thousand Lvov Jews in a few days, using weapons ranging from guns to metal poles. “We will lay your heads at Hitler’s feet,” a Banderist pamphlet proclaimed to Ukrainian Jews.

The Germans intended to keep Ukraine for themselves. They arrested Bandera for his intransigence on the issue of independence, but released him in 1944 when it appeared that his popularity with Ukrainians might help stem the Soviet advance. But whatever their disappointment with the Germans, the Banderists never disagreed with their Jewish policy in Ukraine, which eventually killed over 1 million Ukrainian Jews. 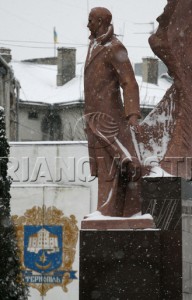 This is a truth that many in Ukraine, particularly in its western parts, deny. In his book Erased (2007), Omer Bartov discusses the large bronze statue of Bandera that stands in a park in the east Galician town of Drohobych, most of whose 15,000 Jews were murdered. The park stands on the site of the town’s former Jewish ghetto, but there is not so much as a plaque in the park to memorialize the Jewish dead. This and other examples like it make a condemnation of Yushchenko’s step necessary.

But the rest of the story, much of which is revealed in CIA records released in 2007, reveals irony in Yushchenko’s award. After the war Bandera lived in Munich. British intelligence used him to help run agents into Ukraine to gather intelligence and to help the Ukrainian underground against the Soviets. The CIA used some of Bandera’s former cronies for similar reasons, but never used Bandera himself, owing to Bandera’s infatuation with his own legend. “Bandera,” said one CIA report from 1948, “is by nature a political intransigent of great personal ambition [who] has…opposed all political organizations in the emigration which favor a representative form of government in the Ukraine, as opposed to a mono-party, OUN/Bandera regime.”

Ukrainian sources confirmed that “fighting people in the homeland … [were] not prepared to accept [Bandera] as a dictator,” and that Bandera’s program “was unacceptable to the resistance movement inside [Ukraine].” In 1952 Bandera temporarily resigned as head of the OUN, pressured “by the growing opposition to his leadership among … top-ranking nationalist leaders who opposed him on the grounds of his totalitarian tactics….” Bandera’s subsequent petulance and his insistence on directing all facets of the Ukrainian underground at home and abroad led the British to drop him in 1953. With no high level contacts to listen to him, Bandera was now on the outside looking in.

Owing to his self-promotion in print and on West German radio, Bandera remained popular with thousands of Ukrainian émigrés in West Germany. His superficial effectiveness prompted West German intelligence (the BND) to establish contact in 1956. By 1959 the BND was helping Bandera to run a new generation of Ukrainian agents from West Germany into the USSR. General Reinhard Gehlen, the head of the BND, had lead German Army intelligence in the USSR during the war. He and his subordinates were surely familiar with Bandera’s wartime record. They were less familiar with the fact that the BND was by now thoroughly penetrated with Soviet agents. On October 14, 1959, Bandera had lunch with senior BND officials to discuss the expansion of operations in Ukraine. The next day the KGB assassinated Bandera in his apartment building.

Because Bandera effectively promoted his own legend, and because the Soviets were behind his death, émigrés who did not know any better labeled him as the martyred leader of Ukrainians abroad. Fifteen hundred attended his funeral in Munich. US officials, on the other hand, noted that Bandera’s “strong arm tactics” and “competition with other émigré groups” meant that “many émigré figures clearly do not personally lament his passing.” His death meant nothing for CIA operations against Soviet rule in Ukraine, which depended on the very same émigré leaders who, though followers of Bandera during the war, had dumped their former chief as a self-promoting caricature. They continued their work under CIA tutelage until the USSR collapsed. Such is another story.

It is a sad comment on Ukrainian memory that the man declared a Hero of Ukraine in January headed a movement that was deeply involved in the Holocaust. It is more gratifying to know that by the time of Stepan Bandera’s death, most Ukrainian leaders had long rejected him as a dangerous charlatan who harmed his own cause. By the time of his death, Bandera was reduced to dancing with the Cold War’s most compromised intelligence agency, where the Soviets could watch his every move. Those who label him a hero today, in other words, are as foolish as they are offensive.