LONDON OBSERVER: Alex Constantine's THE COVERT WAR AGAINST ROCK – One of "The 50 Greatest Music Books Ever" - The Constantine Report
0 SHARES

Assassinations » LONDON OBSERVER: Alex Constantine's THE COVERT WAR AGAINST ROCK – One of "The 50 Greatest Music Books Ever"

LONDON OBSERVER: Alex Constantine's THE COVERT WAR AGAINST ROCK – One of "The 50 Greatest Music Books Ever" 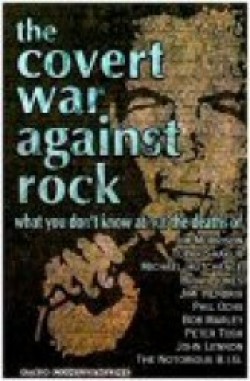 "The 50 greatest music books ever"

All right, my book is only perceived to be the 49th greatest (by "mainstream" media-brainwashed judges) ... but as time passes, and I am shown to be correct, and all of the great ersatz scholars who echo the disinformation, blame lone assassins and drugs for the murders of Lennon, Hendrix, Tosh, etc.– ridiculed the notion of fascist conspiracies – eat their words ... Covert War will move up the scale.

The media is populated by self-important, incompetent snobs. (The Covert War Against Rock has never been reviewed by a "mainstream" newspaper, not even The Observer.)

But even incompetent snobs can appreciate the exposure of realities they deny.

Thanks, Observer censors, for acknowledging reality and giving me my due. Now, if only "journalists" in the US would stop taking dictation and do some actual journalism, we might even make some progress to liberate ourselves from the fascism they have allowed – even blessed – with their lies and distortions. They prosper – gather Pulitzers for deliberate distortions that blind the proles who tout them – while the Alex Constantines starve and scrape to survive in a fascist state.

I am widely perceived at home as a "conspiracy theorist," but there is no truth to this smear. I operate like any other reporter but do not censor and lie, and those who call me a "theorist" have been programmed by a corrupt press, have little exposure to the real world. I am no conspiracy theorist, but there is propaganda value in labelling me as such. It appears that way from a brainwashed perspective.

But time will erode the self-serving lies of the military media and programmable proles.

In the end, I have ALWAYS had the last laugh at the "knowledgable" snobs in the media who looked down at my work. Imagine how I feel about THEIRS. Just as I am not really a conspiracy theorist, they are not really journalists. The judges at the Observer, however, are much closer to the mark than the clowns at NPR, NYT, etc., who have blacklisted me for telling the truth. They won't even mention my name. Just try to find my books on the shelves at Border's ...

Censorship can be so comforting ...

American "reporters" may enjoy the comforts and prestige of willful self-deception, ridicule the truth, but it is my laughter ringing in their ears when all is said and done.

What do you know about Eugene McDaniels’ “Headless Heroes of the Apocalypse” being shut down by Spiro Agnew and Atlantic Records?

Alex Constantine November 10, 2011
| |
Frank Palamara What do you know about Eugene McDaniels' "Headless

Frank Palamara
palamarafrank@yahoo.com
96.234.0.145
What do you know about Eugene McDaniels’ “Headless Heroes of the Apocalypse” being shut down by Spiro Agnew and Atlantic Records?

About this much – from the CD Universe web site:

“When Headless Heroes of the Apocalypse was first released in 1971, so the legend goes, Spiro Agnew himself called Atlantic Records to complain about the album’s incendiary lyrics. Promotional efforts dried up, and since then, the album has become one of the great rare gems of the funk era. … “
See: http://www.cduniverse.com/search/xx/music/pid/6841906/a/Headless+Heroes+Of+The+Apocalypse.htm