She commands a huge "market share" of "thinking Americans" by crabbing constantly about "liberal elites" ... and they only exist in her mind ... The question is: Who vets these donut heads for public display? Ingraham's corporate elite handlers, of course ... 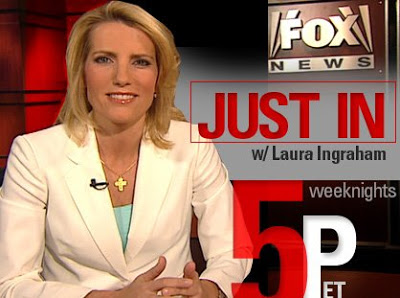 " ... Elites (liberals) are never defined in [Ingraham's] book, but they are called many names. ... Ingraham writes that Elites are defined by a "general outlook". They are cynical, arrogant, un-American, a minority, anti-democracy, hateful of Middle America, self-cultist, liberal, infallible-feeling, godless, Democrat, trial lawyers, god-haters, affirmative action loving, French loving, UN loving, Bill Moyers, PBS, spa-going, Manhattanite, NPR, diverse, left-wing, flag burning, subversive, anti-Israel, traitors, socialist, communist, fascist, aloof, pretentious, turgid, condescending, snobbish, vicious, sex-obsessed, atheist, anti-semitic, genocidal ... liberal Elites perpetuate the false myth of oppressed minorities. ... Their anti-Iraq War stance proves they are anti-American. Ingraham claims to not care what liberal Hollywood says, but then devotes thirty-six pages to a selection of their comments. ... Most telling, the liberal Elite drive around in limousines with black windows, 'live in palaces invisible from the road outside, and fly in private jets, while their managers and assistants tell them only what they want to hear.' Odd, I thought rich people did that, and most rich people are notoriously conservative. ... Ingraham's stereotype of the Limousine Liberal runs into a series of contradictions: how can these limousine elitists also be communist subversives? ... "http://www.counterbias.com/027.html•••An Open Letter to Laura IngrahamPeter N. Kirstein

" ... I am struck by your use of the word 'elites' in such a random manner. Clearly, as you frequently assert, the left is not in power. The left is not a majority; the antiwar movement, while significant and growing, could not deter an immoral war of preemption and invasion in Iraq. Laura, the elites are the Republican-Democratic establishment. The elites are corporate America that profits from blood and imperialism: Halliburton, Bechtel and other corporate giants of American capitalism. The elite includes the media that has become increasingly concentrated and corporatized in the hands of the Murdochs, the Blacks (despite his problems), the GEs and Disneys. The media is basically a Voice of America propaganda machine aimed at Americans that avoids challenging the ethos of the nation in a systematic manner. The Washington Post, for example, was basically a press agent for the Pentagon in the run-up to war. The military is also part of this elite influence that has significantly blurred the lines between civilian rule and military subordination to that rule. ... "

Laura Ingraham is nearly as well known for posing in a leopard print mini-skirt for a 1995 New York Times Magazine cover story on young right-wingers as she is for her seething hatred of “Elites” (aka liberals) and her grueling struggle against the oppressive liberal media. ... Ingraham got her start in journalism at Dartmouth, where she was the first female editor of the ultra-conservative Dartmouth Review. Already tarnished by its reputation for bigoted, homophobic, and sexist reportage, Ingraham took the Review to new levels when she secretly taped meetings of the campus Gay Students Association, sent copies of the tapes to participants’ parents, and, as if that wasn’t enough, published the transcript and went on to publicly denounce the GSA as 'cheerleaders for latent campus sodomites.'"

Ingraham worked briefly as a White House speechwriter for President Reagan before heading to law school at the University of Virginia. After graduation, she quickly rose to a job in uber-con heaven, clerking for Supreme Court Justice Clarence Thomas. As a member of the anti-feminist Independent Women’s Forum, Ingraham had assisted in the “Women for Judge Thomas” campaign that supported her future boss’s appointment to the Supreme Court and promoted attacks on Anita Hill’s testimony.

Apparently in search of a more visible professional field, and capitalizing on the new vogueishness of young rightists, Ingraham went to work simultaneously for both CBS as a commentator on the nightly news and for MSNBC as a regular pundit. ...

Today Ingraham is best known for her nationally syndicated radio show broadcast on 325 stations across the country. Remarkably, she has garnered quite an audience, most likely made up of “true Americans,” who according to Ingraham are “white, southern, Christian, and Republican.” ...

" ... Ingraham began openly campaigning for another cable television show on her radio program. She finally got her wish in 2008, when Fox News Channel gave her a three-week trial run for new show entitled Just In. During the show, there was an off-camera fight with producers (which was caught on tape and posted to the Web by Harry Shearer), and the show ended its short run without being renewed. ... "

" ... According to Talkers' Magazine, The Laura Ingraham Show is tied for fifth among most-listened to talk shows, with an average 5.5 million weekly listeners. ... "