Vladimir Putinpersonally authorised a secret spy agency operation to support a “mentally unstable” Donald Trump in the 2016 US presidential election during aclosed session of Russia’s national security council, according to what are assessed to be leaked Kremlin documents.

The key meeting took place on 22 January 2016, the papers suggest, with the Russian president, his spy chiefs and senior ministers all present.

They agreed a Trump White House would help secure Moscow’s strategic objectives, among them “social turmoil” in the US and a weakening of the American president’s negotiating position.

By this point Trump was thefrontrunner in the Republican party’s nomination race. A report prepared by Putin’s expert department recommended Moscow use “all possible force” to ensure a Trump victory.

Western intelligence agencies are understood to have been aware of the documents for some months and to have carefully examined them. The papers, seen by the Guardian, seem to represent a serious and highly unusual leak from within the Kremlin.

The Guardian has shown the documents to independent experts who say they appear to be genuine. Incidental details come across as accurate. The overall tone and thrust is said to be consistent with Kremlin security thinking. 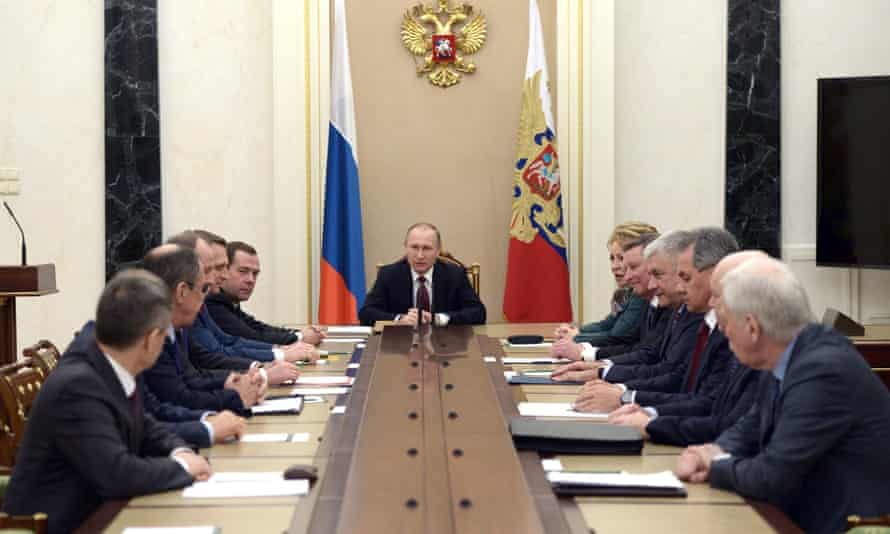 Vladimir Putin holds a meeting with permanent members of the security council on 22 January 2016 at the Kremlin. Photograph: Alexei Nikolsky/Russian presidential press service/TASS

The Kremlin responded dismissively. Putin’s spokesman Dmitri Peskov said the idea that Russian leaders had met and agreed to support Trump in at the meeting in early 2016 was “a great pulp fiction” when contacted by the Guardian on Thursday morning.

The report – “No 32-04 vd” – is classified as secret. It says Trump is the “most promising candidate” from the Kremlin’s point of view. The word in Russian is perspektivny.

There is a brief psychological assessment of Trump, who is described as an “impulsive, mentally unstable and unbalanced individual who suffers from an inferiority complex”.

There is also apparent confirmation that the Kremlin possesses kompromat, or potentially compromising material, on the future president, collected – the document says – from Trump’s earlier “non-official visits to Russian Federation territory”.

The paper refers to “certain events” that happened during Trump’s trips to Moscow. Security council members are invited to find details in appendix five, at paragraph five, the document states. It is unclear what the appendix contains.

“It is acutely necessary to use all possible force to facilitate his [Trump’s] election to the post of US president,” the paper says. 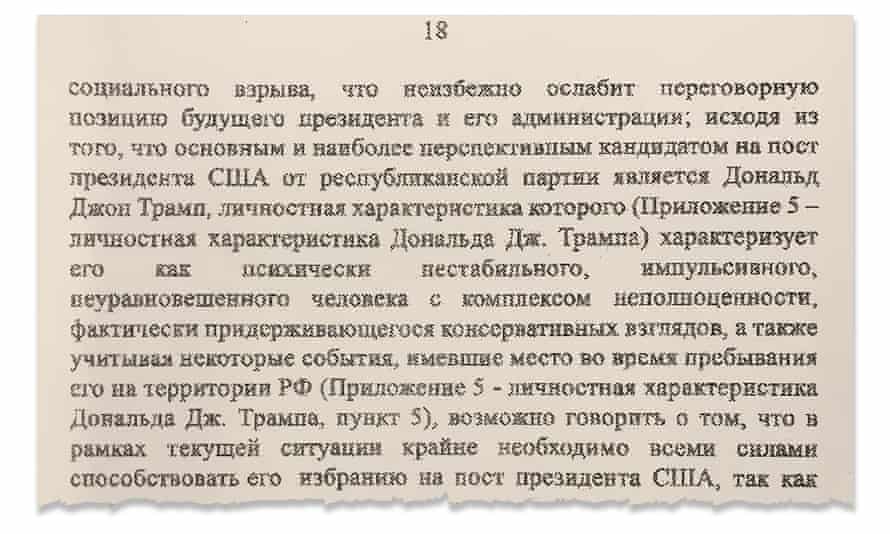 This would help bring about Russia’s favoured “theoretical political scenario”. A Trump win “will definitely lead to the destabilisation of the US’s sociopolitical system” and see hidden discontent burst into the open, it predicts.

There is no doubt that the meeting in January 2016 took place – and that it was convened inside the Kremlin.

Anofficial photoof the occasion shows Putin at the head of the table, seated beneath a Russian Federation flag and a two-headed golden eagle. Russia’s then prime minister, Dmitry Medvedev, attended, together with the veteran foreign minister, Sergei Lavrov.

Also present were Sergei Shoigu, the defence minister in charge of the GRU, Russia’s military intelligence agency; Mikhail Fradkov, the then chief of Russia’s SVR foreign intelligence service; and Alexander Bortnikov, the boss of the FSB spy agency.Nikolai Patrushev, the FSB’s former director, attended too as security council secretary.

According to apress release, the discussion covered the economy and Moldova.

The document seen by the Guardian suggests the security council’s real, covert purpose was to discuss the confidential proposals drawn up by the president’s analytical service in response to US sanctions against Moscow. 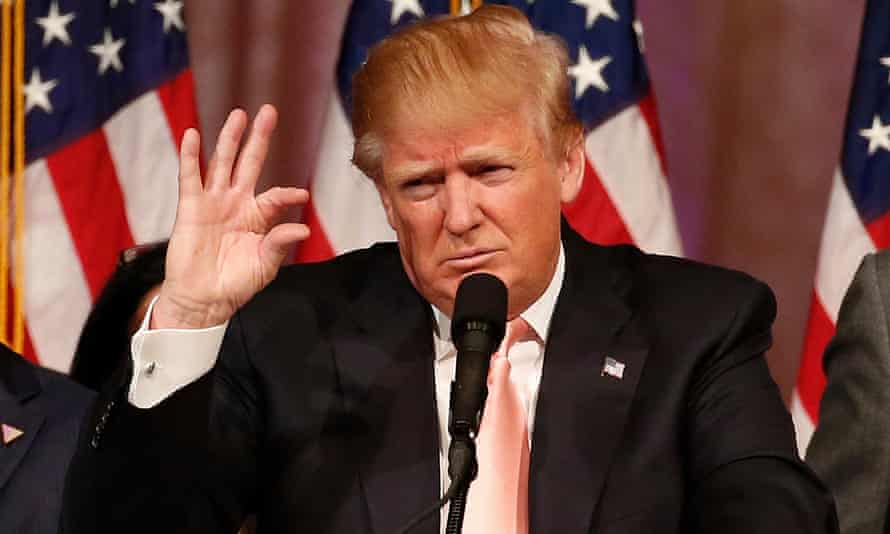 The author appears to be Vladimir Symonenko,the senior official in chargeof the Kremlin’s expert department – which provides Putin with analytical material and reports, some of them based on foreign intelligence.

The papers indicate that on 14 January 2016 Symonenko circulated a three-page executive summary of his team’s conclusions and recommendations.

In a signed order two days later, Putin instructed the then chief of his foreign policy directorate,Alexander Manzhosin, to convene a closed briefing of the national security council.

Its purpose was to further study the document, the order says. Manzhosin was given a deadline of five days to make arrangements.

What was said inside the second-floor Kremlin senate building room is unknown. But the president and his intelligence officials appear to have signed off on a multi-agency plan to interfere in US democracy, framed in terms of justified self-defence.

Various measures are cited that the Kremlin might adopt in response to what it sees as hostile acts from Washington. The paper lays out several American weaknesses. These include a “deepening political gulf between left and right”, the US’s “media-information” space, and an anti-establishment mood under President Barack Obama.

The paper does not nameHillary Clinton, Trump’s 2016 rival. It does suggest employing media resources to undermine leading US political figures.

There are paragraphs on how Russia might insert “media viruses” into American public life, which could become self-sustaining and self-replicating. These would alter mass consciousness, especially in certain groups, it says.

After the meeting, according to a separate leaked document, Putin issued a decree setting up a new and secret interdepartmental commission. Its urgent task was to realise the goals set out in the “special part” of document No 32-04 vd.

Members of the new working body were stated to include Shoigu, Fradkov and Bortnikov. Shoigu was named commission chair. The decree –ukazin Russian – said the group should take practical steps against the US as soon as possible. These were justified on national security grounds and in accordance witha 2010 federal law, 390-FZ, which allows the council to formulate state policy on security matters.

According to the document, each spy agency was given a role. The defence minister was instructed to coordinate the work of subdivisions and services. Shoigu was also responsible for collecting and systematising necessary information and for “preparing measures to act on the information environment of the object” – a command, it seems, to hack sensitive American cyber-targets identified by the SVR. 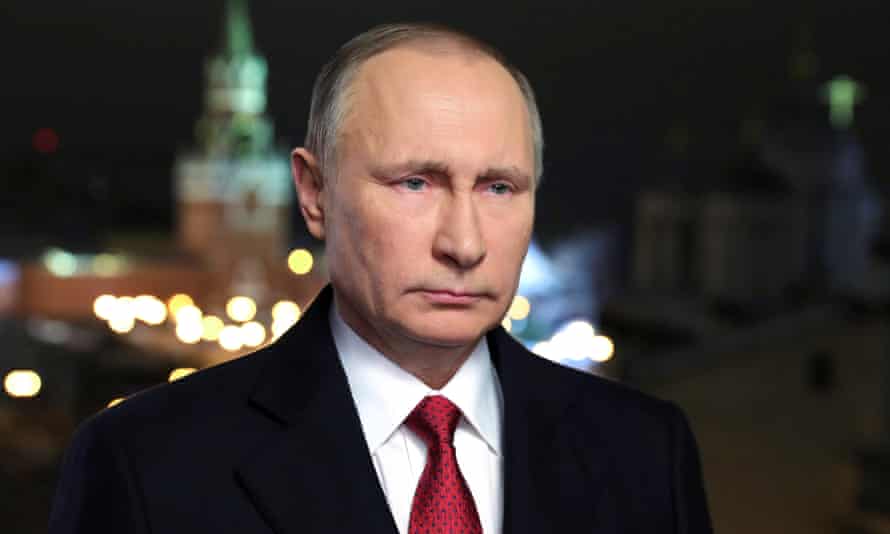 The SVR was told to gather additional information to support the commission’s activities. The FSB was assigned counter-intelligence. Putin approved the apparent document, dated 22 January 2016, which his chancellery stamped.

The measures were effective immediately on Putin’s signature, the decree says. The spy chiefs were given just over a week to come back with concrete ideas, to be submitted by 1 February.

Written in bureaucratic language, the papers appear to offer an unprecedented glimpse into the usually hidden world of Russian government decision-making.

Putin has repeatedly denied accusations of interfering in western democracy. The documents seem to contradict this claim. They suggest the president, his spy officers and senior ministers were all intimately involved in one of the most important and audacious espionage operations of the 21st century: a plot to help put the “mentally unstable” Trump in the White House.

The papers appear to set out a route map for what actually happened in 2016.

A matter of weeks after the security council meeting, GRU hackersraided the serversof the Democratic National Committee (DNC) and subsequently released thousands of private emails in an attempt to hurt Clinton’s election campaign. 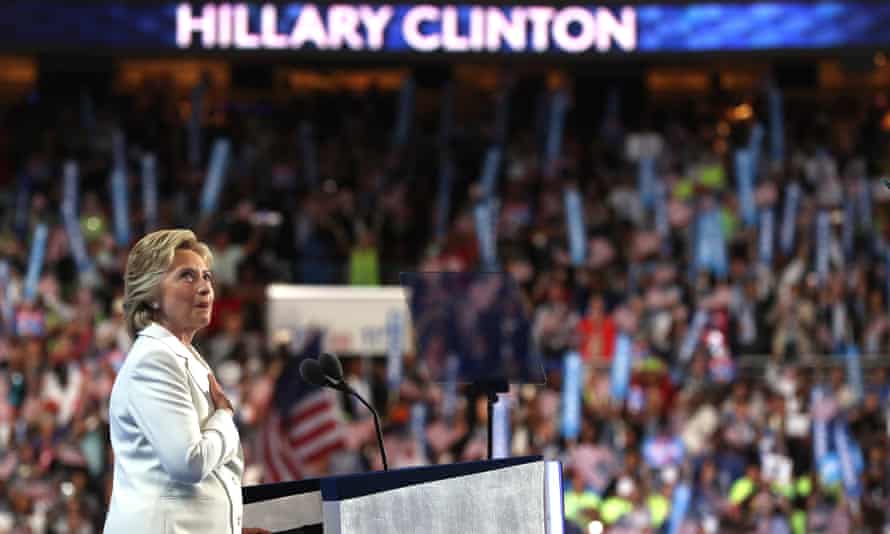 The report seen by the Guardian features details redolent of Russian intelligence work, diplomatic sources say. The thumbnail sketch of Trump’s personality is characteristic of Kremlin spy agency analysis, which places great emphasis on building up a profile of individuals using both real and cod psychology.

Moscow would gain most from a Republican victory, the paper states. This could lead to a “social explosion” that would in turn weaken the US president, it says. There were international benefits from a Trump win, it stresses. Putin would be able in clandestine fashion to dominate any US-Russia bilateral talks, to deconstruct the White House’s negotiating position, and to pursue bold foreign policy initiatives on Russia’s behalf, it says.

Other parts of the multi-page report deal with non-Trump themes. It says sanctions imposed by the US after Russia’s 2014annexation of Crimeahave contributed to domestic tensions. The Kremlin should seek alternative ways of attracting liquidity into the Russian economy, it concludes.

The document recommends the reorientation of trade and hydrocarbon exports towards China. Moscow’s focus should be to influence the US and its satellite countries, it says, so they drop sanctions altogether or soften them.

Andrei Soldatov, anexpert on Russia’s spy agenciesandauthor of The Red Web, said the leaked material “reflects reality”. “It’s consistent with the procedures of the security services and the security council,” he said. “Decisions are always made like that, with advisers providing information to the president and a chain of command.”

He added: “The Kremlin micromanages most of these operations. Putin has made it clear to his spies since at least 2015 that nothing can be done independently from him. There is no room for independent action.” Putin decided to release stolen DNC emails following a security council meeting in April 2016, Soldatov said, citing his own sources.

Sir Andrew Wood, the UK’s former ambassador in Moscow and an associate fellow at theChatham House thinktank, described the documents as “spell-binding”. “They reflect the sort of discussion and recommendations you would expect. There is a complete misunderstanding of the US and China. They are written for a person [Putin] who can’t believe he got anything wrong.”

Wood added: “There is no sense Russia might have made a mistake by invading Ukraine. The report is fully in line with the sort of thing I would expect in 2016, and even more so now. There is a good deal of paranoia. They believe the US is responsible for everything. This view is deeply dug into the soul of Russia’s leaders.”

Trump did not respond to a request for comment.