As we wait with baited breath to see if Vladimir Putin's Q&A today will cover Prince Charles's unflattering comparison of him to a certain wartime German leader with a distinctive moustache, the Kremlin-funded news channel Russia Today has hit back by highlighting the royal family's historical links to the Nazis.

The  pro-Russian broadcaster even posted a clip of the segment on Youtube with the title, "ROYAL NAZI TIES: Prince Charming and the SS." "If anyone knows real Nazis it's the royal family," said RT senior political correspondent Anissa Naouai before introducing a mocked-up photo album providing a pictorial guide to the House of Windsor's Nazi links.It featured a photograph of Charles's great uncle, the Duke of Windsor, visiting Hitler at his Obersalzberg retreat shortly after abdicating. Naouai commented that Edward, "hung out with Hitler".

RT went on to note that the Duke of Edinburgh's sister Sophie was married to an SS officer. 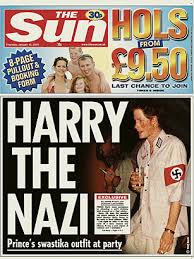 The channel showed photographs of Prince Harry dressed in a Nazi uniform at a party, and mocked, "Prince Charles's very own son likes to dress up like a Nazi even if it's just for Halloween," Naouai quipped.RT's intervention came after the prince sparked a diplomatic row during a private conversation with a Jewish survivor of the second world war. "Now Putin is doing just about the same as Hitler," Charles told Marianne Ferguson in reference to Russia's annexation of Crimea.