” … His primary career was riling up crowds at white supremacist rallies in language so vile that even some sympathizers were repulsed. … “ 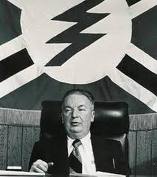 To the late Jesse “J.B.” Stoner Jr., Jews were Satan’s children and Hitler was “too moderate.” Blacks were “niggers” with small brains. The FBI — the “Federal Bureau of Integration” — was infested with Jews and its agents were “storm troopers.” At the height of the civil rights movement, by any measure, Stoner was a rabble-rouser and race-baiter extraordinaire.

But it turns out that his rhetoric was so rabid that many of his fellow bigots suspected Stoner was a front for the Anti-Defamation League (ADL) or the FBI even while he was a suspect in bombings at black churches and at schools integrating throughout the South. That rich irony emerges from 928 pages of FBI documents obtained recently by the Intelligence Report.

Stoner was a peculiar character. A lawyer who mostly defended like-minded racists, a lifelong bachelor and a perennial political candidate in Georgia, his primary career was riling up crowds at white supremacist rallies in language so vile that even some sympathizers were repulsed. Wherever there was racial tension — in Oxford, Miss., St. Augustine, Fla., Selma and Anniston, Ala., and Bogalusa, La. — the bow-tie clad Stoner would pop up like some pernicious version of Forrest Gump to fan the flames of hatred. He was, perhaps, the most malevolent racist in America.

One can only imagine Stoner’s fury had he known that Eugene “Bull” Connor, the brutal, pro-segregation, Klan-friendly police commissioner of Birmingham, Ala., was feeding intelligence about him to the FBI. One of Connor’s informants, according to the documents, said Stoner called him after a bombing attempt at a Birmingham church in 1958 to say, “I have just finished repairs on the church in Birmingham.” Then he asked when he could meet with the “Birmingham men about the money.” Nineteen years later, in 1977, Alabama authorities indicted Stoner in that case. He eventually was convicted and spent 3 years in prison. 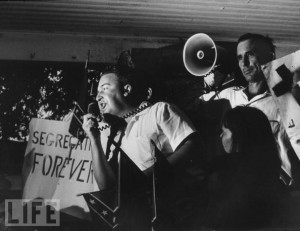 Connor wasn’t the only racist leery of Stoner. When Stoner traveled to Miami in 1959, a local white supremacist leader ordered his followers to shun him, whispering that Stoner was an agent of the ADL or the NAACP. Three months earlier, a Klan leader in Atlanta threatened to sue Stoner if he continued using the Klan’s name when recruiting people. Even American Nazi Party founder George Lincoln Rockwell wanted nothing to do with Stoner, saying his attacks on the FBI were antagonizing the public, according to the FBI file. Robert Shelton, imperial wizard of the criminally prone United Klans of America, distanced his group, too.

Stoner became so unhinged by constant FBI surveillance of him that he came to loathe the bureau even more than Jews and blacks. “When an FBI agent gets killed,” he told an informant, “I always go out and celebrate. When one got killed in Baltimore recently, I got so high I nearly couldn’t get home.”

Memos between FBI offices continually warned that Stoner should be considered “armed and dangerous.” At a rally in 1963, Stoner vowed that FBI agents would be tried for treason once his obscure National States Rights Party came to power. He told another crowd that any FBI informants who were identified would be tortured, a presumably nervous informant told the FBI. The most sensational threat, however, came from a snitch who said that Stoner was contemplating luring three or four agents into a trap, at which time he could kill them. He would do so in Columbus, Ga., “friendly territory,” he said, where the cops and courts would be sympathetic.

Despite the doubts some harbored about him, Stoner never cooperated with the FBI or civil rights organizations. His career as a professional racist forced him to live austerely, traveling by bus from one city to another, often broke. An FBI check of Stoner’s credit history when he was 39 revealed he had none. He told an informant in 1959 that he had an offer to join an Atlanta lawyer’s practice, but said he’d “rather spend his time fighting Jews than checking court records.”

In his final years, Stoner was gaunt, partially paralyzed by a stroke and fiercely unrepentant. His angry voice was finally stilled with his death in a nursing home in 2005. He was 81, alone, and, until almost the last minute, predicting that “God will put his hand on my head and bless me.”