Introducing the other Guantanamo 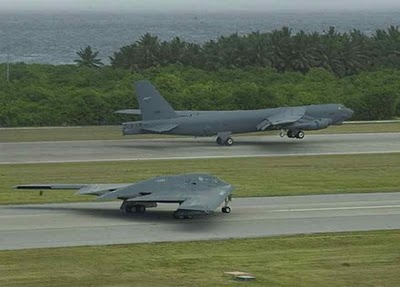 On the small, remote island of Diego Garcia, in the Indian Ocean halfway between Africa and Indonesia, the United States has one of the most secretive military bases in the world.

From its position almost 16,000 kilometers closer to the Persian Gulf than the east coast of the United States, this huge US air and naval base has been a major, if little known, launch pad for the wars in Iraq and Afghanistan.

In the past year, the George W Bush administration has made improvements that point toward its use in a possible attack on Iran. The administration recently admitted what it had long denied and what journalists, human-rights investigators and others had long suspected: the island has also been part of the Central Intelligence Agency’s (CIA’s) secret “rendition” program for captured terrorist suspects.

While few know about the base on Diego Garcia – it has long been off-limits to all non-military personnel – it is hardly better known how it came into being. To create the base, the United States, with the help of Great Britain, exiled all the indigenous people of Diego Garcia and the surrounding Chagos Archipelago.

Between 1968 and 1973, US and British officials forcibly removed about 2,000 people, called Chagossians, 2,000 kilometers away to islands in the western Indian Ocean. Left on the docks of Mauritius and Seychelles with no resettlement assistance, the Chagossians, whose ancestry in Chagos dated to the 18th century, have grown deeply impoverished in exile.

Diego Garcia has become another Guantanamo in more ways than one: the product of years of deception and lies, a far more secretive detention facility than the Cuban prison, the cause of immense suffering and pain for an entire people, it has become a mark of shame for the United States that must be repaired.

Creating a base, expelling a people

The Chagossians’ ancestors first settled the previously uninhabited Chagos Archipelago in the late 18th century when their ancestors were brought from Africa and India as enslaved and indentured laborers to build and work on coconut plantations run by Franco-Mauritians. Over nearly two centuries, this diverse group developed into a distinct, emancipated society and a people known initially as the Ilois – the Islanders.

While far from luxurious, their life by the mid-20th century was secure, generally free of want, and featured universal employment and numerous social benefits, including regular if small salaries, land, free housing, education, pensions, burial services, and basic health care in islands described by many as “idyllic”.

That is until the late 1950s, when US military officials identified Diego Garcia as a perfect location for a base. In many ways, the original idea for Diego Garcia presaged the “lily pad” basing strategy of today: facing a wave of decolonization, national security officials worried about rising local opposition to overseas US bases and the threat of eviction posed by local governments.

At the same time, officials increasingly wanted to introduce US military forces into the Indian Ocean as a way to exert control over the Middle East and surrounding areas of the decolonizing world. Their solution was what the US Navy called the “Strategic Island Concept”, a plan to identify small strategically located islands with small populations that the US or its Western allies could acquire as future base sites and that would be insulated from any local threats.

Quickly, Diego Garcia emerged as a prime target for acquisition, given its relative proximity to potential conflict zones from the Persian Gulf to southern Africa and southern Asia, space for harboring an armada of ships and an airstrip, and a small, little-known population whose removal would generate little attention.

In 1960, the US Navy began secret conversations with the British government about Diego Garcia. Over the next several years, US officials secured British agreement to turn the island into a military colony, called the British Indian Ocean Territory, and, as classified documents show, to provide “exclusive control” of Diego Garcia “without local inhabitants”.

The two governments finalized the deal with a 1966 “exchange of notes” that in key respects resembles the recent “declaration of principles” on the future US military presence in Iraq signed by the George W Bush administration and the Iraqi cabinet: it effectively created a treaty but circumvented all congressional and parliamentary oversight. Separate secret agreements provided for US$14 million in undisclosed US payments to allow Britain to create the territory and to take those “administrative measures” necessary to deport the Chagossians.

Those measures meant that beginning in 1968, islanders leaving Chagos for vacations or medical treatment on the island of Mauritius were barred from returning to their homes and marooned 2,000 kilometers away. British officials next began restricting supplies to the islands, and by the turn of the decade more Chagossians were leaving as food and medicines dwindled.

In cooperation with US officials, the British meanwhile designed a public relations plan aimed at, as one official put it, “maintaining the fiction” that the Chagossians were transient contract workers rather than people with roots in Chagos for five generations or more.

In 1971, the US Navy began construction on Diego Garcia and ordered the British to complete the removals. First, British agents and US soldiers on Diego Garcia herded up the Chagossians’ pet dogs and gassed and burned them in front of their traumatized owners. Then, British agents forced the people to board overcrowded cargo ships and left them on the docks in Mauritius and the Seychelles.

On arrival, the Chagossians received no resettlement assistance and soon found themselves living in what a 1975 Washington Post article called “abject poverty”. Numbering about 5,000 today and still in exile, most remain deeply impoverished.

Wars for oil and global dominance
While the Chagossians were being exiled, the Pentagon sold Diego Garcia to Congress as an “austere” communications facility. As its planners had always envisioned, however, it soon expanded dramatically. It was pressed into service almost immediately as a base for reconnaissance planes in the 1973 Israeli-Arab war. In the years that followed, the base played a central role in the first large-scale thrust of US military strength into the Middle East.

After the Iranian revolution and the Soviet invasion of Afghanistan in 1979, presidents Jimmy Carter and Ronald Reagan developed a “Rapid Deployment Force” (RDF) at bases in the region to respond to any future threats to US and Western oil supplies. As a main hub for the RDF, Diego Garcia saw the “most dramatic buildup of any location since the Vietnam War”.

Subsequently, the RDF transformed into the US Central Command (CENTCOM), which came to lead wars in Iraq and Afghanistan directly related to securing US and global oil supplies and maintaining the regional and global dominance of the United States. Diego Garcia played a critical role in each war. During the first Gulf War in 1991, Diego Garcia sent 18 prepositioned ships from its lagoon loaded with weaponry and supplies to outfit thousands of marines massing in Saudi Arabia while serving as a launch pad for long-range bombers attacking Iraqi forces.

After the 1991 war, the military began transforming the island into one of a handful of major “forward operating bases” as part of a shift of US forces eastward away from European bases. The dream for many in the military became the ability to strike any location on the planet from Barksdale air base in Louisiana, Guam in the Pacific or Diego Garcia.

Following the September 2001 attacks on the United States, the base assumed even more importance in the eyes of military officials. Within weeks of September 11, the Pentagon added 2,000 US Air Force personnel at a new 12 hectare housing facility called “Camp Justice”.

In the 2001 war, B-1, B-2 and B-52 bomber flights originating on Diego Garcia dropped more ordnance on Afghanistan than any other units. Leading up to the invasion of Iraq, weaponry and supplies prepositioned in the lagoon were again among the first to arrive at staging areas near Iraq’s borders. The once-secret 2002 “Downing Street” memorandum showed that US war planners considered basing access on Diego Garcia “critical” to the invasion. Bombers from the island ultimately helped launch the Bush administration’s tragic war that has led to the deaths of hundreds of thousands of Iraqis and thousands of US troops.

In early 2007, as the Bush administration was upping the tenor of its rhetoric against Iran and threatening another invasion, the Defense Department awarded a $31.9 million contract to build a new submarine base on the island. The subs can launch Tomahawk cruise missiles and ferry US Navy SEALs for amphibious missions behind enemy lines. Around the same time, the military began shipping extra fuel supplies to Diego Garcia for possible wartime use.

Long off limits to reporters, the International Committee of the Red Cross and all other international observers and far more secretive than Guantanamo Bay, many long suspected the island was a clandestine CIA “black site” for high-profile detainees.

Journalist Stephen Grey’s 2006 book Ghost Plane documented the presence on the island of a CIA-chartered plane used for rendition flights. On two occasions, former US Army General Barry McCaffrey publicly named Diego Garcia as a detention facility. A Council of Europe report named the atoll, along with facilities in Poland and Romania, as a secret prison.

For more than six years, US and British officials adamantly denied the allegations. This February, British Foreign Secretary David Miliband announced to parliament: “Contrary to earlier explicit assurances that Diego Garcia has not been used for rendition flights, recent US investigations have now revealed two occasions, both in 2002, when this had in fact occurred.”

A representative for US Secretary of State Condoleezza Rice said Rice called Miliband to express regret over the “administrative error”. The State Department’s chief legal adviser said CIA officials were “as confident as they can be” that no other detainees had been held on the island, and CIA director Michael Hayden continues to deny the existence of a CIA prison on the island.

Within days, United Nations special investigator Manfred Novak announced new evidence that others had been imprisoned on the island. Many suspect the United States may hold detainees on secret prison ships in Diego Garcia’s lagoon or elsewhere in the waters of Chagos.

Resistance and remedy
Since their expulsion, the Chagossians have protested in the streets, petitioned and held hunger strikes to regain the right to return to their homeland and win proper compensation for their expulsion.

In recent years, they have taken the US and British governments as well as former US government officials and military contractors to court over their claims. To date, US courts have found no wrongdoing on the part of the government, its officials, or contractors for what one judge described as the “improper misplacement of the plaintiffs”. The government has consistently denied all responsibility for the Chagossians.

In Britain, by contrast, the islanders have won three major victories over the British government. Three times – in 2000, 2006 and 2007 – the High Court in London has ruled the islanders’ expulsion illegal under English law. In June, the people will head to the House of Lords, Britain’s highest court, for the government’s final appeal over the right to return. Another victory could finally open the way for a return to Chagos.

With support for the Chagossians’ struggle growing in both the US and Britain at the same time that revelations about a secret CIA prison are spreading, the US must finally act to remedy the damage done by another Guantanamo damaging too many lives and undermining its international legitimacy.

The US must allow the Chagossians to return and assist Britain in paying them proper compensation; the US must close the detention facilities and open Diego Garcia to international investigators; the US must end the painful irony that is a base the military calls the “Footprint of Freedom”.

David Vine is assistant professor of anthropology at American University in Washington, DC. His book Island of Shame: The Secret History of Exile and Empire on Diego Garcia (Princeton University Press) will appear in spring 2009.

Previous Article
The Nazi Origin of the Olympic Torch Relay
Next Article
Movies at PBSBlog.com