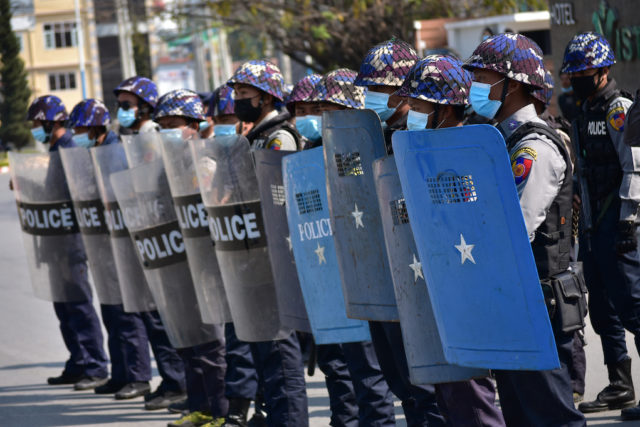 In March, the U.S. House of Representatives passed a resolution that censured the fascist military coup in Myanmar (or Burma) by a 398-14 vote. The dissenters were all Republicans and 13 were members of the pro-Trump Freedom Caucus. That included Colorado Reps. Lauren Boebert and Ken Buck.

The vote condemned the generals who orchestrated the coup and called for the Biden administration to place sanctions on them.

Then the military carried out a coup d’etat in February, claiming massive voter fraud without providing evidence. In May, an independent monitoring group called The Asian Network for Free Elections concluded that the outcome of the vote was “by and large, representative of the will of the people of Myanmar.” The Bangkok-based organization had observers at more than 400 polling stations during the election.

Other poll monitors including the U.S.-based Carter Center and Myanmar’s largest election observer group, People’s Alliance for Credible Elections (PACE), said in their reports that the election was largely free and fair with no major irregularities.

The coup brought an abrupt end to a decade-long period of democratic transition that followed the nation’s rule by a military dictatorship between 1988 and 2011. At least 800 civilians have been killed, and thousands have been arrested.

The Myanmar coup thrilled adherents of the QAnon conspiracy theories. Trump might lead a similar coup in the U.S.! “The Storm” — a violent apocalypse involving mass executions — would restore Trump to office.

Michael Flynn, Trump’s first national security adviser, has become one of the most influential QAnon figures. Appearing on Memorial Day weekend in Dallas at a QAnon conference, Flynn was asked during a Q&A session that was shared in a Twitter video: “I want to know why what happened in Myanmar can’t happen here?”

There were enthusiastic cheers. Then Flynn responded: “No reason. I mean, it should happen here.”

A recent Monmouth University poll found that 65% of Republicans believe that Biden’s win was entirely the result of voter fraud. However, election security experts and election officials of both parties concluded that the election was free and fair. The more than 60 lawsuits brought by Trump and his allies were total failures, as they couldn’t prove any of their allegations.

A recent poll by the Public Religion Research Institute and the Interfaith Youth Core discovered that 14% of Americans, including about one in four Republicans, think that the U.S. is being run by a cabal of cannibalistic Satan-worshipping pedophiles, that “American patriots may have to resort to violence” to overthrow that cabal, and that a “storm” will soon “restore the rightful leaders.” Those three statements are core QAnon beliefs.

The scholars also criticize GOP lawmakers for pushing “what we consider radical changes to core electoral procedures in response to unproven and intentionally destructive allegations of a stolen election,” adding: “Collectively, these initiatives are transforming several states into political systems that no longer meet the minimum conditions for free and fair elections. Hence, our entire democracy is now at risk.”

“We urge members of Congress to do whatever is necessary — including suspending the filibuster — in order to pass national voting and election administration standards that both guarantee the vote to all Americans equally, and prevent state legislatures from manipulating the rules in order to manufacture the result they want,” the scholars write. “Our democracy is fundamentally at stake. History will judge what we do at this moment.”

They support the reforms in the For the People Act, which protects the right to vote, ends partisan gerrymandering and curbs the flood of money into elections.

One of the scholars, Pippa Norris, a Harvard University political scientist, says: “The sixth of January was the warning bell. The stress test of the 2022 midterm elections is fast approaching. Other countries have seen democratic breakdown. This is not alarmism. Alas, it’s real.”

This opinion column does not necessarily reflect the views ofBoulder Weekly.