Also see: “The Suppressed Fact: 100 Deaths by U.S. Torture” (Q: Did the CIA tell “liar” Nancy Pelosi about the 100 “detainees” they “interrogated” to death? This is one more nail in the GOP coffin, IMhO, and Leon Panetta can start hunting for a new job … – AC) 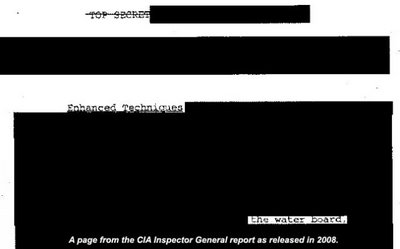 House Intelligence Chairman Silvestre Reyes has suggested Republicans would be well advised to avoid politicizing the intelligence authorizaton bill later this week in light of evidence that, he says, shows that the CIA “affirmatively lied to” the panel.

In a Tuesday letter to his committee’s top-ranking Republican, Peter Hoekstra of Michigan, that was obtained by Congressional Quarterly, Reyes, D-Texas, wrote that the committee has recently received information that reveals significant problems with the intelligence agency’s reporting to the panel.

“These notifications have led me to conclude this committee has been misled, has not been provided full and complete notifications, and (in at least one occasion) was affirmatively lied to,” Reyes wrote.

Reyes did not describe or detail the alleged false or misleading statements to the committee.

“This agency and this director are committed to a candid dialogue with Congress,” said CIA spokesman George Little. “When Director Panetta believes something should be raised with Hill, it gets done quickly and clearly. Our oversight committees recognize that.”

Republicans contend a provision of the fiscal 2010 bill (HR 2701) scheduled for floor action Thursday would modify congressional notification procedures to provide political cover for Speaker Nancy Pelosi. Such briefings are a sensitive political topic, because Republicans have repeatedly criticized Pelosi over what she knew and when about the Bush administration’s use of harsh interrogation techniques and her assertion that the CIA “misled” Congress on that topic.

The executive branch is required by the National Security Act of 1947 to keep the House and Senate Intelligence committees “fully and currently” informed about intelligence activities.

“Like you, I was greatly concerned,” Reyes told Hoekstra, about what he committee learned on June 24 and another unspecified date from CIA Director Leon E. Panetta . “As you know, I have begun to take steps to gather information on the recent notifications,” Reyes wrote. “This may well lead to a full committee investigation. I believe that you share my concern, and I look forward to working on this issue with you.”

“We’re not going to respond to something so unprofessional as a letter that was slipped under the Republican staff director’s door after hours after everyone had gone home for the night,” said Jamal Ware, a spokesman for Hoekstra and Intelligence Committee Republicans. “It’s been two weeks since this [notification from Panetta] happened, per their letter, and they’ve not tried to have any conversations with the ranking member.”

The pending authorization bill would eliminate the executive branch’s right to decide when to brief the full Intelligence panels, as opposed to top committee and congressional leaders, on the most sensitive intelligence activities. Instead, Congress would set the ground rules for the so-called “Gang of Eight” briefings.

Hoekstra said in a June 18 statement that committee Democrats were trying to assist Pelosi.

The CIA earlier gave lawmakers a document indicating that she was briefed on the use of harsh interrogation methods that she criticized the Bush administration for using. That prompted the Speaker to say the CIA “misled” Congress.

“As we go to the floor [with the authorization bill], I hope that we can focus on the merits of the legislation,” Reyes wrote. “I hope we can avoid questions of who knew what and when.