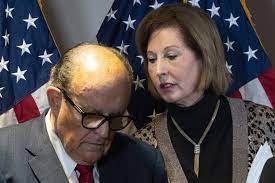 In the weeks after Trump’s loss last year to Joe Biden, Powell vowed to “release the Kraken” in a series of lawsuits that alleged massive and coordinated fraud in the election. Those lawsuits were all tossed out of court, and an Arizona judge ruled that its claims were completely free of supporting evidence.

Powell is currently facing sanctions and is being sued for defamation by Dominion Voting Services, but has argued that the case should be thrown out because “no reasonable person” would believe her claims.

The Legal Defense Fund for the American Republic was created by the Election Integrity Funds for the American Republic and lists a P.O. box in Florida as its address. The website claims that it is raising money for a variety of reasons including the Arizona effort, litigation in Georgia and Pennsylvania, an investigation in Michigan and a “Cyber Election Fraud” investigation fund.

The P.O. box listed is the same as one for a legal fund created for Powell’s election fraud lawsuits that was created by long-time Republican party donor Robert Matheson.

A previous version of the site said that it was “not directly connected to Sidney Powell’s legal defense fund,” according to reporting by The Daily Beast. However, the site still uses the name the Legal Defense Fund for the American Republic, which was the original name for the group that was helping fund Powell’s Kraken lawsuits.

Ken Bennett, the liaison between Senate Republicans and the auditors, said he had no idea if the group was actually funding the audit. He said that lead firm Cyber Ninjas, the company with no election or auditing experience that is led by a conspiracy theorist who believes the election was rigged and whose work Powell has touted in the past, hasn’t disclosed anything to him.

“If the Ninjas knew that this is a source of funding that is coming to them, then it is up to them to get the word out,” Bennett told the Arizona Mirror.

Bennett said he was unaware of the fund until someone sent him an interview with Michigan attorney Matthew DePerno, who unsuccessfully sued to try to force an audit of Antrim County’s election results, talking with Steve Bannon about the fund. Doug Logan, the CEO of Cyber Ninjas, was involved in that effort.

“They have not discussed it with me,” Bennett said of the private organizations that are paying Cyber Ninjas to do the Arizona election review. “I’ve never been involved in whether or how much or when or who.”

The Senate agreed to pay the company $150,000, but outside organizations have popped up with goals of raising more than $3 million to pay for the work.

Bennett said he was also unaware of accusations made on the website raising money for the Legal Defense Fund for the American Republic that CyFir, one of the subcontractors working under Cyber Ninjas, had allegedly “discovered security breaches” of voting systems in multiple states. Ben Cotton, the CEO of CyFir, who is attributed to making the discovery, has walked back similar bombastic claims in the past.

Bennett said Cotton has never discussed any findings from any other state with him.

The fund is also connected to the Foundation for the American Republic, a non-profit that funds “influencers” and “investigative journalists” who are focused on “election integrity.” A video on the group’s site showcasing some of the people they support includes right-wing disinformation peddlers such as Kalen D’almeida and Fog City Midge.

Funding for the ballot review has been opaque, with the Senate denying requests for records and information related to who is helping pay for the process.

The Arizona Republic is suing the Senate and Cyber Ninjas for records related to funding and how Cyber Ninjas is conducting its work.

Neither Cyber Ninjas or the new fund allegedly raising money for the audit responded to requests for comment.