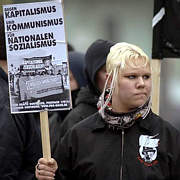 Two young women who lost their jobs because of their association with Germany’s far-right scene have formed a group to help other ‘persecuted’ women. It is part of a growing trend of women becoming more prominent on the extreme-right scene.

A young far-right woman at a demonstration. Her placard says: “Against Capitalism, Against Communism, For National Socialism.” Iris Niemeyer feels angry, betrayed and persecuted. In her mid-30s, educated and articulate, Niemeyer is furious about having lost her job as a social worker because of her political beliefs. She is so appalled that she has set up a group to defend women in similar situations. Women like her — women from Germany’s far-right scene.

Together with Sigrid Schüssler, an actress who also faced employment difficulties due to her political affiliation, Niemeyer has set up the women’s self-help group Jeanne D. The group’s declared purpose is to help women who have been politically persecuted. “The group is open to all women who have a nationalist, patriotic world view,” Niemeyer told SPIEGEL ONLINE. “Those very women who are currently facing fierce persecution.”

In Niemeyer’s case this “persecution” arose when she lost her job at a youth center in the village of Mesum in the western state of North Rhine-Westphalia last year. According to Matthias Fischer, one of her former colleagues, the center received an e-mail on Oct. 26, 2007 telling them that they had a member of the far-right on the staff. The message included photos of Niemeyer at a rally for the right-extremist National Democratic Party of Germany (NPD) and at an information stand for its affiliated women’s organization Ring Nationaler Frauen (Ring of Nationalist Women or RNF).

Niemeyer was called in that very day and asked to explain herself. When she admitted that she held far-right political views she was told she was no longer employed at the center, where she had worked freelance for six months.

“We were so surprised,” Fischer told SPIEGEL ONLINE. “There had been no indications that she was involved in the far-right scene — nothing in her conversation or her work.” Niemeyer immediately hired a lawyer and threatened to appeal her dismissal. The two sides eventually settled out of court and she received two months wages.

Niemeyer has since become the local chairperson of the NPD in a small region north of Münster, but she rejects the term neo-Nazi or right-wing extremist, preferring to call herself a “patriot” and “nationalist.” Germany’s domestic intelligence agency, however, describes the NPD has having a marked affinity with Nazi ideology and labels it “racist, anti-Semitic and revisionist.” An attempt to outlaw the party failed in 2003 and it continues to get state funding, consistent with Germany’s campaign finance laws.

‘I Am a Complete Victim’

Through contacts at the Ring Nationaler Frauen, Niemeyer hooked up with Schüssler, who also felt politically persecuted. The trained actress from Karlstein-am-Main in Bavaria had been organizing children’s plays at daycare centers, schools and festivals — and at NPD events. A local left-wing group started to distribute flyers accusing her of having racist undertones in a show where she enacts the Brothers Grimm fairytale about a frog.

Schüssler says that as soon as her booked appearances were publicized, they were cancelled within two days. She says her business is now effectively “dead.” “I am a complete victim,” she told SPIEGEL ONLINE. “I was accused of indoctrinating children, something that is totally out of keeping with the way I do things, with my convictions, with my beliefs.”

It was Schüssler who came up with name Jeanne D., a reference to the Joan of Arc depicted in Schiller’s play of the same name. “She was a woman who felt called to free her country and that is also something close to our hearts,” Schüssler says.

While Schüssler emphasizes the emotional support that the group can provide women, allowing them to exchange ideas and experiences, and even offering alternative remedies and meditation, Niemeyer is the more political of the two. She says Jeanne D. plans to document and archive instances of persecution, and help women who have lost their jobs or been otherwise persecuted gain access to legal advice. “Many women don’t know where to look for help, or how to defend themselves,” says Niemeyer.

The group is already attracting members and has even had the first enquiries from abroad — a woman in Austria contacted them recently wanting to join. “I am now trying to get funding at a state level and from the European Union,” Niemeyer says. The group hopes eventually to provide financial support to women who have lost their jobs or income due to their far-right beliefs.

Talk to both Schüssler and Niemeyer and it becomes clear that a sense of victimization is the driving force behind the founding of Jeanne D. Renate Bitzan of the University of Göttingen, who has written extensively on far-right women, says that they often “like to portray themselves as victims of the system.” They claim that they are completely innocent, and that their “political persecution” shows that there is no true democracy in Germany. “The poor German people suffering because of oppression — that is a constant rhetorical device,” says Bitzan.

“One has to keep in mind the long-term goals of a party like the NPD or other extreme-right groups,” Bitzan told SPIEGEL ONLINE. “It’s not really about intensifying or improving democracy but rather about limiting it and creating an authoritarian society.”

Using Democracy’s Tools to Get Rid of Democracy

Rena Kenzo of the Research Network into Women and Right-Wing Extremism has also examined Germany’s mushrooming female far-right scene, including Jeanne D. She agrees that people of this political hue like to see themselves as victims wherever their ideology is opposed. “They themselves have a racist, anti-Semitic, homophobic and anti-feministic view of mankind,” Kenzo says. While their aim is to get rid of democracy, she points out that they are perfectly happy to use the structures of today’s democracy in that pursuit.

Jeanne D. is part of a wider phenomenon of women becoming increasingly active in the far-right scene. “They have always been there, but before they were usually in the background,” Bitzan says. Now, however, they are in the public eye more often and there is a flourishing of far-right women’s organizations in Germany with around 20 different groups, including those organizing young neo-Nazi women to go to demonstrations.

The change is marked. Far-right women have traditionally tended toward less prominent roles, such as visiting prisoners or focusing on family policy, for example by forming working groups on issues like child-rearing and spreading German customs — the so-called “cultural side” of politics. However, there is now an increasing emphasis on what some might describe as a kind of post-feminism, one that uses the language of the women’s movement.

According to Kenzo, many women aspire to positions of power within the far-right scene but are often blocked by the patriarchal structures there. Niemeyer, for example, says that while there are men in the party who have a “very old, traditional image” of women’s role, she sees herself as “very modern.” But while these groups like to don the garb of feminism, emphasizing things like assertiveness and equality, Bitzan points out that they mostly still adhere to very traditionalist views of women’s role in society. And their ideological framework is always primarily nationalist and racist.

This is what makes it all the more worrying when such women work in education and with children, Bitzan warns. “Even if they claim that their work is non-political, they still convey a certain stance.” Kenzo argues that “children and young people have a right to receive an education and pedagogy that respects people, without either open or subtle discrimination.”

Nevertheless, the NPD, the RNF and groups like Jeanne D. are not illegal, meaning membership should not be a grounds for losing one’s job. Bitzan admits that there is a “legal gray area” here but argues that when it comes to areas of childcare and education, democratic society has to be particularly vigilant in hiring staff who promote democratic values and are against all forms of discrimination.

In the case of Niemeyer, she has since argued that her work at the youth center was “neutral” and in no way connected with her politics. Her former co-worker Fischer, dismisses this claim outright. “You cannot separate her work from the fact that she was involved in a xenophobic organization.” At the Mesum center Niemeyer worked with children aged 7-13, many with immigrant backgrounds, although she claims that she made sure, for example, that Muslim children did not have to eat pork.

Bitzan says this is not at all incompatible with having a racist ideology. “It fits totally with the idea of ethnopluralism. The idea that various ethnicities and peoples are so different that they shouldn’t mix.”

For many communities it still would never even enter their heads that a teacher or social worker could also be active on the far-right scene. After all these professions are largely, though not exclusively dominated by women — educated women. It doesn’t fit into the popular stereotype of the jackbooted neo-Nazi (male) skinhead. However, it is part of a trend that sees groups like the NPD trying to present themselves as less threatening and more a part of mainstream society — by getting involved in sports groups, youth centers and other community organizations, for example. And this march of women through their ranks is helping to give them a much-appreciated face-lift.

“These women appear very moderate and eloquent, friendly and supportive,” says Bitzan. “That does not mean that they don’t have a racist ideology.” By pushing its women to the fore, the far-right is hoping to improve its image within Germany, she warns. “That doesn’t make them any less dangerous — quite the opposite.”