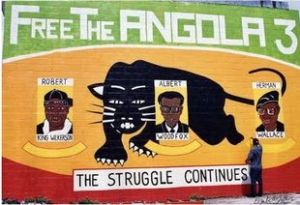 Version One, from GulfNews.com:

... Amnesty International (AI) has urged Louisiana authorities to end immediately the isolation of two inmates who have ben incarcerated since 1972 in the biggest prison in the US.

The group has been campaigning to deliver a petition carrying the signatures of 65,000 people from 125 countries to Louisiana Governor Bobby Jindal last week urging him to end the isolation of Albert Woodfox and Herman Wallace.

Angola is the name of the prison in which both Woodfox, 65, and Wallace, 79, were already serving a term for armed robbery in the early seventies. But in 1972, they were convicted of murdering a prison guard — a charge they consistently denied.

Instead, they said they were targeted because they helped establish a prison chapter of the Black Panthers, an African-American revolutionary leftist organisation that was active in the US in late sixties and seventies, and was described by the FBI as "the greatest threat to the internal security of the country".

The two men were convicted and placed in solitary confinement, where, apart from a short spell in 2008 in a high security dormitory, they have remained ever since.

"Legal aspects of the case against Albert Woodfox and Herman Wallace are deeply troubling," said Fabian Goa from Amnesty International in the US.

"No physical evidence linking the men to the guard's murder has ever been found; potentially exculpatory DNA evidence has been lost; and the convictions were based on questionable inmate testimony," he added in a statement to Gulf News.

"Over the years, documents have emerged suggesting that the main eyewitness was bribed by prison officials into giving statements against the men and that the state withheld evidence about the perjured testimony of another inmate witness. A further witness later retracted his testimony," he said. ...

Version Two, from the Associated Press:

Amnesty International delivered a petition to Gov. Bobby Jindal, calling on Jindal to remove the men from isolation in the Louisiana State Penitentiary at Angola. The petitions contained 65,000 signatures from people around the world who call the confinement inhumane.

Sixty-five-year-old Albert Woodfox and 70-year-old Herman Wallace were serving sentences for armed robbery in 1972 when they were charged and convicted with fatally stabbing a guard at the Angola prison and moved to solitary confinement.

Jindal didn't seem poised to intervene to remove the men from isolation. The governor's spokesman deferred all questions to the Department of Corrections.