For Next 10 Months, Rubio-Crist Will Be a National Story – Will Broward Scandals Play Role?

​It would have been a more fortuitous sign for Marco Rubio if Doug Hoffman hadn't lost his congressional race in upstate New York, but the fact that a Conservative Party candidate won 45 percent of the vote has Rubio more hopeful than ever. The same can be said for the right wing of the Republican Party, which is now treating Florida Senate seat as its biggest priority.

The Wall Street Journal is so eager to cover that it treated the New York campaign as a mere undercard to the Rubio-Crist title bout in August. The article makes no mention, however, of the scandals brewing in Broward County among some of Crist's most active supporters. 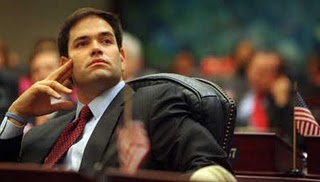 We already know that in the midst of a federal investigation, Hollywood ophthalmologist and Republican fundraiser Alan Mendelsohn tried to cut a deal with agents by luring Crist's office into a more candid discussion of favors it allegedly did for Joel Steinger's Mutual Benefits -- which faces charges of being an investment fraud. Daily Pulp was first to report on that connection.

And yesterday, with the return of another major Crist fundraiser and alleged Ponzi schemer, Scott Rothstein, it's fair to wonder whether he'll offer information about his relationship with Crist in exchange for a lighter sentence.

So while it's clear that Rubio has gained lots of traction by linking Crist to Obama's stimulus package, much-loathed among conservatives, a Crist corruption scandal could be the factor that puts Rubio over the top.