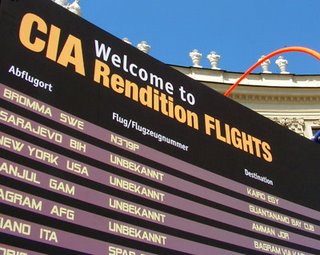 A former U.S. government employee, accused by Italy of participating in a CIA-organized kidnapping of a militant Egyptian-born cleric in Milan, has sued the State Department demanding that it invoke diplomatic immunity to quash any prosecution.

Italian officials charge that Sabrina De Sousa, 53, was one of 26 U.S agents who grabbed Hassan Mustafa Osama Nasr, known as Abu Omar, in February 2003 and flew him to Egypt, where he says he was imprisoned and tortured. Nasr has since been released.

De Sousa, a naturalized U.S. citizen who was born in India, says she was ordered not to travel abroad because of the fear of arrest, preventing her from visiting her mother in India and siblings in Europe. De Sousa quit her job in the federal government in February.

Italian officials charge that the disappearance of Nasr was part of a CIA rendition program in which the agency abducted suspected terrorists and took them to third countries for interrogation.

De Sousa worked as a consular official in Milan and said in court filings that she was on a vacation at the time of Nasr’s disappearance.

“Even if the allegations were true, though, her actions clearly fell within the scope of her official duties and thereby entitle her to diplomatic/consular immunity,” according to the lawsuit, first reported in the New York Times.

Asked whether she had been a CIA employee, her attorney, Mark Zaid, said De Sousa had been “a federal employee working for the State Department.”

The CIA declined to comment. A spokesman for the State Department said he could confirm her stated employment record but would not comment further about her because the case is in litigation.

De Sousa said in a phone interview that she repeatedly asked government agencies why diplomatic immunity had not been invoked and was forced to sue because she did not get a satisfactory response.

“This is a political thing that needs to go away once and for all,” she said of the prosecution.

Italian prosecutor Armando Spataro has issued arrest warrants for 26 U.S. officials, including De Sousa, named as one of the four principal figures in the alleged kidnapping. All were indicted in 2007.

The prosecution was set back this year when an Italian court said certain evidence was inadmissible because prosecutors had violated state secrecy laws, but prosecutors have vowed to press forward. A hearing is set for this month.

De Sousa said the Italian prosecution raises important concerns for government employees overseas. “If you’re going to fight this war on terror, are you going to protect your people?” she asked.

Ward Churchill should not be Reinstated
May 17