Excerpt: Into the Psyche of Eustace Mullins
By Graeme Wood
The Atlantic | September 23, 2010 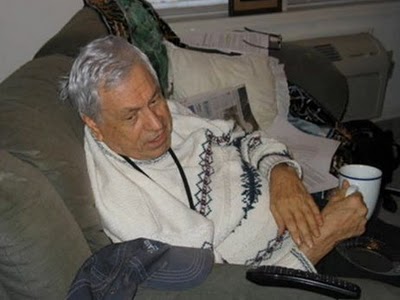 … Mullins died in February at 86, and when I visited him in Staunton, Virginia, six years ago on assignment for The Jewish Daily Forward, he was already slowed by age, living in a creepy, dark rat-trap filled with religious icons, votive candles, and old newspapers. ….

He told me that things were getting worse for the enemies of the Jews, and where once they came at him as single spies, now they attacked in battalions. They had tried to kill him seven times, most recently by cutting his brakelines.

They were everywhere. To find them, he said, watch CNN. David Duke showed up on the news via satellite up-link from the Tehran Holocaust-denial conference, and Mullins identified him immediately as an agent of Zion: no true enemy of the Jews could get airtime on a major network. “He’s a playboy. Some Jew must have taken him to Hollywood and given him a big pompadour. He looks like a homosexual from the most homosexual part of New York.” Duke, he said, was peddling ersatz Jew-hatred at the behest of the Jews themselves, as a way to discredit the anti-Semitic cause. Sharing airtime with Wolf Blitzer, he said, is its own proof of intellectual bankruptcy (admittedly not the craziest thing I ever heard).

Mullins was himself rumored to be gay. He never married. In 1968, he wrote that Jewish parasites had spawned “a massive wave of homosexuality and degeneracy in America,” and that the rise of American Jewry had caused Gentile men to take on female secondary sexual characteristics. Mullins bragged to me about having spent a night with Allen Ginsberg in Manhattan. “He didn’t bother me at all,” Mullins said with a naughty smile, “which was rather insulting, because I considered myself a pretty good-looking guy.”

On the second question — how anti-Semitism could co-exist in the same brainpan with discerning opinions on art and poetry — I came away simply wondering why I ever thought literary talent (or in Mullins’s case, mastery of literary biographical trivia; even in dotage, he still had thoughtful opinions not just about Pound and T. S. Eliot but also about relatively minor figures like Richard Aldington, and the little-read poetry of Ford Madox Ford) was some defense against psychosis. Perhaps I should have known better.

The Forward accepted my story but never published it, due to objections from lawyers who noticed that Mullins was also incredibly litigious, demanding million-dollar judgments from everyone who slighted him. I suppose I should thank the lawyers for that decision. Mullins’s influence was waning; he said that at his last speaking engagement in Oakland, California, the audience consisted of “one colored woman and a couple of elderly people.” The cost of hiring lawyers wouldn’t have been worth the pleasure of ridiculing him. In death there will be plenty of time for that. 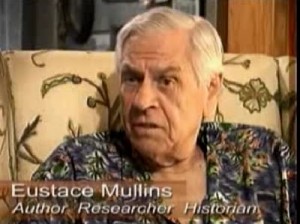