Maybe he should have taken traveler’s checks.

But it’s too late for that now. All the money – $16,000 in cash – that Joseph Rivers said he had saved and relatives had given him to launch his dream in Hollywood is gone, seized during his trip out West not by thieves but by Drug Enforcement Administration agents during a stop at the Amtrak train station in Albuquerque.

An incident some might argue is still theft, just with the government’s blessing.

Rivers, 22, wasn’t detained and has not been charged with any crime since his money was taken last month.

That doesn’t matter. Under a federal law enforcement tool called civil asset forfeiture, he need never be arrested or convicted of a crime for the government to take away his cash, cars or property – and keep it.

Agencies like the DEA can confiscate money or property if they have a hunch, a suspicion, a notion that maybe, possibly, perhaps the items are connected with narcotics. Or something else illegal.

Or maybe the fact that the person holding a bunch of cash is a young black man is good enough.

“What this is, is having your money stolen by a federal agent acting under the color of law,” said Michael Pancer, a San Diego attorney who represents Rivers, an aspiring music video producer. “It’s a national epidemic. If my office got four to five cases just recently, and I’m just one attorney, you know this is happening thousands of times.”

A Washington Post investigation last year found that local, state and federal agents nationwide have seized $2.5 billion in cash from almost 62,000 people since 2001 – without warrants or indictments. It’s unknown how many got their money back.

It happened, Rivers said, to him on April 15 as he was traveling on Amtrak from Dearborn, Mich., near his hometown of Romulus, Mich., to Los Angeles to fulfill his dream of making a music video. Rivers, in an email, said he had saved his money for years, and his mother and other relatives scraped together the rest of the $16,000.

Rivers said he carried his savings in cash because he has had problems in the past with taking out large sums of money from out-of-state banks.

A DEA agent boarded the train at the Albuquerque Amtrak station and began asking various passengers, including Rivers, where they were going and why. When Rivers replied that he was headed to LA to make a music video, the agent asked to search his bags. Rivers complied.

Rivers was the only passenger singled out for a search by DEA agents – and the only black person on his portion of the train, Pancer said.

In one of the bags, the agent found the cash, still in the Michigan bank envelope.

“I even allowed him to call my mother, a military veteran and (hospital) coordinator, to corroborate my story,” Rivers said. “Even with all of this, the officers decided to take my money because he stated that he believed that the money was involved in some type of narcotic activity.”

“These officers took everything that I had worked so hard to save and even money that was given to me by family that believed in me,” Rivers said in his email. “I told (the DEA agents) I had no money and no means to survive in Los Angeles if they took my money. They informed me that it was my responsibility to figure out how I was going to do that.”

Other travelers had witnessed what happened. One of them, a New Mexico man I’ve written about before but who asked that I not mention his name, provided a way for Rivers to get home, contacted attorneys – and me.

“He was literally like my guardian angel that came out of nowhere,” Rivers said.

Sean Waite, the agent in charge for the DEA in Albuquerque, said he could not comment on the Rivers case because it is ongoing. He disputed allegations that Rivers was targeted because of his race.

Waite said that in general DEA agents look for “indicators” such as whether the person bought an expensive one-way ticket with cash, if the person is traveling from or to a city known as a hot spot for drug activity, if the person’s story has inconsistencies or if the large sums of money found could have been transported by more conventional means.

“We don’t have to prove that the person is guilty,” Waite said. “It’s that the money is presumed to be guilty.”

DEA agents may choose to ask the person whether his or her possessions can be searched in what is called a “consensual encounter.” If the subject refuses, the bags – but not the person – can be held until a search warrant is obtained, he said.

Waite said that he could not provide exact figures on how often seizures occur in Albuquerque but that last week the DEA had five “consensual encounters” that resulted in seizures.

Whatever is seized is held during an internal administrative process (read: not public) while a case is made to connect the property to narcotics. Subjects can file a claim to have the items returned – and then they wait, sometimes forever.

While travelers like Rivers still have to worry about DEA agents, state and local law enforcement in New Mexico no longer has these virtually unlimited seizure powers. Five days before Rivers’ encounter in Albuquerque, Gov. Susana Martinez signed into law a bill that bars state and local law enforcement from seizing money or property under civil asset forfeiture. The law takes effect in July.

But the new state law won’t supersede the federal law, meaning federal agencies such as the DEA are still free to take your cash on arguably the flimsiest of legal grounds.

Meanwhile, Rivers is back in Michigan, dreaming, praying.

“He’s handed this over to God,” his attorney said.

Which seems infinitely safer than handing over anything further to government agents. 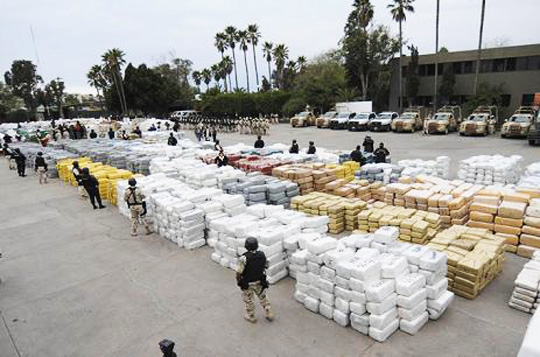 CONFIRMED: The DEA Struck A Deal With Mexico’s Most Notorious Drug Cartel
Jan 17

CONFIRMED: The DEA Struck A Deal With Mexico’s Most Notorious Drug Cartel