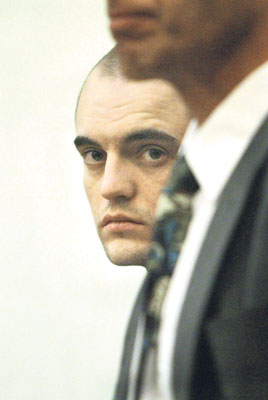 The trial of a young Napa man accused of shooting an elderly male acquaintance in 2007 got under way Monday with opening statements from defense attorney Jess Raphael and Napa County Deputy District Attorney Gary Van Camp.

Van Camp told the jury of 12 that Alex Taylor, 26, deliberately and intentionally shot George Davis, 62, on April 22, 2007, at Davis’ home in a retirement apartment complex on Redwood Road.

Raphael repeatedly stressed to the jury that Davis, who taught Taylor and others about witchcraft and ran a cult of sorts, had a “hold” over Taylor and used his “powers” to control him.

Taylor has pleaded not guilty, or that if he is found guilty that he is guilty by reason of insanity, but Van Camp said Taylor should be held responsible.

“The defendant shot the victim five times at the victim’s apartment. He left the apartment, changed his clothes and hid the weapon in a shed,” Van Camp said.

“He’s blaming his mental illness and his ruined military career for this,” Van Camp said. “Mr. Taylor owed money to the victim.”

Van Camp also told the jury that Davis had talked about suicide and suggested Taylor assist in him ending his life.

Both Van Camp and Raphael noted to the jury that Davis practiced witchcraft and had several young people sign a contract stating that Davis had power over their lives.

Taylor told investigators that he believed Davis could put a curse on a person’s life, said Raphael, a deputy in the Napa County Public Defenders Office.

Since Taylor has pleaded both not guilty and not guilty by reason of insanity, his trial will have two phases. He first will be tried by a jury that will determine if Taylor is guilty of murder. If Taylor is found guilty, the same jury will listen to mere evidence to decide if he was sane at the time of the killing.

The trial is expected to last about six weeks.

If found guilty, Taylor is facing 25 years to life in prison.

Davis’ body was discovered by another acquaintance. The man called 911 after finding Davis in the bedroom with gunshot wounds to his head. Taylor showed up at the apartment some time later and consented to be interviewed at the police station. He was arrested after the interview.