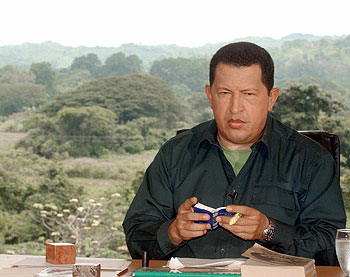 What does the founder of the U.S. House of Representatives Task Force on Terrorism and Unconventional Warfare, the son of an advisor and close friend of Cuba’s former Dictator Fulgencio Batista, and the great-grandson of the legendary Baseball Hall of Famer, Connie Mack, all have in common?[1]

They are all Florida residents, staunch Republicans, anti-Castro Cuban activists, government officials, and they all participated in the newly-released scandalous half-hour American Security Council Foundation “documentary,” which spins lies and unsubstantiated claims to paint Venezuela’s democratically-elected President Hugo Chavez as a maniacal dictator attempting to take over the Western Hemisphere.

The only person missing from the trio is Otto Reich, who is prominently interviewed in the film. Reich, an anti-Castro Cuban-born former US intelligence officer, played an active role in the Iran-Contra scandal and the 2002 coup d’etat against Chavez. He also is the former director of the covert Office of Public Diplomacy for Latin America and the Caribbean (OPD), which among other things waged a propaganda campaign on the American people in support of Reagan Administration interests in Central America in the 1980s. Now, with “Crisis in the Americas,” it appears that Reich and the American Security Council Foundation are playing their old propaganda cards; this time with the focus on Venezuela.

The Office of Public Diplomacy

In 1983, the Reagan government founded the OPD with Reich at its helm. According to Greg Grandin in his recent book Empire’s Workshop, the OPD was “officially charged with implementing a ‘new, nontraditional’ approach to ‘defining the terms of the public discussion on Central American policy.'” Staffed by psychological warfare operatives from the CIA and the U.S. Army, the new office created a propaganda machine of unsubstantiated lies and misrepresentations, which it disseminated to the American people by covertly placing news in the US media.[2]

According to a 1988 Propaganda Review article by Peter Kornbluh, Reich and his staff disseminated countless documents and pamphlets “to hundreds of civic groups, rotary clubs, and university audiences, [which] were invariably filled with innuendo, rhetoric, and misinformation, meant to cast the [Nicaraguan] Sandinistas in the worst possible light and the contras in the best.”

“In its effort to manipulate the media and the public mindset, OPD employed a tactic the CIA frequently uses in foreign countries planting articles and stories in the press under the names of third parties. Known in the intelligence community as “white propaganda,” these activities were conducted inside the United States with the full knowledge of the White House.”[3]

Additionally, the OPD coordinated with PR firms to help Administration Officials frame their debate. As Grandin points out, one 1985 PR “action plan” encouraged the use of simple loaded phrases to paint the Nicaraguan Sandinistas as “evil,” Soviet “puppets,” “racist and repress human rights,” and “involved in US drug problems,” the “military buildup,” “the drug connection,” “human rights violations,” and the “communist connection.”[5]

The office also attempted to shift the debate from communism to terrorism, accusing the Sandinistas of having terrorist ties with the Middle East, or of “anti-Semitism.”

“By flooding the media with questionable facts and allegations, the OPD forced Reagan’s opponents to dissipate their energies disproving allegations rather than making their own positive case for nonintervention.”[6]

The office was widely criticized after its involvement in the Iran-Contra Scandal, and Congress ordered that it be shut down by for engaging in a “prohibited convert propaganda operation.” Nevertheless, as the New York Times reported at the end of 1987, “State Department officials say they will simply reorganize the office, distributing its functions to other parts of the department.”[7]

Reich continued with the State Department through the 1980s, coincidentally as Ambassador to Venezuela, and was brought back in George W. Bush’s first term as Assistant Secretary of State for Western Hemisphere Affairs and a subsequent nomination as Special Envoy to the Western Hemisphere in 2002, where it appears he played a fairly substantial role in assistance to Pedro Carmona Estanga and other leaders of the short-lived 2002 coup d’etat against Venezuelan President Hugo Chavez.[8]

The official Office of Public Diplomacy may have been closed nearly twenty years ago, and Reich may no longer be with the White House, but he still knows how to play his cards, and he pulls out all of the stops in “Crisis in the Americas.”

Nearly all of the PR catch phrases and allegations used by the OPD against the Sandinistas on the American people are once again employed against Venezuela in the documentary. It is not the first time. Countless unsubstantiated reports against Venezuela have riddled the Internet and the mainstream press since President Chavez came in to office in 1998.[9] This is, however, the first time all of these claims have been formulated in to a concise half-hour documentary, which goes so far as to call for US military intervention in Venezuela to liquidate the Chavez “threat.”

The movie, like a page straight out of the OPD, attempts to link Chavez to terrorism, drug-trafficking, violence, despotism, Cuban communism, stolen elections, the axis of evil, and “radical Islam” with quick sound-bites, Orwellian double-speak, and an association of non-related, but negative images and themes. Of course, there is no hard evidence.

It opens with the voice of US President George W. Bush,

“My fellow citizens, Americans have known surprise attacks, but never before on thousands of citizens… We are a country awakened to danger, and called to defend freedom.”

Laid on top of the audio are images from 9-11, and footage from fighting in the middle east, as if attempting to make the subconscious connection from the first moment that somehow Venezuela is supporting terrorists, or perhaps had something to do with the 9-11 attacks.

The screen zooms in on a map of Venezuela.

“Hugo Chavez is an enemy of Freedom that threatens the balance of power in the hemisphere… Hugo Chavez is a threat, we must take him seriously and we must act now…”

Representative Lincoln Diaz-Balart, speaking one of the first blatant lies,

“Chavez is a dictator and thus not a legitimate leader.”

The movie continues with suspenseful music, and footage of police, violence, and demonstrations from the 2002 coup d’état, that make it appear as though Venezuela is living in a state of repression and protest. The documentary makes tragically unsubstantiated claims on how “unemployment and poverty have increased” under Chavez; how Venezuela is a “Cuban colony”; how Chavez wants to “attack the United States”; how Chavez is a “a member of the axis-of-evil… that wants to bring [the US] to our knees”; how he is a “terrorist collaborator,” a “subnormal psychopath”; how Chavez is ‘collaborating with the enemy- radical Islam”; how he is “motivated by envy and resentment”, is racist and machista, “anti-Semitic”, and “anti-Jew.”

To make the terrorist link, the movie goes so far as to claim that Venezuela has issued passports for 300 radical Islamist terrorists and that Hezbollah is operating a division out of Venezuela.

To make the drug connection, it claims that he is building his own “paramilitary” group; providing support to the Colombian guerrilla, FARC; and a random reference that he may “wind up being the largest drug kingpin in Latin America.”

It follows the connections to Russia, and points to a massive military buildup, which is completely unsubstantiated considering that even under the most extreme estimates, Venezuela’s 2007 defense budget is less than 1% of that of the Pentagon.[11]

It claims China wants to “substitute the United States as the primary power in the western hemisphere,” and calls Venezuela’s relationship to the Asian country, “extremely dangerous.”

In an attempt to de-legitimize Chavez’s presidency, it goes so far as to resurrect a completely discredited claim that Chavez stole the Venezuelan 2004 Recall Referendum- a point that even most members of the Venezuelan opposition no longer believe. The movie claims that in the lead-up to the Referendum, “all the exit polls, [were] unanimously 59-60% anti-Chavez.” The claim is an outright and proven lie. The only poll that showed Chavez behind in the 2004 election was the one conducted by the US-based, Penn, Schoen and Berland, which was being carried out on behalf of the opposition organization, Sumate.[12]

During a ghastly lament for the loss of a potential US invasion opportunity, the movie even gets in a jab at Former US President Jimmy Carter, whose Carter Center, along with the OAS certified the 2004 Referendum as legitimate,

“For the Carter Center to certify the phony elections that Chavez used to keep himself in power… that completely undermined any effort we could have made at a time to try and restore a real democratic system in Venezuela, and we didn’t stand by the Venezuelan opposition. We have to stop letting the Jimmy Carters of the world dictate the agendas of the United States in the Western Hemisphere.”

The documentary then calls the US to action:

“It is very important that the US act now… instead of waiting until he is able to build up either forces or friends.”

“Whether or not we remove his presence politically, or isolate him, remains to be seen, but if he continues to grow as a threat… then at some point we have to take real action to stop him. Is that military action? I hope not, but if that’s what it takes to do it, then I think ultimately that’s what we’re going to have to do.”

The video ends with a quote from Connie Mack which, as if out of a PR textbook perfectly frames the last words of debate for the United States,

Since its support of McCarthyism in the 1950s, the organization, which has close ties to the US military industrial complex, the Republican party, and US intelligence personnel, has spent millions of dollars and produced countless videos and books attempting to promote its vision of the communist threat and the need for increased US military expenditure. In 1980, ASC produced the similarly named “Attack on the Americas!” in which it called for a stronger stance against the spread of communism in the Hemisphere.[13]

According to a 1981 NACLA review, which called the documentary “biased and distorted,”

“‘Attack on the Americas’ argues for U.S. support to unpopular military dictatorships in El Salvador, Guatemala, and elsewhere in the Americas. It claims, despite widespread findings to the contrary by international organizations, church groups, and the U.S. government, that these governments have not violated human rights. The film concludes with a plea for increased military strength in order to protect the United States’ geopolitical and economic interests in Central America and the Caribbean.”

In the same NACLA article, Phillip Wheaton, then director of the Ecumenical Program on Central America and the Caribbean (EPICA) points out:

“The film has a double message or argument … [first] a rhetorical, redbaiting warning against the steadily growing and intentional strategy of the Soviet Union to take over the Caribbean basin and to march inexorably northward through Central America, country by country, until they are at our border. Thus the Americas are ‘under siege’ and through Cuban intervention, the Soviets intend to ‘slash’ the Americas in half. The second message is an attack on the Carter administration’s human rights philosophy as naive.”[14]

With a little rearranging, the substitution of Venezuela for the Soviet Union, and the focus on South rather than Central America, nearly the same quote could be said about ACSF’s latest film, “Crisis in the Americas,” even down to the attack on Jimmy Carter. Once again, unsubstantiated claims are refurbished with the goal of persuading public opinion.

History often repeats itself and ACSF and Reich know the propaganda playbook by heart. The question is if the American people will take steps to call them on it, or if they will continue to be duped by their PR spin and “manufactured consent” that not only brought us Central America in the 1980s, but the war in Iraq, Afghanistan, potentially now, Iran, and perhaps one day, Venezuela.