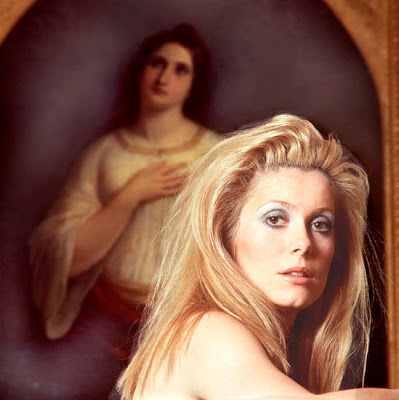 The actor father of Catherine Deneuve was a Nazi collaborator, according to a new unauthorised biography of the French actress.

Bernard Violet, a investigative writer, says in his book, that Maurice Dorléac, made 72 pro-Nazi radio appearances on the anti-Semitic Radio-Paris during the German occupation.

He also claims that Dorléac featured in several propaganda films, including one that praised the Milice, the political police of the Vichy regime.

Violet said that he found the damning evidence after spending months trawling through the French national archives.

Dorléac was found guilty after the war of "giving aid to Germany... and damaging the unity of the French nation". He was banned from working as an actor for six months. He died in 1979.

Deneuve, 63, who was born in Nazi-occupied Paris in 1943, lobbied to prevent publication of the book, which went on sale in France this week.

The actress, who has often been described as the most beautiful woman in the world, is usually seen in her home country as a warm, if rather disorganised person, beneath an icy, controlled exterior.

But Violet claims that this image is a "legend" constructed by the actress herself.

"Catherine Deneuve, the woman, I find very disappointing. She is not an especially happy person, rather a sad one," he says.

The father of iconic French film star Catherine Deneuve was a low-level Nazi collaborator during World War II, according to a new, unauthorised biography.

Deneuve, who is 64 next week, emerges from the biography, which she tried to block, as a calculating and unhappy person, driven by money and an obsessive need for privacy.

The actress, who has been described on numerous occasions as the most beautiful woman in the world, is usually presented in France as a warm and rather scatty person, beneath an icy, controlled exterior.

But the author, Bernard Violet, a respected investigative biographer, claims that this image is a "legend" constructed by Deneuve herself.

Recent revelations that Deneuve had made public appearances for cash for a dubious Algerian businessman were not an isolated case, according to the book, Deneuve, L'Affranchie (Deneuve, the free woman). However, the book's main revelation is on Deneuve's father, Maurice Dorleac, who was also an actor.

During the war, according to records discovered by Violet, Dorleac made 72 appearances in radio plays for the pro-Nazi and virulently anti-Semitic radio station Radio-Paris.

He also appeared in propaganda films, including one which sang the praises of the Milice, the political police of the collaborationist Vichy regime. Dorleac was found guilty after the war of "giving aid to Germany ... and damaging the unity of the French nation". He was banned from working as an actor for six months.

The revelation is embarrassing to Deneuve, who has supported many left-wing and humanitarian causes. Violet says that this skeleton in the family cupboard may explain the "tangle of anguish" at the heart of Deneuve's secretive personality.

The book reviews her many love affairs and her only formal marriage, to celebrated British photographer David Bailey in the 1960s. After a whirlwind romance, the book says, the couple found little to say to each other because Bailey never learned French and Deneuve was usually "too tired" to speak English.

The book suggests that Deneuve is not the scatty, impractical, money-detesting person sometimes presented in the French media. In 2005, she was forced to admit, after initial denials, that she had received large cash payments to attend private parties, and a football match, with Rafik Khalifa, an Algerian businessman who had a meteoric rise before being prosecuted for fraud.

Violet commented: "She has made some great films during a largely inconsistent career. Catherine Deneuve, the woman, I find very disappointing.

"She has spent her life insisting on her independence and her freedom and she has paid the price for it. I think that she is more respected than she is liked."