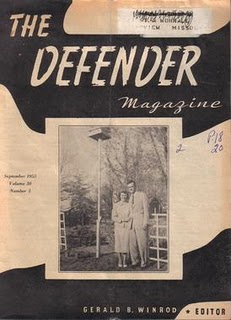 "History will give [Senator McCarthy] a rightful place above all inferiors." (February, page 2).

"[The American Medical Association] hopes to have a blitzkrieg going -- the objective being to exterminate all of the minority healing professions by 1958." (September, page 2)

Liberty weeps. In 1955, when the United States senate dared to censure its anti-communist inquisitionist Joe McCarthy, few Americans heard the spirited nonsense roared by Wichita evangelist Gerald B. Winrod in The Defender, his monthly journal of sermons and horseshit. Only Winrod dared call the censure "crucifixion." 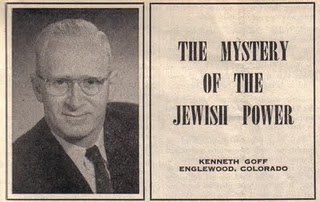 In The Defender, " ... Talk of serpents summoned by Jewish magicians in ancient Babylon leads right to Jewish 'tentacles' shaping American life: They control radio, TV, an 'invisible government,' and an ADL as powerful as the FBI. Groff detests the Talmud, that expansive archive of rabbinic thinking, almost as much as he adores repetitive synonyms. 'The contents of the Talmud explains why the Jews are strange, different, and odd' ... "

That means that some of Winrod's predictions turned out to be wrong, such as when he claims that McCarthy's speech in response to the censure "will be studied as a political and literary masterpiece in high school and college textbooks of the future," which just goes to show you that even time itself has a liberal bias. Hazarding why even Eisenhower turned red, Winrod speculates on powers greater even than presidents:

"It is now known that during all the months that the White House was maneuvering things against Senator McCarthy, the Time and Life publishing outfits had one of their key men stationed at the President's elbow."