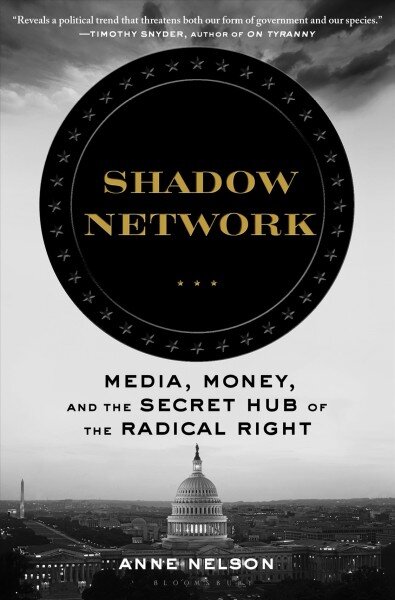 Shadow Network Media, Money, and the Secret Hub of the Radical Right

It's always election season in America, which means that even people who only casually keep up with politics are bound to know the names of some of the organizations that influence our democracy.

You don't have to be a political junkie to know the names of the NRA, Institute for Legislative Action, Planned Parenthood Action Fund, American Civil Liberties Union or the Club for Growth PAC.

But unless you breathe politics like it's oxygen, you're unlikely to have heard of a conservative organization called the Council for National Policy. The group isn't a political action committee; rather, it's a 501(c)(3) educational foundation that dates back to the first Reagan administration. And as Anne Nelson writes in her fascinating new book,Shadow Network, it's had an outsize effect on the modern American political landscape.

Nelson seeks to document the connections between "the manpower and media of the Christian right with the finances of Western plutocrats and the strategy of right-wing Republican political operatives." Many of these connections, she writes, were made possible through the CNP, whose members have included such familiar names as Trump aide Kellyanne Conway, former White House strategist Steve Bannon, the Christian Coallition's first executive director Ralph Reed and NRA CEO Wayne LaPierre.

Nelson traces the group from its founding in 1981 "by a small group of archconservatives who realized that the tides of history had turned against them" — specifically, activist Morton Blackwell, commentator Paul Weyrich and direct-mail pioneer Richard Viguerie. (Other founding members included Phyllis Schlafly andLeft Behindauthor Tim LaHaye.) The CNP's structure, Nelson writes, was similar to a group called the Council on Foreign Relations (of which Nelson herself is a member) — like that group, the CNP organized as a tax-exempt educational institution, although it was "designed to serve as the engine for a radical political agenda."

The CNP soon realized it could reach prospective voters through the media that many of its members owned. That included the radio broadcasting company Salem Media Group, co-founded by CNP members Stuart W. Epperson and Edward G. Atsinger; and would later include online publications like the Daily Caller. The programming of these various outlets, Nelson writes, "is not uniform, but it harmonizes."

Driving the success of the CNP was, Nelson claims, anxiety brought about by demographic changes. In the past century, more Americans have moved to cities, and fewer citizens are white and Protestant. "The mores of the new America created an unbearable tension," Nelson writes. "These demographic trends — and the anxiety they provoked — contributed to the forces that brought Trump to power."

But you can't convert anxiety into votes without cash, and Nelson does an excellent job following the money. She profiles some of the group's funders, both past and present, including businessman Foster Friess and controversial Texas oil heir T. Cullen Davis. Perhaps most prominent among the donors, though, are two families: the DeVos clan ("CNP royalty") and the Koch brothers, who donated widely to groups headed by CNP members.

Nelson follows the CNP through the 2016 election, in which most of its members, initially horrified by Trump, supported Ted Cruz and Marco Rubio. But their distaste for Trump was no match for their fear and hatred of Hillary Clinton. "[T]he Republicans fell into line as soon as Trump's nomination was confirmed, and the CNP media complex responded to a central command," Nelson writes.

Shadow Networkis bound to appeal to those whose interest in politics run deep, but it's not so inside baseball that lay readers will be stuck in the weeds. Nelson doesn't assume that her readers will be intimate with the ins and outs of how money influences politics, but she also never condescends to her audience — she does an admirable job providing context for the CNP and groups like it, and introducing readers to some of the lesser-known names with ties to the organization.

Nelson is not a neutral political observer, nor does she claim to be, which meansShadow Networkwill appeal much more to progressive and moderate readers than to conservative ones. She doesn't hide her animus for what she calls the "shrewd, remarkable and sometimes unscrupulous characters" who have made their mark on the American right, but she never descends into conspiracy theorizing — she makes her case soberly and with a historian's scrupulousness.

Shadow Networkis a fascinating book, and readers curious about how the American right gets its message out will find much to admire in it. It also serves as a grim warning for progressives who might already be counting their chickens before the 2020 election: "The CNP and its partners have spent over four decades studying their audience and mastering the written and unwritten rules of American politics," Nelson writes. "Its moralists have little regard for the rights of minorities; its financiers lack concern for social welfare; and its strategists have no respect for majority rule. If it is fully realized, their combination of theocracy and plutocracy could result in a dystopia for those who fall outside their circle."