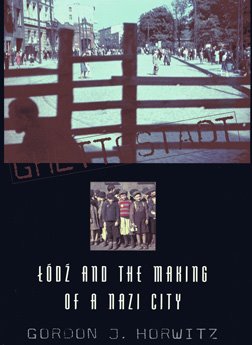 BLOOMINGTON, Ill.— Historians have explored the horrors of the Holocaust during World War II for decades, whether through the eyes of the Nazi officials, or through the memoirs of victims. Few, however, have looked at the dynamic interaction between the camps or ghettos created by the Germans, and the cities that surrounded them.

Gordon Horwitz, associate professor of history at Illinois Wesleyan University, examines the chilling evolution of the Holocaust as it came to Lodz, Poland, in his new book, Ghettostadt: Lodz and the Making of a Nazi City (Harvard University Press, 2008). “What interested me most was to explore the relationship between the ghetto and the city,” said Horwitz, who has been researching the book for more than a decade.

One of the first occupied cities to be annexed to the Third Reich, Lodz possessed the second-largest Jewish population in Poland with more than 200,000 Jews, constituting a third of the city’s residents. Horwitz said the Nazis set about remaking the city into a pristine and modern example of German ingenuity, and devoid of Jews.

“Today we would call the process ‘ethnic cleansing,’” said Horwitz of the Nazi goal to populate many cities in Eastern Europe with “pure” ethnic Germans. “This was a city that was undergoing radical demographic shift under the Nazis, who were colonizing Poland, and Lodz was to be a showcase of this colonization effort,” Horwitz said. “This is a rather large microcosm of what the Germans were doing in Eastern Europe during the occupation.”

In May of 1940, the Nazis established the Lodz ghetto, and herded more than 160,000 Jews into the overcrowded slum. Horwitz said it was only intended as a temporary solution to the “Jewish problem.” “The Nazis were not sure what they were going to do with the Jewish population, but the first step was seizing their assets and enclosing them in a guarded situation,” he said, noting the Nazis would not begin to carry out the so-called “final solution” of attempting to wipe out the entire Jewish population for years. “It was always in the air, but the Nazi had to go through a period of consideration of what was possible. They had to figure out themselves what they were going to do.” In the end, only a few thousand Jews survived the Nazi occupation of the city.

In the book, Horwitz maneuvers back and forth between what was happening in the desperate circumstances of the ghetto and the elaborate refurbishing projects the Nazis were conducting in the city. “What this book does is link those two worlds,” said Horwitz, who delved into newly available resources, released only after Poland became independent in the 1990s. “New documentation, new visual evidence from that time period opened up possibilities,” he said.

Horwitz traveled to Poland and Germany, pulling from such resources as official Nazi reports, diaries of ghetto residents and Lodz newspapers. “I looked beyond the war news on page one and into the local sections, which dealt with events and the remodeling efforts to make the city a gleaming cultural jewel,” he said. While reading stories, from interviews with premiere architects to reviews of plays being performed in the local theatres, Horwitz discovered the ghetto was not easily ignored. “My hunch was right. Their prospective vision, all be it filtered through the Nazi lens, reveals a great deal about the mentality of the new city fathers and the Nazi design,” said Horwitz. “You find – not unexpectedly – that they cannot help but make reference to the ghetto, to all that the Jews had supposedly done to harm the city.”

Ghettostadt is Horwitz’s second book on the Holocaust. His first, In the Shadow of Death: Living Outside the Gates of Mauthausen, was published in 1990 (The Free Press) and focused on the relationship between the Austrian town and the death camp. Horwitz said he is drawn by the striking dichotomy of the isolation and desolation of the camps and ghettos, and the thriving life outside them. “We must examine a civilizational problem that arises when looking at the Nazis,” said Horwitz. “In some ways, I think we are still puzzling over the problematic relationship between the idea that ‘life goes on,’ while simultaneously life is in danger, or more than in danger, being destroyed.”

In Lodz, that dichotomy is reflected in the building of a Nazi city, while destroying hundreds of thousands of lives. “They were able to continue with their work – which was of course the work of annihilation – while at the same time enjoying the fruits of culture and civilization. I’m curious about this,” said Horwitz. At the same time, he analyzes the inner workings of the ghetto, and how Jewish leaders dealt with the Nazis, especially the controversial Chaim Rumkowski. “Did he do what he thought was best to keep Jews in the Lodz ghetto alive?” Yes he did. Was he a hero? No, he was not,” said Horwitz, recalling the infamous speech where Rumkowski pleaded with parents to turn their children over to the Nazis or face them wiping out of the entire ghetto.

Horwitz admits researching the horrors of the Holocaust can take a toll. “It can be draining at times, but I think it’s important work to do. Perhaps you can call it a calling, or a mission, and that sustains me. I believe in what all historians do. In part, we are mediating the memory of another generation.”

The new book, Ghettostadt: Lodz and the Making of a Nazi City, was published in June to critical acclaim, and is available now.