Blagojevich was a Bookie with Mafia Connections, According to Former Lawyer and FBI Agent 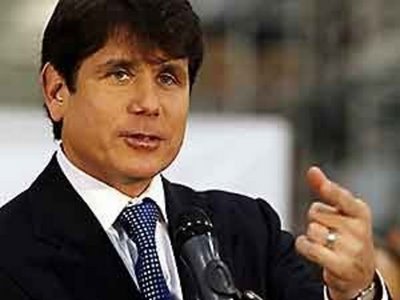 ILLINOIS Governor Rod Blagojevich was a mob-connected bookie in Chicago before he went into politics, according to former lawyer Robert Cooley, who worked undercover for the FBI in the 1980s and helped convict 24 crooked police, judges and politicians.

Mr Cooley, who spent years in a witness protection program, said he observed Mr Blagojevich running a sports gambling operation in Chicago and reported it to his FBI controllers. In an online interview reported by Chicago's ABC7 news, Mr Cooley said Mr Blagojevich was paying "street tax" to Robert "Bobby the Boxer" Abbinanti, an enforcer and gambling collector for West Side mob boss Marco D'Amico, a leading Chicago underworld figure. Abbinanti was involved in illegal gambling with Daniel Stefanski, a boyhood friend of Mr Blagojevich, who landed a job with a six-figure salary in the Illinois Department of Transportation in 2003, courtesy of the Governor.

Mr Cooley, the author of When Corruption Was King: How I Helped the Mob Rule Chicago, Then Brought the Outfit Down, said the potential for corruption was clear when Mr Blagojevich went into politics.

"I predicted five years ago, when he ran (for governor) the first time, that he was a hands-on person who would be selling every position in the state of Illinois," Mr Cooley said. "That is exactly what happened." ...

He went for a jog in his neighbourhood yesterday as his lawyer, Ed Genson, branded the impeachment efforts an "Alice in Wonderland" process that prevented him from calling witnesses such as US Attorney Patrick Fitzgerald.

"Everybody's in a rush to judgment," Mr Genson said. "This is a real witch hunt."

The re-emergence of the controversial Mr Cooley will not help the issue go away.

The former Chicago policeman turned corrupt mob lawyer once paid $10,000 to a judge for the acquittal of hit man Harry Aleman, who murdered a Teamsters official in Chicago in 1977. The judge later committed suicide and in a controversial 1997 retrial, when Mr Cooley testified as a government witness, Aleman was sentenced to 100-300 years.

"The biggest problem you have now and the reason for what is happening is that the people in power have money and ability to silence the media so it will never be reported," he said. "As long as you have that going on, you will never stop it."

A spokesman said the Governor could not comment on Mr Cooley, the bookmaking claims or the mob payoffs.