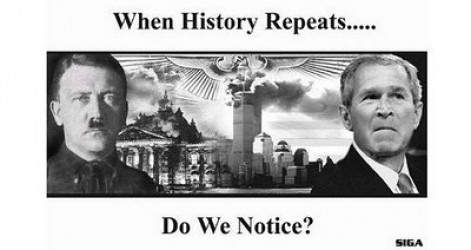 Congressional documents stemming from investigations of BOTH SIDES of GW Bush's family have been available to reporters for 50 years, but the military-industrial press, of course, has suppressed the information. The Guardian let itself off the hook: "RUMOURS of a link between the US first family and the Nazi war machine have circulated for decades ... " Rumours? Idle gossip? Books brimming with exhaustive research support revealing Prescott Bush's financial ties to Nazi Germany were published in the '40s and onward. A "rumour" is any politically-sensitive information the Guardian chooses to suppress, but half a century too late ...

" ... Now the Guardian can reveal how repercussions of events that culminated in action under the Trading with the Enemy Act are still being felt by today’s president ... "

That's the corporate press ... status quo editorial opinion called for the suppression of information - ah, "rumours" - on the deplorable conditions at the VA for a couple of years before deciding to let the world in on it.

And this story arrived decades too late. The Guardian should be lambasted, grilled in a public court, not feted, for taking its precious time to reveal the Nazi connections to the fascist Bush clan. - AC

Ben Aris in Berlin and Duncan Campbell in Washington

George Bush’s grandfather, the late US senator Prescott Bush, was a director and shareholder of companies that profited from their involvement with the financial backers of Nazi Germany.The Guardian has obtained confirmation from newly discovered files in the US National Archives that a firm of which Prescott Bush was a director was involved with the financial architects of Nazism.

His business dealings, which continued until his company’s assets were seized in 1942 under the Trading with the Enemy Act, has led more than 60 years later to a civil action for damages being brought in Germany against the Bush family by two former slave labourers at Auschwitz and to a hum of pre-election controversy.

The evidence has also prompted one former US Nazi war crimes prosecutor to argue that the late senator’s action should have been grounds for prosecution for giving aid and comfort to the enemy.The debate over Prescott Bush’s behaviour has been bubbling under the surface for some time. There has been a steady internet chatter about the “Bush/Nazi” connection, much of it inaccurate and unfair. But the new documents, many of which were only declassified last year, show that even after America had entered the war and when there was already significant information about the Nazis’ plans and policies, he worked for and profited from companies closely involved with the very German businesses that financed Hitler’s rise to power. It has also been suggested that the money he made from these dealings helped to establish the Bush family fortune and set up its political dynasty.

Remarkably, little of Bush’s dealings with Germany has received public scrutiny, partly because of the secret status of the documentation involving him. But now the multibillion dollar legal action for damages by two Holocaust survivors against the Bush family, and the imminent publication of three books on the subject are threatening to make Prescott Bush’s business history an uncomfortable issue for his grandson, George W, as he seeks re-election.

Letter to the Editor: 'The Real Hitler Comparisons’

The Bush Dynasty and the bin Ladens