Also see: "Death camp memorial website hacked," The Local.de: "The interior ministry said it was not ruling out the possibility that the site was hacked by someone with a right-wing extremist background. In recent months Austria has seen a series of cyber attacks from extreme right-wing groups - usually directed at political opponents. Hackers flood the sites with so many requests that the website’s servers crash. ..."

Hackers have put child abuse images on the memorial website of the Mauthausen concentration camp in Austria, 70 years after the Nazis' WW2 defeat.

The website was quickly deactivated by the company managing it, a message on it reads. The Austrian interior ministry is investigating the attack.

The camp - one of the most notorious and biggest in the Third Reich - was liberated by US troops in May 1945. On Sunday there will be commemorations of the liberation at Mauthausen. 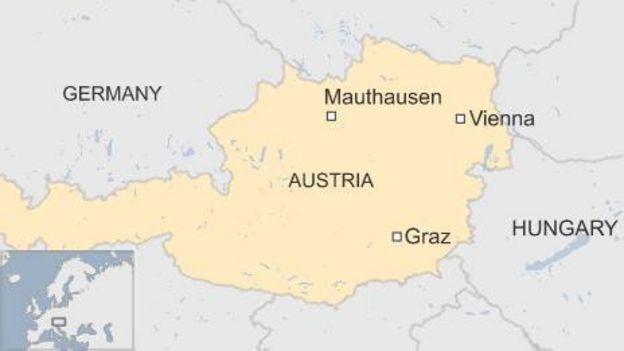 The exact death toll is not known. Inmates, many of them Jews, were starved, tortured or gassed to death. Others died of exhaustion through hard labour.

Many Soviet prisoners-of-war and Spanish Republicans were also among the victims. Many sub-camps were also set up near the main camp.

Austrian officials suspect that far-right extremists may have carried out the attack, as such extremists have hacked several websites in recent months, Austria's Der Standard news website reports.

The head of Austria's Mauthausen Committee - a group promoting human rights and democracy - condemned the hack.

Willi Mernyi said it was "obnoxious and reveals the mindset of the hackers".

google “concentration camps pentagram geography” and look at the images.