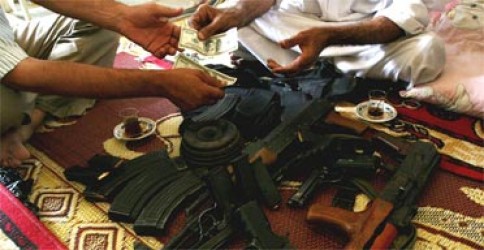 US loss of control over the flood of weapons into Iraq was highlighted again yesterday when it emerged that Italian anti-Mafia investigators had uncovered an alleged shipment of 105,000 rifles of which the American high command was unaware.

The Italian team, in an investigation codenamed Operation Parabellum, stopped the £20m sale and have made four arrests.

The consignment appears to have been ordered by the Iraqi interior ministry. The US high command in Baghdad admitted that it had no knowledge of any such order, even though the ministry is supposed to inform the Americans before making any arms purchases.

Lieutenant-Colonel Daniel Williams, of the Multi-National Security Transition Command-Iraq, which is responsible for training the Iraqi security army and policy, said: “Iraqi officials did not make MNSTC-I aware that they were making purchases.”

An Iraqi interior ministry official insisted the weapons were mostly for Iraqi police in Anbar province. But, given the close relationship between the Shia-led government and Shia militias and the irregular nature of the arms order, the disclosure prompted suspicion that the eventual destination could have been the militias, or police units close to them.

The aborted shipment comes only a week after a congressional investigation team found that the Pentagon could not account for 190,000 US-supplied weapons that had gone missing in Iraq since the 2003 invasion. It would have been another spectacular lapse to add to a growing list that began immediately after the invasion when the US failed to protect Iraqi army weapons dumps from looting and disbanded the Iraqi army complete with weapons.

The anti-Mafia investigators stumbled on the deal, which had not been authorised by the Italian government, while shadowing a group of suspected Italian drug traffickers. Expecting to find drugs during a covert search of the luggage of a suspect boarding a flight to Libya early last year, police instead found helmets, bullet-proof vests and a weapons catalogue.

Subsequent telephone and email interceptions led investigators to a group of Italian businessmen, including Massimo Bettinotti, 39, who were arrested and face arms trafficking indictments in relation to Libya and Iraq. In November, an Iraqi-owned company emailed Mr Bettinotti, the owner of the Malta-based MIR Ltd, requesting 100,000 AK-47 assault rifles and 10,000 machine guns for the Iraqi interior ministry, stating that “this deal is approved by America and Iraq”. The Iraqi company denies any wrongdoing.

By December, the Italians had allegedly found a Bulgarian supplier for 50,000 AKM rifles, an improved version of the AK-47 and 50,000 AKMS rifles, the same rifle with folding stock, as well as 5,000 PKM machine guns. Before the weapons were supplied, police made arrests across Italy on February 12, including Mr Bettinotti, Gianluca Squarzolo, 39, the man whose luggage had allegedly yielded the original clue, Ermete Moretti, 55, and Serafino Rossi, 64. Details of the deal were uncovered by Associated Press reporters who saw the emails and court documents.

The Iraqi interior ministry refused to discuss the case publicly but a ministry official, speaking off the record, confirmed that the ministry had sought the weapons. Asked about the irregular channels used, he said the ministry “doesn’t ask the supplier how these weapons are obtained”.

In a separate development, the costs of the US operation are continuing to soar. The Washington Post reported yesterday that the US military had paid $548m (£274m) to two British security firms to protect the US Army Corps of Engineers, mainly civilians carrying out reconstruction work, more than $200m over the original budget.

The two companies, Aegis Defence Services and Erinys Iraq, signed their contracts in 2004. In July, the security force in Iraq had grown to 2,000 employees.

The deal was attributed by the Pentagon to the growth in the insurgency. The Pentagon estimates that there are 20,000 private security contractors in Iraq. Colonel Douglas Gorgoni, senior finance officer for the Corps of Engineers in Iraq, said: “To pay a man or a woman to come over here, put the vest on every day and escort military and civilians around the theatre, knowing that people want to blow them up and kill them, you gotta pay to get that level of dedication.”

The number of illegal weapons in Iraq is unknown but the country has been awash with them since at least 2003. The then highest-ranking US official in Iraq, Paul Bremer, disbanded the Iraqi army, sending thousands of men away with weapons. That decision, which led to many of them joining the insurgency, was compounded by a failure of US troops to protect Iraqi arms dumps, which were looted. Weapons have also been smuggled over the border. The US and Britain claim Iran has been supplying weapons, including sophisticated roadside bombs, though Tehran has complained about the destabilising impact that all the weapons are having on its country.