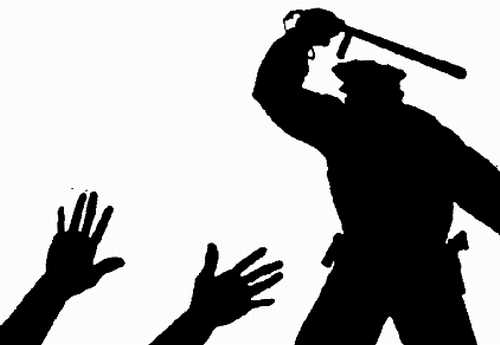 Those lawsuits, filed respectively by a state legislator and a high-profile media commentator (both of whom are black) didn’t surprise Valrey. His travels across America screening his film highlighted for him – again – a reality that governmental officials constantly reject: police brutality is a widespread scourge.

“Police brutality is definitely not ‘isolated incidents’ as officials always say after each new killing or beating by police,” said Valrey, host of the Block Report, a program aired on KPFA-FM, the Pacifica station in the Bay Area.

“When we screened the film in Atlanta people were still talking about the police murder of 92-year-old Kathryn Johnston [in 2006].”

That deadly New Years Day incident, which was captured on cell phone videos by eyewitnesses, triggered condemnations across America.

In an unusual twist for police abuse incidents, a jury last summer convicted Johannes Mehserle, the BART police officer who shot the handcuffed Grant in the back, of involuntary manslaughter. (Police officers involved in abuse incidents rarely face criminal charges, and most escape even discipline from their police department.)

Decades of incidents across the country and repeated documentation from a variety of sources substantiates Valrey’s assessment of the systemic nature of police brutality.

Thirty-two years before that Philadelphia state legislator filed his federal civil rights violation lawsuit alleging two policemen roughed him up when he inquired about their mistreatment of an elderly man, a Pennsylvania House panel conducted an investigation into widespread often deadly brutality by Philadelphia police dating from the 1960s.

During those August 1978 investigative hearings a respected black pastor called police “raving maniacs” when telling that legislative panel about his beating by Philly police when he asked them to stop beating a teen on his doorstep.

Data in the 2010 semi-annual report released by the National Police Misconduct Statistics and Reporting Project listed 2,541 cases of various kinds of police misconduct nationwide between January and June of this year. Abuse from “Physical Force” constituted the largest category of those misconduct reports.

Further, according to the NPMSRP’s report, police misconduct caused 124 deaths in the first six months of 2010, with 60-percent of those fatalities resulting from police gunfire.

The “Operation Small Axe” film also features a segment about the prosecution of Valrey, who, during an unruly protest days after the Grant shooting, was arrested by Oakland police and charged with felony arson.

Valrey says his arrest was a blatant attempt to punish him for his coverage and his criticisms of police brutality, racism and other contentious issues in Oakland. Valrey, who faced 3-to-5-years in prison if convicted, spent two days in jail after his arrest and then 14-months on bail before prosecutors dropped the arson charge on the first day of his trial citing lack of evidence.

Oakland police had arrested Valrey minutes after he verbally confronted Oakland Mayor Ron Dellums, a former U.S. Congressman known as a progressive Democrat. Valrey had blasted Dellums for doing too little about the Grant shooting specifically and about police abuse generally.

“After criticizing Dellums I was standing across from City Hall reviewing the video in my camera when I saw police running towards me so I ran, and they tackled me, took me to jail and took my camera,” Valrey said.

“Police made up the charges at the police station. They said I started a fire in a trash can outside of the federal building. Why would I start a fire outside one of the most secure buildings in Oakland where everything is videoed?” Valrey said.

“At the preliminary hearing the cop that testified against me said he did not see me start the fire but he saw some smoke coming from the can. He said he was 100-yards away and it was at night.”

Valrey says police refused his requests to return his video camera and even ignored a court order he obtained. “I never got it back,” he says.

While many Bay Area journalists criticized the arrest of Valrey, some defended it.

The headline for a cover story in the East Bay Express called Valrey an “Agent Provocateur” – a term generally associated with police informants assigned to cause violence. That article referred to Valrey as an “advocacy journalist” who did things “no mainstream journalist would do,” like speaking at an anti-police brutality rally.

“They tried to get the community to turn against me but I have strong support in the community,” said Valrey, who serves an editor at the San Francisco Bay View, a black owned online newspaper.

Police abuse incidents have cost Oakland millions of dollars in lawsuit settlements in the past decade alone. Settlements include the $1.25-million paid in 2006 to settle 59 lawsuits arising from police beating anti-war protestors three years earlier and the $10.9-million paid in 2003 to settle a class action lawsuit against four officers who beat and/or falsely arrested 119 people.

A $3.5-million 2006 settlement symbolized what Valrey and others contend is the Oakland police practice of shooting first and asking questions later.

That settlement involved Oakland paying the family of an undercover policeman who was fatally shot in January 2001 by two fellow (white) officers who claimed they mistook the (non-white) undercover officer for an armed assailant. The slain officer was arresting a theft suspect. Police officials described that incident as a tragic accident dismissing racial profiling allegations by critics.

Earlier this year BART officials agreed to pay $1.5-million to the 5-year-old daughter of Oscar Grant.
That NPMSRP data listed $148.5-million paid by governments across America for police “misconduct-related” settlements and judgments during the first six months of 2010.

“Operation Small Axe” provides a unique focus on the ire raging within Oakland’s minority communities arising from decades of rampant police abuse. The film depicts street-level anger among everyone from teens to the elderly – an anger triggered by daily indignities from police like profanity-filled commands and unnecessary force that are ignored by the news media.

“People in the communities know this police terrorism is happening but it is different for them to see it on the screen. It’s important to have our media show what is going on because the news media doesn’t do that,” said Valrey, a harsh critic of mainstream media. “I think it’s important for people to see a media person from ‘the Hood’ fighting back.”

Valrey sees police brutality as a “unifier” for black and brown communities across the country.
“These groups usually don’t agree on religion or politics but they agree that police terrorism is an unnecessary evil in our communities,” Valrey said. “When we showed the film in San Diego, the audience was all Mexican. Blacks and Mexicans don’t get along but there were no problems.”

The “Small Axe” film began as a documentary on Valrey’s Block Report program, but evolved into an examination of police brutality in the wake of the Oscar Grant shooting. Valrey says making the film was “eye-opening…like Ida B. Wells reporting on lynchings in the late 1800s.” The title for the movie comes from a song by reggae music legend Bob Marley.