Put on your fear caps. The Gestapo have suffered a number of setbacks in the war against "Islamofascism." And the decimation of civil liberties hasn't deterred them one iota. Illicit wire-taps? How many "Islamofascists" have been arrested as a result of Governor Bush's taps? The "Islamofascists" are too SMART for that. Concentration camps? They haven't stopped the cunning "Islamofascist," either. Medieval water torture doesn't deter them. They will keep coming, I assure you! The infliction of extreme pain and sexual humiliation have no effect on goose-stepping, satanic "Islamoterrorists," or even witnessing the rape of their own children by crew-cutted pedophiles in uniform - what does it take? What's needed, I think, is the extraction of gold from their teeth to finance this "war" and take the burden off the American tax-payer, also gas chambers to process the "terrorists" quickly and efficiently to their inevitable ends. Secret trials are costly (and leave a paper trail). Dispatching the "Islamofascists" will rid the earth of these freedom-hating subhumans, a bridge to the darker races, then we can turn to "terrorists" in other parts of the world who are contaminating our superior Pan-European bloodstock ... - AC 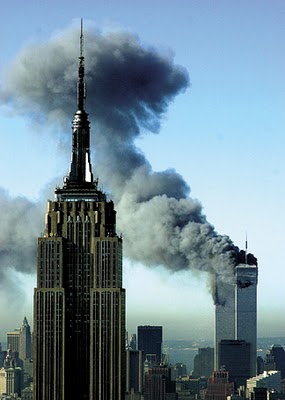 The brother of a pilot wrongly accused of training the 11 September 2001 hijackers has succeeded in a High Court bid to win damages for wrongful arrest.

Mohamed Raissi, whose brother Lotfi was the first person accused of taking part in the attacks in New York and Washington, secured victory after claiming he was falsely imprisoned and unlawfully arrested days after the attacks.

Mr Justice McCombe ruled in favour of Mohamed Raissi yesterday, announcing that "there will be judgment in his favour for damages to be assessed".

But a similar claim by his brother's wife, Sonia, was rejected. Mrs Raissi and Mohamed Raissi were each seeking damages in excess of £150,000 in the action.

Lotfi Raissi was arrested 10 days after 11 September following an extradition request from the United States. He and his wife were living in Colnbrook, Berkshire, at the time. He was released in February 2002 and a judge ruled that there was "no evidence" that he was connected to the 11 September attacks or any form of terrorism. His wife and brother were also arrested. Mrs Raissi, a French-born dancer who was working as an Air France customer service agent at Heathrow Airport, was released without charge after five days.

Mohamed Raissi, now 35, was arrested at his home in Hounslow and held for about 42 hours before also being released without charge. The Metropolitan Police denied liability and were granted permission to appeal.

In February, Lotfi Raissi lost his High Court battle for compensation after judges said it did not qualify for an award despite being held for nearly five months at Belmarsh Prison.

Yesterday Mr Justice McCombe said the only issue in each case "is as to the reasonableness or otherwise" of the grounds on which each of the arresting officers acted. He said the question to be answered was: "Assuming the officer had the necessary suspicion was there reasonable cause for suspicion?"

In the case of Mrs Raissi, he ruled that the factors that the arresting officer had in mind "amply justified the arrest". He said: "She had been with him in a foreign country at a time when he might well have been thought to have been engaged, at the same time and at the same location, in the very training which was being undergone by one of the known perpetrators of the atrocities."

Mr Justice McCombe ruled that Mohamed Raissi's case was "quite different" although he said he had "not the slightest doubt" that the officer acted in "a professional manner". He said: "He was simply thought to be the close brother of a major suspect and the two lived geographically fairly close to each other; each had access to the home of the other in this country." The judge ruled: "In my judgment those grounds were not sufficient to justify the arrest."