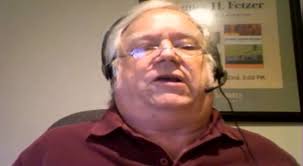 Conspiracy theorist Jim Fetzer recently moved from somebody who believes “the Holocaust is a reality” to an outright Holocaust denier who considers the extermination of the Jews “a big lie” with only about “600,000 who died (gypsis and Jews, mentally and physically handicapped people)”.

In his radio interview with Kevin Barret, Fetzer offered three arguments as to why he decided to join Holocaust denial, but none of which is actually justifying reasonable doubts on the systematicextermination of the Jews by National Socialist Germany (each is discussed below).

Predictable, the reception of Fetzer’s acceptance of a substantial part of the Revisionisthypothesis was mainly positive at the CODOH Revisionist Forum –  unlike his previous appearance where he was not in full denial mode yet – and is even celebrated as “tectonic shift in the views of progressive intelligentsia”.

The term “progressive intelligentsia” as used by Nick Kollerstrom aka astro3 is obviously meant to describe somebody who believes per default only in the most bizarre and extreme variants of conspiracy theories featuring Israel and the USA. It is arguable whether such kind of support will actually help the Revisionist case.

“If you pay attention to the International Committee of the Red Cross in its own records which are very detailed and specific, the number actually might be 10% of that might be 600,000 who died gypsies and Jews, mentally and physically handicapped people, but nowhere near 6 Million.(Minute 9:12)

Unfortunately, Fetzer did not cite any source or publication for the claim. However, in the comments section of the blog posting at veteranstoday.com Fetzer provided a link to an article“reporting the records of the International Committee of the Red Cross”.

The posting shows scans of two documents, the more detailed and later document is dated 16 January 1984. The documents were issued by the special registrar’s office in Arolsen in Germany, largely relying on information from the International Tracing Service (ITS) in Arolsen.

The entire flawed argument had been already briefly tackled several years ago on this blog, but since it continued to creep into obscure sites and now infected Fetzer, it is worth to elaborate on the misconception again.

The figures provided in the documents are NOT total numbers of Holocaust victims, but “certified cases of deaths of prisoners in former German concentration camp at the special registrar’s office Arolsen”. Accordingly, the figures include only a very limited range of victims, namely those who died during imprisonment in German concentration camps (including criminal and political prisoners) AND whose death was documented by the camp administrations AND whose records survived the war (AND whose relatives asked for a death certificate at the German authorities, according to the testimony of the director of the ITS Charles Biedermann at the 1988 Zündel trial).

It is immediately clear that per its definition the figure can cover only a fraction of the Holocaust victims and that it does not consider most of the Jewish people killed by German military and paramilitary forces, since these died outside the concentration camps’ administration or without death records issued by the camp authorities such as those killed by mass shoting and gassing in the East, Jewish people killed in the extermination camps Belzec, Treblinka, Sobibor, Chelmno and murdered at killing sites in concentration camps without being detained there previously or Jewish people who died in ghettos and on transport.

So Fetzer is basing his assertion of 600,000 victims on a document that makes it very clear itself that it cannot serve as a basis for any estimation not even for the number of total victims in concentration camps (not to speak of the numerous victims outside the concentration camps).

“Robert Faurisson’s explanation in his article against Revisionism Hollyoodwism where he talks about how the film footage was contracted to resemble only the most you known seemingly damning evidence and the fact that it was actually Allied bombing that causes starvation of most of the occupants of the concentration camp […] This article by Robert Faurisson on Revisionism and Hollywoodism is absolutely brilliant, that is a mind blower in my opinion.” (Minute 10:35 and 68:00)

In this article Fetzer considers to be “absolutely brilliant” and a “mind blower”, Faurisson writes that “the horrors discovered there [in Bergen-Belsen] were not created by the Germans. They were due to the war and, in particular, an air war conducted mercilessly, to the end, by the Allies against civilians…the ones mainly responsible were the US Air Force and the Royal Air Force”.

The statement as such is certainly appealing to any conspiracy theorist suspecting Anglo-American activity behind any evil in the world, but what entirely escaped Fetzer is the fact Faurisson did not provide a single reference and piece of evidence to support the claim. Anybody just claiming the exact opposite as response would not do so with any less justification.

So let’s do Fetzer’s homework and look a bit closer into the issue of the deaths in Bergen-Belsen concentration camp and the responsability. A report of the Bergen-Belsen commandant Kramer to the inspecteur of the concentration camps Glücks of 1 March 1945 already shows that the disastrous situation in Bergen-Belsen was largely the result of the severe “mismanagement” among the SS months before the end of the war, which is essentially confirmed by numerous contemporaray diary and post-war accounts (see for example Keller, Konzentrationslager Bergen-Belsen, 1995, p. 116 – 159), namely confining a large number of already weak and sick people into a camp entirely inadequate (constructively, logistically, organizationally) for this purpose.

Conversely, if the camp had been operated properly by the SS in the first place, the transport collapse at the end of the war (also caused by Allied bombings) would have led to some suffering among the people in the Bergen-Belsen camp but hardly to the mass dying that really occurred.

“…the research by Nick Kollerstrom, a historian from the UK, on the fact that there is an absence of the kinds of residue on the walls of the showers, where they were allegedly gassed, suggests they were not gassed at all.” (Minute 11:30)

Unless somebody is rigorously demonstrating that Prussian Blue had to form under the possibleoperation conditions of the gas chambers – and Revisionists have been unable to deliver this up to day – the absence of cyanide concentrations higher than 10 ppm on the construction material of the ruins does not suggest that no homicidal gassings were carried out in the light of theoverwhelming evidence for mass extermination by poison gas at these sites.

Previous Article
PolitiFact: “Yes, Donald Trump has been Linked to the Mob”
Next Article
Ruling: FBI Not Liable in Militia Case Involving Murder of Two