" ... The drug, codenamed D-IX, was tested at the Sachsenhausen concentration camp north of Berlin, where prisoners loaded with 45lb packs were reported to have marched 70 miles without rest. ... " 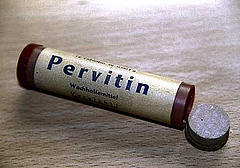 Even though Adolf Hitler's Nazi party rules stressed the importance of keeping fit by abstaining from drink and tobacco to keep the Aryan race strong and pure, it has emerged that his soldiers were taking addictive and damaging chemicals to fight longer and harder.

A study on the medicines used by the Third Reich revealed how Nazi doctors and officers issued recruits with pills to help them fight without rest. The German army's drug of choice, as it overran Poland, Holland, Belgium and France, was Pervitin, pills made from methamphetamine, commonly known today as crystal meth.

Hundreds of thousands soldiers were addicted to the pills by the time the invasion of the Soviet Union was launched in 1941, and records of the Wehrmacht, the German army, show that some 200 million Pervitin pills were doled out to the troops between 1939 and 1945.

Research by the German Doctors' Association also showed the Nazis developed a cocaine-based stimulant for its front-line fighters that was tested on concentration camp inmates. "It was Hitler's last secret weapon to win a war he had already lost long ago," the Daily Mail quoted criminologist Wolf Kemper, author of a German language book on the Third Reich's use of drugs called Nazis On Speed, as saying.

The drug, codenamed D-IX, was tested at the Sachsenhausen concentration camp north of Berlin, where prisoners loaded with 45lb packs were reported to have marched 70 miles without rest. The plan was to give all soldiers in the crumbling Reich the wonder drug - but the invasion of Normandy in June 1944, coupled with crippling Allied bombing, scotched the scheme.

"The Blitzkrieg was fuelled by speed. The idea was to turn ordinary soldiers, sailors and airmen into automatons capable of superhuman performance," a pharmacologist said.

Medical authorities say the downside of the plan was that many soldiers became helplessly addicted to drugs and were of no use in any theatre of war.

Otto Ranke, a military doctor and director of the Institute for General and Defence Physiology at Berlin's Academy of Military Medicine, was behind the Pervitin scheme.