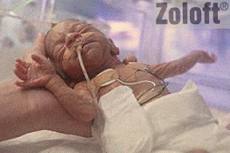 ” … The New England Journal of Medicine concluded in 2007, ‘Our findings … suggest that individual SSRIs may confer increased risks for some specific defects, but it should be recognized that the specific defects implicated are rare and the absolute risks are small.’ But the detailed findings from that same report show the incidence of heart defects in children is at a level double and even triple when compared to a control group of women who were not taking these medications. … “

Are doctors warning their patients early enough about the potential long-term harm to their baby from anti-depressants like Zoloft and Paxil? Birth defects caused by anti-depressants occur during the first trimester before a woman may even be aware she’s pregnant. So waiting to warn a patient until after she becomes pregnant is waiting too late to prevent the potential damage. Should a pharmaceutical company like Pfizer be held liable for these types of birth defects, if they didn’t go far enough in making sure doctors and their patients were aware of all the potential dangers?

(Newswire.net — March 19, 2013) New York, New York — According to pharmaceutical companies like Pfizer and GlaxoSmithKline, SSRIs are safe to ingest during pregnancy. And the New England Journal of Medicine concluded in 2007, “Our findings…suggest that individual SSRIs may confer increased risks for some specific defects, but it should be recognized that the specific defects implicated are rare and the absolute risks are small.”

But the detailed findings from that same report show the incidence of heart defects in children is at a level double and even triple when compared to a control group of women who were not taking these medications. And the FDA has issued warnings of serious risk from taking these drugs during pregnancy. How can the average consumer be expected to decipher these expert opinions when they seem to be in conflict regarding the risks of taking Zoloft during pregnancy?

So when should a doctor warn his or her patient about the risks of taking Zoloft? And is a pharmaceutical company like Pfizer liable for damages from birth defects when a patient doesn’t receive a full disclosure.

Zoloft was brought to market by Pfizer in 1991 as part of a new class of drugs called SSRIs (selective serotonin reuptake inhibitor). The primary medical use for these drugs is to treat major depressive disorder in adults and social anxiety in both adults and children. In 2011 Zoloft was the second most prescribed antidepressant in the US with doctors writing 37 million prescriptions for the medication. This high level of popularity was due to the fact that it was considered a breakthrough drug in 1991, because patients reported fewer side effects when compared to the older tri-cyclic antidepressants.

But these medications are linked to a higher risk for birth defects, including: cleft lip, skull defects, persistent pulmonary hypertension, cardiac problems that can be life threatening, and autism spectrum disorder.

Pfizer may have failed to provide adequate warnings about the potential risk of birth defects to either physicians or patients, so women who delivered babies with congenital defects may have legal recourse. The law states that pharmaceutical companies have a duty of care, and are therefore responsible for providing notice of all side effects and potential dangers from the use of their medications. So when they fail to proactively provide these warnings to doctors and patients, then the public has the right to hold them liable for damages that could have been prevented. As of December 2012 more than 250 lawsuits had already been filed by plaintiffs asking for damages regarding birth defects related to Zoloft. The first of these trials is currently scheduled to begin in September 2014.

In April 2012 a panel of judges determined that all legal claims for Zoloft birth defects filed in federal courts would be consolidated with one judge as a multi-district litigation. This judgment impacts almost 100 suits in 6 federal districts along with any new federal cases yet to be filed.

So should a woman take an anti-depressant during pregnancy when the hard number of adverse affects is only 15 out of every 10,000 births? There are a variety of individual factors that can impact the decision, so that’s a question for a woman to explore with her doctor. But a woman and her doctor may be able to find a safer alternative to an SSRI during her pregnancy.