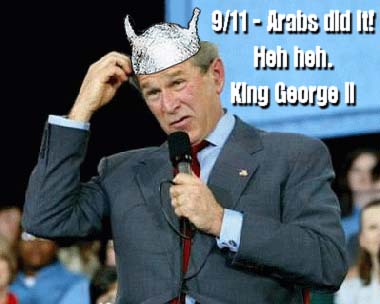 Browse any right-wing blog or listen to wingnut radio these days and you're confronted by a steady stream of angry voices denouncing "tin-foil hat" liberals and their "conspiracy theories."

The wingnuts are convinced that we liberal "conspiracy buffs" believe in some far-out things.

According to the wingnuts, we believe that Bush lied America into war. And we believe that the 2000 and 2004 elections weren't honest. And we suspect that maybe the White House puts the interests of Halliburton over the American people.

The only problem is that a majority of the American people have similar questions these days. Which I guess means that America has become a land of tin-foil hat wearers.

However, there's a rich irony with the wingnuts denouncing conspiracy theories. After all, these people wrote the book on conspiracies. You won't find a more paranoid group of people in the nation.

The fact is, wingnuts believe that just about everything is part of a conspiracy these days.

According to the wingnuts, even the U.S. Navy was part of a liberal conspiracy, when it awarded John Kerry military honors that he didn't really deserve. ...