Why Media Claims of “Satanic Panic” are Deceitful and Cover Up Real Atrocities: Satanism in the News

Satanism Or Occultism Suspected In Dozens Of Rabbit Slayings

Dortmund, Germany (AHN) – German authorities are searching for a killer in what is being called one of the worst cases of animal cruelty in the country’s history.

Since last year, more than 40 pet rabbits have been killed in the night in their outdoor hutches. Horrified owners found their beloved pets decapitated and drained of their blood in many cases. The killer takes the head and collects the blood, leading investigators to think that the animal killer is involved in the occult or Satanism. …

Can children thrive in the Church of Satan?

Jamie Meyer’s apartment is covered with signs of the sacred and profane. 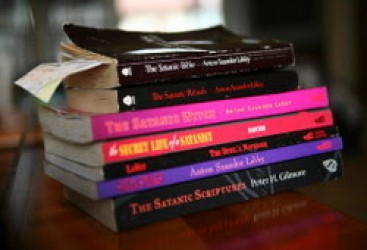 If you look closely at the picture to the left, you can see that the bookmark he uses to hold his place in The Satanic Bible is colored with crayon– a gift from his young daughter.

A stack of Satanic literature shares space on a shelf with paraphernalia from his favorite gory film and an Olan Mills-like photograph of Meyer and his three youngest daughters.

What might seem counterintuitive to some seems perfectly normal for the father of four. He says he is as equally devoted to raising successful children as he is to clarifying misconceptions about the Church of Satan.

Still, Meyer’s ex-wife is citing his religious affiliation as the main reason an Indiana judge should restrict his visitation time to allow his three youngest daughters to attend Christian church. … 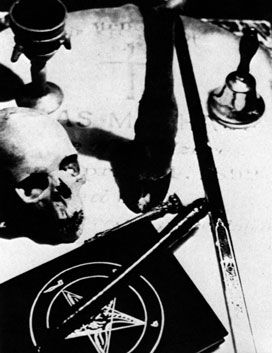 Durham Democrat accused as accessory. DA says charges for 2 others stem from ritual.

DURHAM –Prosecutors have charged three people, including two ranking members of the Durham County Democratic Party, as part of an investigation into allegations of rape and kidnapping that prosecutors said involved satanic worship.

The latest person charged is Diana Palmer, 44, the first vice chairwoman of the county Democratic Party. She turned herself in to police Wednesday afternoon and was charged with one count of accessory after the fact of assault with deadly weapon inflicting serious injury.

Authorities have said little about the case outside of the information included in arrest warrants, which allege that Craig beat a man and a woman, raped the woman and that Johnson watched as he did so. Durham County Assistant District Attorney Mark McCullough said earlier this week that charges stemmed from some sort of satanic ritual.

Attorney Bill Thomas said Palmer denies any association with satanic worship or any knowledge of a crime. He said the allegation against her is that Johnson or Craig asked her to take some items away from their house.

“The Durham Police Department has knowledge that my client was not present and did not have knowledge of crimes for which others have been arrested, and I hope the investigator will share this with the public,” Thomas said.

Court documents filed this week said the incidents occurred in December 2007 and in January and May. The warrants accuse Johnson of “instigating and encouraging” her husband as he handcuffed a man and forced him “into a dog cage, leaving him there for hours, terrorizing him.”

Other charges against Johnson stem from accusations made by a woman who listed the couple’s home as her address. The man listed in the warrants as having been caged also lived at the house.

Bond was being set for Palmer late Wednesday. The three were partners in a company called Indigo Dawn. Its Web site says the company offers services including “intuitive guidance, past-life regression, spirit guide communication and healing and cleansing.” 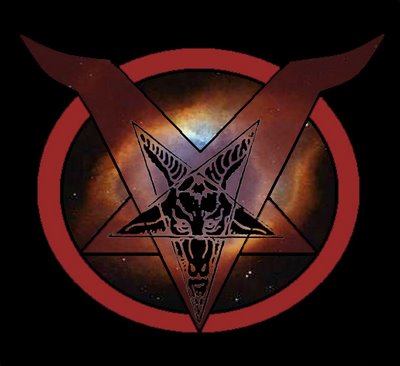 ST DAVID’S High School in Dalkeith was a place where most parents felt secure in the belief their children were being educated in a moral environment which protected them from some of the more disturbing aspects of youth culture.

But the trial of Luke Mitchell for the gruesome murder of Jodi Jones has rocked that assumption to its foundations.

The police investigation into the killing exposed a culture of drug taking, violence and Satanism among some pupils which raised dADVERTISEMENT

isturbing questions for the authorities that run the Roman Catholic secondary school – one of 59 such schools in Scotland.

Midlothian Council has refused to reveal what action, if any, was taken to tackle Mitchell’s behaviour, but senior school sources admit teachers were “not in control” of the teenager.

Now parents and politicians have demanded an investigation into why a pupil with a history of violence, drug dealing, underage sex and a fascination with Satan was allowed to continue his damaging behaviour seemingly unchecked.

Mitchell’s criminal activities and his attempts to corrupt other pupils with drugs and Satanism were no secret at St David’s. But at a time when the Scottish Executive’s policy was to avoid excluding troublesome pupils, he was allowed to remain at the school, mixing with other youngsters – one of whom would pay for her relationship with him with her life. …

From the Massachusetts General Laws:

Section 139G. Nothing in sections one hundred and thirty-nine C to one hundred and thirty-nine E, inclusive, shall prohibit, abridge, or in any way hinder the religious freedom of any person or group, and, in order to protect freedom of religion, ritual slaughter and the handling or other preparation of livestock for ritual slaughter shall be exempt from the provisions of said sections. In this section the term “ritual slaughter” means slaughter in accordance with the ritual requirements of the Jewish faith or any other religious faith that prescribes a method of slaughter whereby the animal suffers loss of consciousness by anemia of the brain caused by the simultaneous and instantaneous severance of the carotid arteries with a sharp instrument. … The MGLs give the green light for ritual slaughter, and the Supreme Court has upheld animal sacrifice …