As crowds gathered in Ho Chi Minh City on Thursday to mark the 40th anniversary of the end of the Vietnam War, Prime Minister Nguyen Tan Dung reminded the crowd of the role the United States had played in that war. "They committed countless barbarous crimes, caused immeasurable losses and pain to our people and country," Dung told the audience in an address.

Given that Vietnam and the United States now enjoy a relatively stable and friendly relationship, it may seem a provocative thing for the prime minister to say. But it's not hard to understand the reason for Dung's sentiment.

American estimates say that as many as 250,000 South Vietnamese soldiers died in the war, while 58,000 Americans were killed. In total, around 3 million North Vietnamese forces and civilians may have died, according to the government. There were acts of extreme cruelty committed by both sides, and American popular culture has established the war as a moral catastrophe.

Events like the My Lai massacre, in which U.S. Army soldiers killed 350 to 500 unarmed civilians in South Vietnam, helped swing the American public against the war at the time. In My Lai, villagers were killed en masse in retaliation for nearby booby traps and mines, and some were burned alive when their huts were set alight.

Yet, even with these acknowledgements, there's still a sense among some that the United States hasn't done enough to address the "countless barbarous crimes" Dung mentioned.

While 14 officers were charged by Army prosecutors in the aftermath of the My Lai massacre, only one man was convicted. Lt. William L. Calley Jr. was found guilty of killing 22 villagers, yet in the end served only three years under house arrest and four months in a military stockade after President Richard Nixon intervened. Academics such as Kendrick Oliver have argued that while My Lai caused horror, it mostly prompted outpourings of support for U.S. soldiers rather than for their victims.

And while My Lai is acknowledged, some say that the massacre was only notable because of its scale, and that smaller-scale killings of civilians by U.S. troops were alarmingly commonplace. In his book "Kill Anything That Moves," journalist Nick Turse argues that American authorities were aware of similar killings and often allowed them. 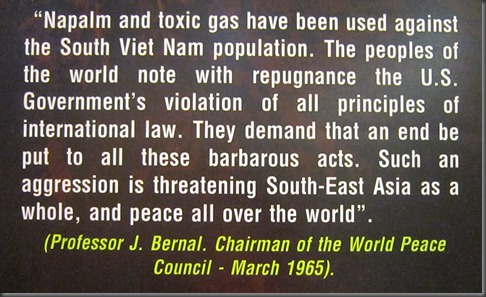 “The indiscriminate killing of South Vietnamese noncombatants — the endless slaughter that wiped out civilians day after day, month after month, year after year throughout the Vietnam War — was neither accidental nor unforeseeable," Turse wrote.

In Ho Chi Minh City, atrocities like these feature prominently in the War Remnants Museum, as do the other controversies such as the use of napalm or Agent Orange. These are the sort of "barbaric crimes" that Dung is alluding to. And, since many were not investigated nor punished, the Vietnamese prime minister's description of "countless" may be accurate.

Over the past week, the dark and disputed moments of the 20th century have been dragged up a few times: Turkey was infuriated by the global discussions of the mass killings of Armenians that began 100 years ago, while Japanese Prime Minister Shinzo Abe is facing more and more calls to clearly reiterate Japan's apology for wartime cruelty from over 70 years ago.

On the anniversary of the end of the Vietnam War, there's surprisingly little discussion of the painful history there, however. Four decades after the conflict, it may seem like there's simply too much to lose by bringing up a painful past: A 2014 poll by Pew Research found that 76 percent of Vietnamese had a favorable view of the United States, and 95 percent thought trade with other countries was good.

Adam Taylor writes about foreign affairs for The Washington Post. Originally from London, he studied at the University of Manchester and Columbia University.

The center-right corporate nonprofits study is credible enough to shut
down what’s left of democracy there? I don’t think so. Oh that’s right, Vietnam’s not a democracy. So the nonprofits will be allowed to run roughshod over what’s left
of Vietnam; anyone for a cheezberger?