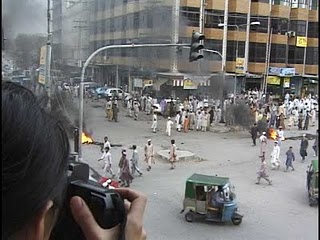 Clearly, Obama needs to announce a beer summit with the directors of Blackwater and have a roundtable heart-to-heart about why they feel compelled to murder masses of innocent people, pimp children for sex, and so on - all IN THE NAME OF THE USA. He should explain to the press that genocide is not a valid "conservative" principle. Then he should parade them off to one of the CIA's secret Hell holes for further questioning, and then we can all look forward, not backward, without a nagging conscience over the carnage left by this CIA death squad. - AC

Who put the "Xe" in Xenophobia?

By Nadeem Sarwar and Aqeel Yousafzai

PESHAWAR, Pakistan—Fear is spreading across University Town, an upmarket residential area in Pakistan's north-western city of Peshawar, due to the overt presence of the controversial US private security contractor Blackwater. Sporting the customary dark glasses and carrying assault rifles, the mercenaries zoom around the neighborhood in their black-colored armored Chevy Suburbans, and shout at motorists when occasionally stranded in a traffic jam.

The residents are mainly concerned about Blackwater's reputation as a ruthless, unbridled private army whose employees face multiple charges of murder, child prostitution and weapons smuggling in Iraq.

'Sometimes, these guys stand in the streets and behave rudely with the passers-by, sometimes they point guns at people without provocation' said Imtiaz Gul, an engineer, whose home is a few hundred meters from the US contractor's base on Chanar Road in University Town.

'Who rules our streets, the Pakistani government or the Americans? They have created a state within the state,' he added.

Repeated complaints to the authorities have been to no avail since, according to residents.

Founded in 1997 by Erik Prince, a former US Navy SEAL officer and a major contributor to Republican Party candidates, Blackwater has hired thousands of former military personnel from Western countries as well as other mercenaries from the Third World.

It emerged as the largest of the US Department of State's private security companies, winning multi-million-dollar contracts globally, but attracted a lot of media attention in September 2007 when its personnel killed 17 civilians in an unprovoked shooting while escorting a convoy of US State Department vehicles to a meeting in Baghdad.

The firm is now facing a civil lawsuit filed in the US state of Virginia by those who were injured and who lost family members in the massacre.

The company faces charges of human rights violations, child prostitution and possible supply of weapons to the Kurdistan Workers' Party, an Iraqi group designated by United Nations, European Union and NATO as a terrorist organization. It has been declared persona non grata in Iraq.

To conceal its bad reputation, the shadowy company renamed itself Xe Worldwide in February 2009 and Prince resigned as its chief executive officer the following month.

In Pakistan, the Interior Ministry asked the regional governments of all four provinces to keep an eye on the activities of Blackwater in early 2008, immediately after it was believed to have been hired by CAII, according to a media report.

Lou Fintor, a spokesman for the US embassy in Islamabad, said that Blackwater-Xe was not in any way associated with its missions in Pakistan. But the denial does not include the possibility that the security firm was working for a private US company.

Blackwater has recruited dozens of retired commandos from Pakistan's army and elite police force through its local sub-contractors, said an intelligence official who spoke on condition of anonymity.

Some Pakistani security officials suggested that besides providing security to the aid workers, Blackwater was carrying out covert operations.

Among these were buying the loyalties of influential tribal elders and tracking the money flowing to al-Qaeda and Taliban through the national and international banks, something which perhaps goes far beyond the mandate of a private security firm.

Taliban and al-Qaeda militants who use the tribal regions to attack civilian and government targets inside Pakistan and NATO-led international forces in Afghanistan are also watching Blackwater's moves.

On June 9, suicide bombers drove an explosive-laden vehicle into Peshawar's sole five-star hotel, the Pearl Continental, after shooting the security guards, and detonated it at the side of the building where some Blackwater guards were staying.

Sixteen people died including four of the security firm's personnel - two Westerners and the same number of locals. Four more guards were injured.

The dead bodies and injured were moved quietly. Neither the Pakistani government nor any foreign official admitted these deaths, apparently at the request of US officials.

'Absolutely no comments,' Qazi Jamil, the senior superintendent of police in Peshawar said abruptly when German Press Agency DPA asked him about the Blackwater deaths.

But a minister in the North-West Frontier Province government, who spoke on condition of anonymity, said he knew that some US private guards died but did not know how many and which firm they were from.

'The provincial government was not directly dealing with the issue. It's the federal intelligence agencies that handled it,' said the minister.

The possibility that Islamist militants might be plotting more attacks on the contractors is also a source of concern for many residents in University Town.

'In the first week of July we requested the interior minister in a letter that targets like Blackwater should be kept away from the residential areas,' said Ihsan Toro, a trader and member of council of citizens in University Town.

'Al-Qaeda and the Taliban must be after them,' added Toro.

This is a report by the German news agency DPA.