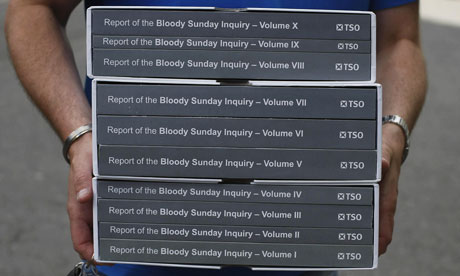 A copy of the Saville Inquiry report into Bloody Sunday. Photograph: Paul Faith/PA

Orders given by commanding officers

• The inquiry expressed surprise that Major General Robert Ford, then Commander of Land Forces in Northern Ireland, should have written in a 1972 memorandum (unrelated to the Derry march) that selected riot ringleaders should be shot after a warning was given. Although Ford decided that 1 Para should be deployed as an arrest force on 30 January 1972 in the event of rioting, Saville concluded "he neither knew nor had reason to know at any stage that his decision would or was likely to result in soldiers firing unjustifiably on that day".

• Lieutenant Colonel Derek Wilford did not comply with Brigadier MacLellan's order to tackle rioters by sending one group of troops into William Street "but not to conduct a running battle down Rossville Street". Instead, Wilford sent additional soldiers into Bogside. "The effect was that soldiers of Support Company did chase people down Rossville Street," said Saville. "Some of those people had been rioting but many were peaceful marchers. There was thus no separation between peaceful marchers and those who had been rioting and no means whereby soldiers could identify and arrest only the latter."

• Wilford either "deliberately disobeyed" MacLellan's order or "failed for no good reason to appreciate the clear limits on what he had been authorised to do". He also failed to inform MacLellan of what he had done. "Had he done so, MacLellan might well have called off the arrest operation altogether, on the grounds that this deployment would not have provided sufficient separation between rioters and civil rights marchers."

• Wilford did not pass on to Major Loden (the commander of Support Company) the brigadier's instructions not to chase people down Rossville Street, "nor did he impose any limits on how far the soldiers of Support Company should go".

Did those killed provoke the shooting by British soldiers?

• "None of the casualties shot by soldiers of Support Company was armed with a firearm or (with the probable exception of Gerald Donaghey) a bomb of any description. None was posing any threat of causing death or serious injury. In no case was any warning given before soldiers opened fire," the report said.

• The credibility of the accounts given by the soldiers was "materially undermined" because all soldiers bar one who were responsible for the casualties "insisted that they had shot at gunmen or bombers, which they had not". Saville said: "Many of these soldiers have knowingly put forward false accounts in order to seek to justify their firing".

Why did the soldiers open fire?

• The report concluded that officers reacted because of "the mistaken belief among them that republican paramilitaries were responding in force to their arrival in the Bogside", based on initial shots fired by one of their number, namely, Lieutenant N. "Our overall conclusion is that there was a serious and widespread loss of fire discipline among the soldiers of Support Company".

• Saville admonished Lieutenant N "not only for firing, but also for failing to realise the effect that his firing would be likely to have on the other soldiers who had come into the Bogside".

The role of the state

• Saville rejected the contention that the state had authorised the troops to use "unwarranted lethal force" or sanctioned them "with reckless disregard as to whether such force was used".

• It also rejected the idea that the government had more generally "tolerated, if not encouraged" the use of unjustified lethal force in Northern Ireland, thereby creating the conditions which led to the Bloody Sunday attacks.

What role did the IRA play?

• The report said that republican paramilitaries had been responsible for "some firing" but the scale had been exaggerated by British soldiers and "none of this firing provided any justification for the shooting of the civilian casualties".

• The report concluded that two Official IRA men had gone to a pre-arranged sniping position and shots had been fired by republican paramilitaries that were not merely in response to the British soldiers opening fire.

• Saville said Martin McGuiness, now the deputy first minister of Northern Ireland, "was probably armed with a Thompson sub-machine gun" but said that there was no evidence he fired the weapon and that this provided no justification for the soldiers opening fire.

• It also found evidence of people with nail and petrol bombs and at least one car used to hold weapons in Glenfada Park North. The inquiry said the Official IRA had tried to conceal the whole truth about its activities but that the Glenfada Park North area was clear of weapons when the soldiers arrived.