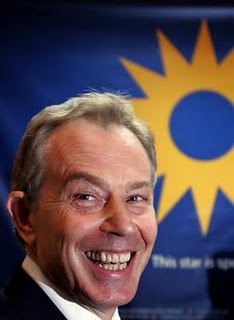 Tony Blair deliberately combined the threats from Saddam Hussein and al-Qaida following the 9/11 attacks, the official inquiry into the Iraq War was told today.

British Foreign Office officials have repeatedly told the inquiry, sitting in central London, that British intelligence had no evidence of any connection between the Iraqi regime and al-Qaida. But giving evidence on day three of the inquiry, the former British ambassador to Washington, Christopher Meyer, said Mr Blair had directly linked the two following a private meeting with President George Bush at his Texas ranch.

The next day the then Prime Minister had spoken publicly for first time about the case for “regime change” in Iraq. Meyer said it appeared that agreement on a new approach towards Iraq had been “signed in blood” between Mr Blair and Mr Bush. He also contrasted Mr Blair’s handling of the Iraq conflict unfavourably with the way that he believed Margaret Thatcher would have dealt with it if she had been prime minister.

Meyer said that initially, when the Bush administration came to power in January 2001, there had been little talk in Washington of regime change in Iraq, even though it had been official US policy dating back to 1998.

However, after the 9/11 attacks on the Twin Towers “everything changed”. By the time Mr Blair met Mr Bush seven months later, in April 2002, at the president’s ranch in Crawford, Meyer said there would have been no point in “banging on” about “regime change” only to say Britain would not support it.

He said that it was still unclear exactly what the two leaders discussed in private, but afterwards there was an apparent shift in the British position.

“I took no part in any of the discussions and there was a large chunk of that time when no adviser was there,” he said. “To this day I am not entirely clear what degree of convergence was, if you like, signed in blood at the Crawford ranch.”

The following day, however, Mr Blair made a speech in which he spoke publicly for the first time about regime change in Baghdad.

“What he was trying to do was to draw the lessons of 9/11 and apply them to the situation in Iraq which led – I think not inadvertently but deliberately - to a conflation of the threat posed by Osama bin Laden and Saddam Hussein,” he said. “When I heard that speech, I thought that this represents a tightening of the UK/US alliance and a degree of convergence on the danger Saddam Hussein presented.”

Meyer said Mr Blair had always been a “true believer about the wickedness of Saddam Hussein” having made a speech on the subject as far back as 1998.

However the British Foreign Office had ruled there was no legal basis for seeking to oust the Iraqi dictator and, prior to the Crawford meeting, Mr Blair had generally been “discreet” about his views.

Unlike the British, however, key US figures such as the influential deputy defence secretary Paul Wolfowitz were convinced there was a “strong connection” between Saddam and al-Qaida. Meyer said they had been “spooked” by the appearance in the US shortly after 9/11 of a number “anthrax-tainted” letters.

“The last person who had ever used anthrax was Saddam Hussein,” he said.

By this stage, Meyer said the British priority was to get the administration to agree to seek a new United Nations Security Council resolution to provide the basis for military action and overcome the objections of the Foreign Office lawyers.

However, he had a hard time persuading hardline “neo cons” like Mr Wolfowitz, who were “viscerally hostile” to the UN, that this was not a “limp-wristed, pitiful, European lack of will, pathetic type thing”.

“The way I put it was if we didn’t make a serious effort to go down the UN route, the first instance of regime change will take place in London,” he said.

Although they had won support of a new Security Council resolution in November 2002, the strategy was ultimately a failure because Hans Blix and the UN weapons inspectors had not been given enough time to complete their work.

Meyer said the “real problem” was that the US military was planning for an invasion in March 2003 which left the British and Americans “scrambling” to find proof that Saddam had banned weapons of mass destruction in time.

“It was impossible to see how Blix could bring the inspection process to a conclusion, for better or worse, by March,” he said. “Because you cannot synchronise the programmes, you had to short-circuit the process by finding the notorious ’smoking gun’.

“We have got to try to prove that he is guilty and we – the British and Americans – have never recovered from that because, of course, there was no smoking gun.”

Meyer suggested that if the weapons inspectors had been given more time, it was possible war could have been avoided.

“If we had planned for military action in the cool autumnal season of 2003 rather than the cool spring season of 2003, a lot of things might have been able to have been unwound,” he said. “The key problem was to let the military strategy wag the political and diplomatic strategy. It should have been the other way round.”