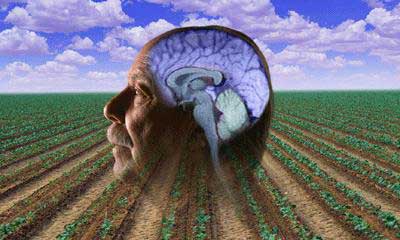 UCLA neurologists have discovered a link between the pesticide benomyl, a product whose toxicological effects still linger some 10 years after the chemical was banned, and Parkinson’ s disease.

The finding adds to the list of pesticides (paraquat, maneb and ziram) that have been tied to increases in Parkinson’s not only among farmworkers but in individuals who simply lived or worked near fields and likely inhaled drifting particles.

Researchers believe the association among benomyl and Parkinson’s disease is strong as the damaging series of events set in motion by benomyl may also occur in people with Parkinson’s disease who were never exposed to the pesticide, said Dr. Jeff Bronstein, senior author of the study and a professor of neurology at UCLA.

Benomyl exposure, they say, starts a cascade of cellular events that may lead to Parkinson’s. The pesticide prevents an enzyme called ALDH (aldehyde dehydrogenase) from keeping a lid on DOPAL, a toxin that naturally occurs in the brain.

The investigators believe their findings concerning benomyl may be generalized to all Parkinson’s patients.

Developing new drugs to protect ALDH activity, they say, may eventually help slow the progression of the disease, whether or not an individual has been exposed to pesticides.

The research is published in the current online edition of Proceedings of the National Academy of Sciences.

Parkinson’s disease is a debilitating neurodegenerative disorder that affects millions worldwide. Its symptoms increase with the progressive degeneration of neurons, primarily in a part of the mid-brain called the substantia nigra.

This area normally produces dopamine, a neurotransmitter that allows cells to communicate, and damage to the mid-brain has been linked to the disease.

Often, symptoms of Parkinson’s become apparent after more than half of these neurons, known as dopaminergic neurons, have already been lost.

While researchers have identified certain genetic variations that cause an inherited form of Parkinson’s, only a small fraction of the disease can be blamed on genes, said the study’s first author, Arthur G. Fitzmaurice, M.D.

“As a result, environmental factors almost certainly play an important role in this disorder,” Fitzmaurice said.

“Understanding the relevant mechanisms — particularly what causes the selective loss of dopaminergic neurons — may provide important clues to explain how the disease develops.”

Benomyl was widely used in the U.S. for three decades until toxicological evidence revealed it could potentially lead to liver tumors, brain malformations, reproductive effects and carcinogenesis. It was banned in 2001.

The researchers wanted to explore whether there was a relationship between benomyl and Parkinson’s, which would demonstrate the possibility of long-lasting toxicological effects from pesticide use, even a decade after chronic exposure.

“And epidemiologic studies have consistently shown the disease occurs at high rates among farmers and in rural populations. Our work reinforces the hypothesis that pesticides may be partially responsible, and the discovery of this new pathway may be a new avenue for developing therapeutic drugs.”