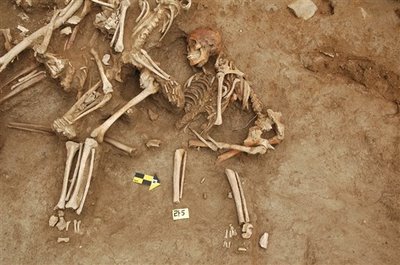 "... U.S. oversaw exterminations: Alan Winnington of the British Daily Worker in an article entitled 'U.S. Belsen in Korea' reported that 20 witnesses observed that truckloads of cops arrived on July 2 and immediately made people dig six pits of about 200 yards each. Executions went on for three days, by both machine gun and, when the bullets ran out, decapitation by sword ..."

As told by most history textbooks in the U.S., the Korean War started with a June 25, 1950, invasion from the communist north and the freedom-loving U.S. came to the aid of the besieged democratic Republic of Korea in the south. The reality was very different.

Not only did the RoK’s dictatorial, fascist-like regime of U.S. puppet Syngman Rhee make the first move, it had prepared for it for more than a year in advance. These preparations included using paramilitary fascist organizations and the regular army for cross-border raids on northern villages to test the defenses of the Democratic People’s Republic of Korea (DPRK).

Domestically, the preparation meant carrying out large-scale executions of suspected communists, leftists and anyone who opposed the neo-colonial rule of the U.S. in the south. The majority of these massacres took place throughout the summer of 1950, but thousands of civilians were executed by RoK military and police throughout the war.

The U.S. military—which had operational command of the RoK army—not only was aware of the massacres, but assisted and even directed many of the executions.

That these massacres had occurred was common knowledge among people both north and south. Due to the repressive anti-communist National Security Law, which threatened penalties of decades in prison, no one in the south dared to speak up until recently.

A half century of official silence finally began to end after the hard struggle of the pro-democracy movement in the 1980s created a political space. Even those who fled to the U.S. to escape the repression couldn’t speak up. They were dependent on established Korean-Americans for jobs, housing and loans, and these privileged elements often had ties to the right-wing Grand National Party or the Korean Central Intelligence Agency.

One voice through the decades spoke the truth to the world about the mass murders. The press in the DPRK constantly tried to bring these crimes to the attention of the world. Because Washington’s racist anti-DPRK propaganda was all-pervasive, the truth never gained any traction in the corporate mass media around the world.

Today in the RoK, a government-funded Truth and Reconciliation Commission headed by Ahn Byung-ook is investigating 1,200 incidents of mass executions in addition to 215 cases in which the U.S. military was directly involved in the executions. Of the more than 150 mass graves unearthed so far, the commission has the physical evidence, documentation and eyewitnesses to officially confirm two mass executions at Ulsan and Cheongwon.

The RoK government now acknowledges that its military, national police and fascist paramilitaries killed over 100,000 civilians at that time, when Korea’s population was 20 million. Kim Dong-choon of the TRC called these government estimates of the human cost of this bloody anti-communist paroxysm “very conservative.”

The numbers may be as high as 200,000 people, with some sources putting it as high as 300,000. These numbers do not even include the extra-judicial executions during the war of those RoK puppet troops deemed to be sympathetic to the liberation forces from the DPRK.

Rightist ideologues, both in Seoul and Washington, point to alleged massacres carried out by the Korean People’s Army, while denying that the actual proven murders perpetrated by the southern puppet forces even took place. In reality, according to a CIA study dated July 19, 1950, cited by Korea scholar Bruce Cumings, during the occupation of the south by the KPA “North Korean officials ran a tight ship but without a lot of bloodshed.”

In another CIA report from 1950, a “large percentage” of trade unionists and union leaders joined the KPA only 10 days into the war. DPRK President Kim Il Sung had given a radio address calling on people in the RoK to organize themselves. People’s Committees were formed and went about seizing Japanese and RoK government property as well as that of the rich.

KPA units in the south distributed rice to the people and emptied the jails of political prisoners, who then turned on the cops and the fascist youth groups. KPA troops, in alliance with the poor peasantry, carried out democratic land reform as they swept southwards. Even in the chaos of war, the KPA maintained its discipline. Cumings says that “captured North Korean documents continued to show that high-level officials warned against executing people.”

The same cannot be said of the RoK puppet forces. Before the war even began, the RoK government created the National Guidance League, a fascist-inspired “re-education” corps for people the Rhee dictatorship claimed were communists. By 1950, more than 300,000 people were forced to join the League.

Kim Dong-choon says the police or the military executed many of the League’s forced inductees. National Police under Korean Military Advisory Group supervision executed 7,000 people in Yangwol (near Taejon) from July 2-6, 1950.

Alan Winnington of the British Daily Worker in an article entitled “U.S. Belsen in Korea” reported that 20 witnesses observed that truckloads of cops arrived on July 2 and immediately made people dig six pits of about 200 yards each. Executions went on for three days, by both machinegun and, when the bullets ran out, decapitation by sword. According to eyewitnesses, U.S. officers oversaw everything while sitting in their Jeeps. The U.S. Embassy in London then had the chutzpah to call Winnington’s findings a “fabrication.”

The U.S. military, through its operational command over the RoK army, was involved at the highest level in the executions. New York Times correspondent Charles Grutzner talked about “the slaughter of hundreds of South Korean civilians, women as well as men, by some U.S. troops and police of the Republic.”

Keyes Beech, in a July 23, 1950, Newark Star-Ledger article wrote: “It is not the time to be a Korean, for the Yankees are shooting them all.”

Donald Nichols, a former Air Force intelligence officer, wrote in his 1981 memoir of witnessing an “unforgettable massacre” of “approximately 1,800” at Suwon during the war.

In addition, an investigation made by RoK lawmaker Park Chan-hyun in 1960 during the (relatively) democratic interlude of Chang Myon’s Second Republic revealed that an estimated 10,000 people were executed in Busan.

What these horrible, inhuman atrocities reveal is that the puppet RoK dictatorship knew its power rested upon a profoundly shaky foundation. As another quite frank CIA report cited by Cumings noted, the rightist RoK leadership “is provided by that numerically small class which virtually monopolizes the native wealth and education of the country.... Since this class could not have acquired and maintained its favored position under Japanese rule without a certain minimum of ‘collaboration,’ it has experienced difficulty in finding acceptable candidates for political office and has been forced to support imported expatriate politicians such as Rhee Syngman and Kim Koo. These, while they have no pro-Japanese taint, are essentially demagogues bent on autocratic rule.”

Rhee’s venal clique knew that his planned drive north depended upon drowning the patriotic and communist elements in the south in blood. Pockets of communist guerrillas who had fought the Japanese occupation were still active in the south as late as 1950.

According to KMAG commander Gen. W.L. Roberts, the RoK puppet army killed 6,000 communist guerrillas from November 1949 to March 1950. Of the attacks on northern border villages carried out by the army and the fascist Northwest Youth paramilitaries that took pace in 1949, Gen. Roberts said that “each was in our opinion brought on by the presence of a small South Korean salient north of the (38th) parallel.... The South Koreans wish to invade the North.”

Despite the staggering scale of the mass murders carried out by the Rhee puppet regime, patriotic feeling still ran so deep among the Korean people that even in the RoK National Assembly, 48 members declared their allegiance to the DPRK at the end of July 1950.

The issue of the mass execution of civilians still divides those who are subservient to U.S. neo-colonialism and those who want an independent Korea. Former RoK president Roh Moo-hyun apologized in an official capacity for the 870 confirmed murders at Ulsan, calling them “illegal acts.” In stark contrast, current president Lee Myung-bak, already deeply unpopular, has threatened to cut funding for the TRC.

Seven years ago, the U.S. government finally admitted part of its own guilt, that its soldiers had killed hundreds of innocent civilians in the South Korean township of Nogun-ri shortly after the start of the Korean War in 1950. President Bill Clinton himself expressed “deep regret” in a public statement on Jan. 11, 2001.