Three people who claim they were assaulted at a Donald Trump rally in Louisville, Kentucky, last month have filed a lawsuit against the Republican presidential candidate, saying he "incited a riot."

Molly Shah, Kashiya Nwanguma and Henry Brousseau filed the lawsuit on Thursday in Jefferson Circuit Court in Louisville, claiming that Trump's repeated calls of "get them out" at a rally at the Kentucky International Convention Center on March 1 was intended to direct his supporters to "use unwanted, harmful physical force to remove protesters, including the plaintiffs."

The lawsuit also names as defendants the Trump campaign and three individuals who the plaintiffs claim assaulted them at the rally.

The three plaintiffs, all Louisville residents, claim they suffered physical injuries, emotional distress and humiliation, and are seeking unspecified damages, according to the lawsuit.

"Peaceful protest is an American tradition, especially in the context of presidential politics," Dan Canon, the attorney for the plaintiffs, told Reuters in a Twitter message. "But what you see all over the country, time and time again, is violence employed against protesters at Trump campaign events. These plaintiffs are saying 'enough is enough,'"

The lawsuit said Trump stopped his 30-minute speech five times to point out protesters and, in most cases, told supporters to "get 'em out of here," according to the lawsuit.

A spokeswoman for Trump's campaign could not be reached for comment.

The lawsuit claims that Trump "incited a riot as defined under the Kentucky penal code." 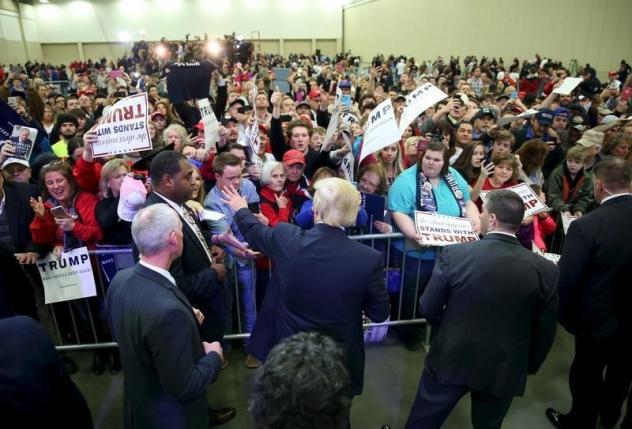 According to the lawsuit, at the rally, Heimbach, who was wearing a Traditionalist Worker Party T-shirt, attacked Shah and Nwanguma. A spokesman for the Traditional Worker Party could not be reached.

A website for the Traditionalist Worker Party describes it as a grassroots political organization that believes, among other things, that "European-American identity is under constant attack."

According to the lawsuit, Nwanguma was assaulted by numerous protesters at the rally, of whom Heimbach and Bamberger were the most aggressive. Video of Nwanguma, a 21-year-old college student, being repeatedly pushed at the convention went viral after the rally, the lawsuit said.