By now, of course, we know full well that the Holocaust is a bottomless pit. More than a half-century after the liberation of the last camp, new and wholly unsuspecting tales of both suffering and redemption continue to reach us. “The Fantastic Laboratory of Dr. Weigl: How Two Brave Scientists Battled Typhus and Sabotaged the Nazis” by Arthur Allen (Norton: $26.95, hardcover) is one such remarkable book.

At the heart of the saga is the humble but also much-hated insect known as Pediculus humanus humanus or, more colloquially, body lice, the transmitters of deadly typhus, a now-unfamiliar disease that was the source of dread over the centuries. Rudolf Weigl, the eccentric Polish scientist whose name appears in the book’s title, experimented with lice in order to come up with the world’s first effective vaccine against typhus — “a disease,” writes Allen, “that terrorized the world, inspired the creation of Zyklon B gas, and provided the pretext for the worst crimes in history.”

One of Weigl’s assistants was a young Jewish biologist named Ludwick Fleck, now best known as a philosopher of science. Fleck ended up in Buchenwald, where his scientific training prompted the Nazis to spare his life and exploit his knowledge in the camp laboratory, where typhus germs were cultivated and vaccines were developed under the direction of German doctors.

The bitter irony that suffuses “The Fantastic Laboratory of Dr. Weigl” is found in one of the commonplaces of Nazi propaganda. “Nazi ideology had identified typhus, which is spread by lice, as a disease characteristic of parasitic, subhuman Jews,” the author explains. “Learned German doctors convinced themselves that it was better to kill the Jews than to allow them to contaminate others.” Both Weigl and Fleck were doomed to play roles in what Allen calls “a theater of medicine gone wrong.” 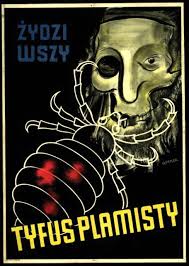 Much of the book is devoted to the long and dreadful history of typhus and the pioneering efforts to eradicate the disease.  Then, too, Allen conjures up life in the Polish city then called Lvov (which Allen spells “Lwow”), where “learned unemployables” resorted to spending long afternoons at cafes and coffee houses because it was the only available venue to “intellectual cross-fertilization.” Fleck availed himself of the cafe life after leaving Weigl’s lab until a favorable marriage at last enabled him to set up his own private laboratory.

Weigl, by contrast, enjoyed considerable success in scientific circles. “By the late 1920s, Weigl’s lab had become a mecca for serious typhus researchers,” Allen writes. “The endless supply of typhus germs he could offer visiting scientists was well worth the eight-hour train ride from Warsaw or the two-day trip from Vienna.” Later, he employed some 50 workers at the task of raising and processing lice by the millions in order to manufacture a typhus vaccine. The process, described in lurid but also lighthearted detail in the book, is the stuff of a horror flick.

The real horror begins in 1939, when Poland was conquered by Nazi Germany (and, from the east, the Soviet Union), and the likening of Jews to lice turned from a political metaphor into mass murder on an industrial scale. “Jews – Lice – Typhus” was the message on a German poster displayed in occupied Poland, which displayed the image of a louse and a bearded Jew. Both Weigl and Fleck, each in his own way, were recruited by the Nazis to address the authentic public health issue of typhus, but for Fleck, the venue was a concentration camp, where the metaphor took on life-or-death implications for the Germans, too.

“The Germans were indifferent to the suffering of the camp inmates, and encouraged death by overwork, beatings, torture, starvation, exposure, dehydration, diarrhea, and other diseases,” Allen writes. “But there was one illness that Nazis did not want inmates to contract, and that was typhus. They feared that typhus would infect SS men, or Germans outside the camps, and they feared the spread of lice.”

So the camp inmates encountered both literal delousing and, sometimes, the use of delousing as a method of crowd control: “Delousing was so routine in the Nazi realm, in fact, that at Auschwitz it could be used as a pretext to get Jews peacefully to remove their clothes and enter the gas chambers — which were equipped with fake shower heads.”

The ordeal of Weigl and Fleck is narrated with compassion and discernment by Allen, a journalist and historian whose previous work includes “Vaccine: The Controversial Story of Medicine’s Greatest Lifesaver.” Each man found ways to resist and subvert his Nazi masters, sometimes in astounding ways. The Weigl Institute, for example, became “a mysterious labyrinth of science and deception,” and protection from Nazi oppression was available to the lucky souls who were willing to strap cages full of hungry lice to their thighs: “Anyone who needed saving became a louse feeder,” reports one of Weigl’s assistants.

Fleck, for his part, was ultimately consigned to a particularly tragic circle of hell where typhus was studied within the confines of Buchenwald. Inmates accustomed to the starvation diet of camp rations were offered lavish meals without being told that the food was doused with typhoid cultures. Fleck himself contrived to perform experiments that were intentionally inconclusive out of fear that “if he ever finished the work … he’d be killed.” Daringly, Fleck and his comrades produced a total of 600 liters of useless vaccine that the Nazis intended to use to inoculate SS men and German soldiers while also producing six liters of effective vaccine to be used inside the camp itself — “a bold act of vaccine sabotage,” as Allen puts it.

At the end of Allen’s wholly surprising and affecting story, we are introduced to a man whose father always kept a small wooden louse cage as a keepsake of his work for Weigl. Only because he served as a louse feeder did he manage to survive the war. “I’m alive because of those lice,” the son says. Exactly here is the genius of Allen’s brilliant book — the moment when we realize how the humblest of creatures and the unlikeliest of human contrivances can change history.