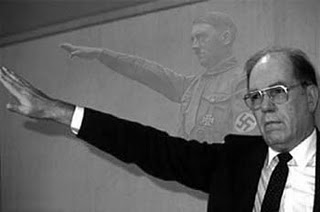 The LaRouche committee has staged dozens of protests nears Trader Joe's entrance and exit doors, of which there are usually only two, the grocer claims in Superior Count. It says LaRouche's members display pictures of Obama with a Hitler-style moustache and of Obama Photoshopped next to Hitler.

"At the Trader Joe's in Irvine, the LaRouche Activists wore swastikas, which brought some customers to tears," according to the complaint.

Tension between activists and customers nearly led to a fistfight outside one store, and in screaming matches have forced police to be called to remove the activists, driving customers away, the complaint states.

Trader Joe's says it has been bombarded with complaints from people saying they will not shop at the stores until the LaRouche people are gone.

However, a spokesman for the LaRouche PAC said, "It is a fairly significant First Amendment issue" that boils down to "what is a free-standing store under California Constitution?"

Trader Joe's has stores in free-standing buildings in Santa Barbara, Eagle Rock and Pasadena. The rest are in small neighborhood or community shopping centers.

Trader Joe's seeks damages for trespass, declaratory relief, and a restraining order and injunction. It is represented by Jennifer Laser with O'Melveny & Myers.