Body found may be Blake's

The LA Times reports that a body found near Sea Girt, NJ may be Jeremy Blake. The Asbury Park Press' Nick Clunn reports it too.

Jeremy Blake is from Washington, DC. He took his first art classes at the Corcoran. And the Corc has a major Blake exhibition scheduled for October. So: Why hasn't the Post said one word about his apparent suicide? 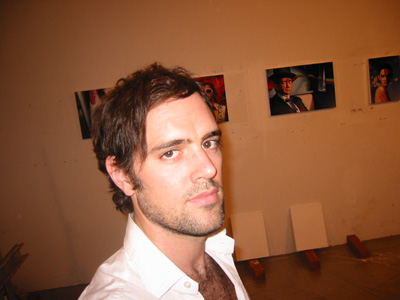 Expect this fall's Jeremy Blake show, Wild Choir: Cinematic Portraits of Jeremy Blake, to continue more or less as planned at Washington's Corcoran Gallery of Art. That's the word from the museum and from the show's curator, Jonathan Binstock (who recently left the Corc for Citi but who is moving forward with the show). This will be Binstock's second Blake show: He curated "Jeremy Blake: Digital Projections" at the Pennsylvania Academy of Fine Arts in 2000. Blake is missing off the coast of New York City.

The show is scheduled to open on Oct. 22. Blake was to have been an artist-in-residence at the Corcoran this fall. (The museum says that Blake, who grew up in Washington, took his first art classes at the Corcoran College of Art and Design.)

It is not clear how the show will differ from the original concept: The presentation of three of Blake's 'cinematic portraits' and many of his chromogenic prints. It is possible, even likely, that Blake did not complete one of the works scheduled for the show, a 'portrait' of Malcolm McLaren titled Glitterbest. (Two other 'portraits, Reading Ossie Clark, sequence at left, and Sodium Fox are complete.) People involved with the show stressed to me that it is too early to know what happens next in regards to their expected future communications with the Blake family and so on.

I'm told that Blake finished work on the show's catalogue several weeks ago. It includes a Q&A between Blake and Binstock, an essay by Glenn O'Brien, a poem by David Berman, and many images from Blake's Glitterbest project. The Corc's releases ends by saying: "Further details of this project are pending."
:::::::::::::::::::::::
from Saturday:

Theresa Duncan has committed suicide. Last we at newsgrist heard from her it was April... I'm late to the story, so I will be as thorough as possible; there are a handful of blog links below (updates to come); The NYTimes is the first major daily to break the story (today); she's been dead for ten days. She had a fascination for Jean Seberg, her tragic doppelganger (Seberg's is the B&W image above). In any case, Theresa was unique.

Artist Jeremy Blake is missing, according to New York City investigators, and he apparently drowned himself Tuesday night, said Lance Kinz, co-owner of the Manhattan art gallery that represents Blake. Police said a man "tentatively identified" as Blake was seen stripping to his shorts and disappearing into the surf at Rockaway Beach in Queens, N.Y., where no body had been found by Friday. Kinz said Blake's friends are convinced it was him because his wallet and clothes were found in the sand. Blake's apparent suicide comes a week after he found his longtime girlfriend, writer-filmmaker Theresa Duncan, dead on the bed in their Manhattan apartment, where she had left a suicide note.

Here's a characteristically dark, poetic quote from Theresa from a recent interview on LAist:

Q: If you were to make a perfume that embodied the essence of Los Angeles, what would it smell like?

A: My cologne is called Santa Ana after the powerful winds that bring desert heat and faraway smell into the city. It smells like: Celluloid and sand, coyote fur and car exhaust, contrail cloud and chlorine, bitter orange and stage blood and one bushel of ghostly, shivery night-blooming jasmine flowers like blown kisses from the phantoms of the ten thousand screen beauties who still haunt our hills every full moon because they think it's a stage light.

UPDATE 7/23/07: Some links to articles by Theresa, as well as to two animations she produced with Jeremy:

Theresa Duncan's blog: The Wit of the Staircase
The History of Glamour

Theresa Duncan's animated video ''The History of Glamour'' is a gentle, very funny pseudo-documentary of the fashion world that tells the story of Charlie Valentine, a girl from Antler, Ohio, who moves to New York City and becomes a supermodel and eventually a Madonna-like pop star. The film imagines a chic little society where Chanel No. 5 is served as a cocktail in restaurants with names like De Rigueur. One of the narrators (played by Mary Louise Wilson doing her best Diana Vreeland impersonation) is a fashion maven named Grace Greenberg who runs the definitive fashion rag Ooh La La Magazine.

Two Artists, One Suicide, the Other Missing
By RANDY KENNEDY
Published: July 21, 2007

In a case that is reverberating in the art world, the New York Police Department said yesterday that a video-game designer and budding filmmaker committed suicide last week and that her companion, a rising art star, has been missing since Tuesday.

The filmmaker, Theresa Duncan, 40, who has also drawn attention for her writings on cultural topics, committed suicide in their East Village apartment on July 10, the police said. Her companion, Jeremy Blake, 35, a well-regarded artist known for digital animation that blurs the line between abstract painting and film, has been missing since his clothes were found on a beach in the Rockaways on Tuesday evening, they added.

Found with the clothes was a note that made reference to Ms. Duncan, the police said.

Paul J. Browne, the chief spokesman for the police department, said that Mr. Blake was last seen taking off his clothes and then walking into the water at Beach 102nd Street on Tuesday. Police scuba teams have searched the waters off the beach since then, Mr. Browne added, but have not found a body.

Lance Kinz, a director of the Kinz, Tillou + Feigen gallery, which represented Mr. Blake, said that Mr. Blake and Ms. Duncan had been together for 12 years and were very close. The two collaborated, along with another artist, Karen Kilimnik, on “The History of Glamour,” a 1999 animated film that spoofed the fashion world. The short movie, which Ms. Duncan wrote and directed, was called “gentle” and “very funny” by Stephen Holden of The New York Times in 2001.

Mr. Kinz said that Mr. Blake told him he had discovered Ms. Duncan’s body after she committed suicide. He said he had spoken with Mr. Blake after her death and that, while devastated and grieving, “he seemed to be very much in control and to be coping with it.”

Mr. Blake, whose work has been shown at three Whitney biennials and at a solo exhibition at the San Francisco Museum of Modern Art in 2005, is scheduled to have an exhibition at the Corcoran Gallery of Art in Washington in late October, partly in collaboration with Malcolm McLaren, the musician and designer.

Mr. Kinz said it is unclear whether that show, or another coming up at his gallery, in Chelsea, would open. “There’s some hope that maybe that wasn’t Jeremy going into the water,” he said, “but it’s presumed that he’s gone.”
Ms. Duncan, who was raised in Detroit, became a prominent video-game designer in the late 1990s, making sophisticated story-based CD-ROM games for young girls — an underserved population in a business largely aimed at adolescent boys. She and Mr. Blake had moved to Los Angeles but recently returned to New York, Mr. Kinz said, where she was working on writing and movie projects.

She also maintained a blog called “The Wit of the Staircase,” where she wrote energetically and at length on topics ranging from books to politics to Kate Moss. Her last entry, dated July 10, the day she died, includes a blurry photograph of a woman putting on a mask and quotes the novelist Reynolds Price: “A need to tell and hear stories is essential to the species Homo sapiens — second in necessity apparently after nourishment and before love and shelter.”

Mr. Blake, whose work is in the permanent collection of the Museum of Modern Art and several other prominent institutions, began to make a name for himself in the late 1990s with dissolving photographic projections used to create the equivalent of geometric abstract paintings. He called his work “time-based painting.”

The 2005 exhibition in San Francisco was based around the San Jose mansion of Sarah Winchester, the widowed heiress to the Winchester rifle fortune, who built a mazelike house with 160 rooms to confuse or ward off the ghosts of shooting victims she believed would haunt her.

In addition to work for galleries, Mr. Blake also created sequences of abstract art for the 2002 movie “Punch-Drunk Love,” directed by Paul Thomas Anderson, who had seen Mr. Blake’s work in an earlier show in San Francisco while working on the film.