The CIA to Provide New Details into Hastings Death 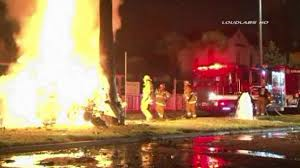 San Diego 6 continues to receive numerous inquiries regarding the status of its investigation into the death of National Security reporter Michael Hastings. Hastings died in a single car accident in Los Angeles on June 18, 2013. Videos of the crash scene depict several explosions that resulted in a huge fireball. The 911 call transcripts obtained by San Diego 6 also confirmed multiple explosions.

The Los Angeles Police Department determined early in the investigation process that no foul play was suspected in Hastings’ single car accident, yet nearly four months later the LAPD refuses to release its investigative report.

Documents and emails obtained by SD6 from LA Supervising Criminalist Dan Anderson, clearly states the LA coroner reported drugs and alcohol were NOT factors in the accident despite widespread news reports to the contrary.

In response to San Diego 6’s FOIAs, LAPD asserted a federal investigation may be pending as a reason for not releasing public information. However, the LA FBI office reported there was no investigation. Curiously a file on Hastings from the FBI obtained by Al Jazeera reveals the federal government considered Mr. Hastings’ work controversial enough to keep an active file but redacted much of the report.

A number of efforts to learn more details about the 2013 Mercedes has been met with roadblocks because LAPD Detective White has not closed the case. As a result the leased Mercedes is off limits and Mercedes spokespeople will not comment on the accident. This suggests LAPD still has possession of the car.

Currently, San Diego 6 is waiting for more FOIA information from the FBI, DHS, DOJ, and Dept of the Army.

This week the CIA responded to a written request by stating it will provide some information on Mr. Hastings, but declined to answer any questions regarding connections between Mr. Hastings, jailed journalist Barrett Brown or Reddit’s deceased founder, Aaron Schwarz.

Interestingly, the CIA asserted federal law, which prohibits it from spying on Americans as the reason for not responding to FOIAs on Brown and Schwarz, but failed to explain why it had a file on Hastings.

The LAPD also responded to a FOIA request as to whether the ATF+E (explosive) was called to investigate the Hastings accident scene by referring SD6 to ATF+E. Earlier ATF’s Chris Hoffman told San Diego 6 that he had no recollection of their dogs being sent to rule out foul play.