Terrorism in Bulverde – A True Story of Satellite Surveillance 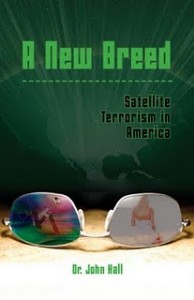 In what first starts like a bizarre cloak-and-dagger tale and turns into something from a sci-fi movie, ends up being the true story of terrorism endured on an epic scale by a Bulverde resident, his loved ones and friends.

Who is watching over us? A threat is stalking us and we don't even know it. After years of research and fighting for his life and of those he loved, Bulverde resident and new author Dr. John Hall brings this terrifying account of real life events to the masses in his first book, "A New Breed: Satellite Terrorism in America" which tells what happens when Big Brother goes too far.

The events Hall writes about didn't occur in some distant land or in a place like New York where criminal activity may be far greater, nor did the victims have knowledge of secret information or criminal activity that may have made them a risk. They are ordinary people... living in communities like Bulverde, Alamo Heights, San Antonio, and elsewhere that are experiencing a new form of stalking and surveillance... a new form of terrorism that is unseen. So what is the connection? Why would an average person be under surveillance? The answer to both questions may be: It is more random than you think and has to do with a vulnerability factor.

As a young adult in his hometown of San Antonio, Dr. Hall's life was not much different from many others attending college. "I made some close friends in college and partied when I could and worked when I should," says Hall. With his sights in the medical field, he earned his Bachelor of Science degree in Biology from University of Texas at San Antonio, with a minor in Philosophy and Theology. He graduated medical school at the University of North Texas Health Science Center in Fort Worth and completed his residency in Ohio, before returning to San Antonio in 1996 to start his medical practice. Currently Dr. Hall practices anesthesia and pain management in San Antonio.

It was during his college years in San Antonio and after he lost his girlfriend in a drunken automobile accident during Spring Break at the coast that he went to work part-time at an ambulatory surgical center as an anesthesia technician. It was here that he met one doctor in particular, out of the group of doctors that owned the center, who would play a sinister role in the unimaginable events which took place in the years that followed, and in part still continue today.

"A New Breed: Satellite Terrorism in America," is a chronicle of Hall's encounters as he tells the story of Mallory, his ex-finacee, who was an attractive young woman with a bright future. Upon beginning a new profession, Mallory begins experiencing unexplainable events, including mind control, surveillance, stalking and rape.

It was back in 1949 when the fictional novel, "Nineteen Eighty-Four" by George Orwell, became famous for its portrayal of pervasive government surveillance and control, and government's increasing encroachment on the rights of the individual, and the term "Big Brother" has since entered the popular vernacular.

Although Orwell's work was fictional, Dr. Hall's story and research shows these possibilities have become more fact than fiction.

Since that time, generations have seen tremendous advancement in medical science and technology. With the technological advances, American's concerns have grown as well, especially over loss of privacy rights, and continues to escalate due to the Patriot Act, and FBI or NSA phone taps.

We all know there are a multitude of satellites in space and most everyone has tapped into only a fraction of their capabilities in one way or another, whether it is by phone, internet service, or imagery and mapping like Google Maps and Google Earth. From these glimpses of satellite capability, it is accurate to say that most people imagine, and are somewhat fearful, that the government has more technology than we even know about.

When people think of stalking and surveillance, hidden cameras and microphones come to mind, and being followed or having someone sitting in a car outside your home...watching and listening. We've all seen it time and time again in television shows and movies. That's old technology, Hall says.

Now, imagine they no longer need a camera to watch you in your home, they can hear your phone calls, hear your very thoughts and control your moods and actions.

"Imagine no further, this technology does exist," says Hall. "It's called satellite surveillance; a weapon meant for government use."

Hall recalls the 1998 movie release of 'Enemy of the State' starring Will Smith. In the movie Smith's character is trying to evade rogue NSA Agents tracking his every move with satellite surveillance and HD cameras. While it may have seemed far-fetched at the time he says, the technology was already in existence then and is more advanced than sci-fi writers can even imagine.

What happened to Mallory? Hall believes satellite surveillance and tracking systems are a new way for criminals to take over our finances and our minds. He and others sacrificed themselves and their careers to bring her nightmare to an end.

"Criminals are accessing the government's most powerful surveillance tool to commit near perfect crimes," says Hall. It's classified technology that the government cannot admit exists, regardless of the lack of safeguards keeping the system from being hacked into, he writes in his book.

With his medical background and his technology research, he touches on the ways that both can and are being used in combination with regards to this new form of terrorism. "In the book I cover the basics of satellite imaging and weaponry and the effects it has had on it's innocent victims."

According to Freedom from Covert Harassment and Surveillance www.freedomfchs.com the CIA MKULTRA hearings held in the 70's revealed the existence of secret mind control experimentation programs being conducted by the government. Although the CIA officially abandoned these programs after the hearings, many are reporting a variety of effects and abuses consistent with the findings of the Church Committee investigation. Since that time and because of secrecy and lack of congressional oversight, the research and development of mind control and surveillance technology have advanced far beyond what most would imagine.