"Conservatives" have worked it all out - liberals are "Nazis." The left eschews homophobia, bashes Bush, opposes wars founded on false premises - Third Reich stuff. They are "Nazis." Freedom-loving "conservatives," on the other hand, are creatures of "principle," and endorse concentra ... ah, detention camps, mass starvation by embargo, torture, coerced confessions, the bombing of civilian targets, mass surveillance, secret trials, shrapnel mines, warfare as a means of personal enrichment, The "Bell Curve," genocide, "rendition" (disappearances), foreign intervention and coups, and other policies embraced by the Founding Fathers (beloved icons of Democracy/sinister, conspiratorial Freemasons) and Jesus. Commie-Nazi-humanist liberals just make no sense at all and must be taught the error of their ways ... - AC 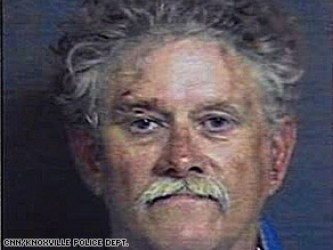 Police say a man opened fire at a Knoxville, Tenn., church yesterday because he couldn't find a job and "his stated hatred for the liberal movement."

"It appears he was acting alone," Chief Sterling Owen IV tells reporters. "In his written statement, he does not describe any affiliation with anybody and the sub search at his residence shows that it appears he was operating alone."

The chief say Adkisson fired three times with a 12-gauge shotgun. They recovered 76 shotgun shells at the Tennessee Valley Universalist Church. The gun was purchased last month at a pawn shop.

"I do not believe he expected to leave there alive," Owen says.

Owen says officers were at the church within minutes of receiving a call for assistance.

The FBI and ATF are assisting with the investigation.

Knoxville News Sentinel reports that the four-page letter that investigators recovered from Adkisson's truck "indicates he had been planning the shooting for about a week."

"It appears he did choose that church intentionally," Owen says.

An executive at a local commercial real estate firm is in intensive care after Sunday's shooting at the Tennessee Valley Unitarian Universalist Church.

Tammy Sommers is the office manager and chief operating officer at NAI Knoxville, a West Knoxville commercial real estate firm. According to Maribel Koella, a principal in the firm, Sommers is a member of the church and is a married mother of two boys, ages 3 and 5.

Koella said Sommers was an educator before joining NAI and said she is very involved in the church and in the Knoxville Chamber's initiative to improve local education.

KNOXVILLE, Tenn.: A slain Tennessee church member was remembered as a hero for shielding others from a gunman who opened fire during a children's performance Sunday.

Witnesses said Greg McKendry, 60, blocked others behind him at Tennessee Valley Unitarian Universalist Church from being hit by a shotgun blast.

McKendry "took the blast to protect the rest of us," church member Barbara Kemper told The Associated Press. ...

Victims and police were trying to find out why the gunman attacked the church known for its work promoting social issues like desegregation, women's and gay rights and civil liberties. ...

"It was hateful words. He was saying hateful things," she said, but refused to elaborate.

Police said the FBI was assisting in case the shooting turned out be a hate crime, but no motive was known. Police were taking statements from witnesses and collecting video cameras from church members who taped the performance. ...