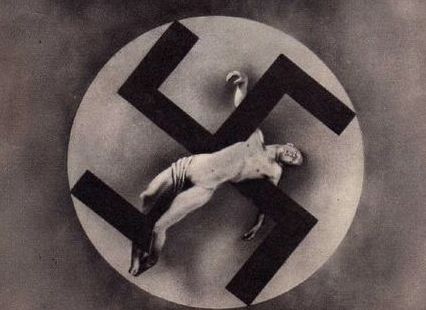 The warnings were posted prominently like mortuary billboards along Dead Man’s Curve. In the early 1920s, when Hitler and the NSDAP swaggered out of Munich’s beer-halls to propagate, socialist German newspapers took notice and denounced the future dictator. The most determined and sustained attacks appeared in the Munich Post in the early ‘20s, and for 12 years, as Ron Rosenbaum notes in Explaining Hitler, “produced some of the sharpest, most penetrating insights into his character, his mind and method, then or since.” Journalists at the Post were “the first to investigate him, the first to expose the seamy underside of his party, the murderous criminal behavior masked by its pretensions to being a political movement. They were the first to attempt to alert the world to the nature of the rough beast slouching towards Berlin.”

Hitler delivered his first speech at a small, public meeting on October 6, 1919. His party held its initial mass gathering four months later, and, at Hitler’s urging to employ “brute force” against the left-wing opposition, rapidly revealed themselves to be a party of murderous thugs.

The Munich Post issued its first editorial admonition against Hitler’s “mischief” in August, 1920. The “corrupt leader of the German fascists” was open to “bribery,” and had demonstrated his cowardice during WW I. As a political leader, he was only worthy of ridicule.

But the pages of German socialism’s leading house organ were soon filled with sober criticism of Hitler and the brutality of the NSDAP. In November, 1921, at the Munich Hofbrauhaus, Hitler confronted the opposition, a crowd that included members of Majority-Socialist Party, as the Social Democrats were then known. Objections to an attempt on the life of Erhard Auer, a journalist at the Post, incited a rumble. Socialists in attendance assaulted the Sturmabteilung (SA for short, anti-labor paramilitary “stormtroopers” underwritten by corporations to terrorize workers and farm laborers) contingent with their beer steins, but they were no match for the protean Nazi Party. In Mein Kampf, Hitler described the brawl as the SA’s “baptism of fire.”

Even Hitler’s hidden financing — a touchy subject that he consistently dodged — was an issue early on. In August 1921, the Post published a pamphlet entitled, “Adolf Hitler, Traitor,” raising questions about his financial underpinnings: “Just what does he do for a living?” Somehow, the struggling writer and artist from Bavaria could afford to drive expensive automobiles and smoke classy cigarettes.

Hitler repeatedly filed libel suits decided by Bavaria’s nationalistic, right-wing judges, and collected damages. But the Post didn’t back down — even after November 8, 1923, when the “schock troop” division of the SA splintered windows at the Post with their rifle butts, vandalized editorial offices and pressroom, assaulted anyone found on the premises and burned copies of the newspaper in the street while local police looked on.

The give-and-take between the Munich Post and Hitler continued, with a short intermission that began and ended with his imprisonment in 1927, until the ‘30s.

But the German polloi, increasingly aware of the newspaper’s warnings, failed to respond.

Sara Twogood of the Oral History Project at UCSB notes: “At its annual convention in 1931, the SPD decided to concentrate its attention on the Nazi party and its increasing popularity, for in its eyes, ‘Fascist participation in the government is a danger to be avoided at all costs.’” But Hitler’s slouching toward political power was only enhanced by popular support.

“The Post accordingly increased its coverage on Hitler and the Nazis. In the final two years of the Munich Post, from 1931-1933, very seldom was an issue published that did not contain numerous attacks and reports of Hitler’s party. These articles usually covered Nazi murders of political opponents, followed by coverage of the courtroom verdicts that allowed the murderers to get off free or charged with extreme lesser crimes instead.” The majority of Germans shrugged off these reports and swarmed headlong toward the Holocaust and total war.

On December 9, 1931, the Post revealed Hitler’s “secret plan for Germany.” Rosenbaum writes that the series “foretold with astonishing precision all the successive stages and persecutions the Nazi Party was to take against the Jews in the period between 1933 and 1939,” including “removal of the Jews from the courts, from the civil service, the professions; police surveillance and property; detention and expulsion of ‘unwanted’ Jews; Nuremberg-type laws against intermarriage and sexual and social intercourse,” and “a final solution … of the Jewish question.” Hitler’s secret plan “proposed to use the Jews in Germany for slave labor or for cultivation of the German swamps administered by a special SS division.”

The Post’s clashes with Hitler continued until March 9, 1933, when the newspaper was banned. Throughout Germany, socialist newspapers were shut down. Again, the SA ransacked the offices of the Post. Its journalists and editors were hauled off to concentration camps.

Rosenbaum: “They were the first to sense the dimensions of Hitler’s potential for evil — and to see the way the world ignored the desperate warnings in their work.” Hitler’s opposition “fought with their hearts and jeopardized their freedom and lives hoping the world would listen,” risked “imprisonment and death, trying unsuccessfully to warn the world,” but “even more disheartening is how successful Hitler was in erasing his first enemies, the Munich Post, from history and memory.”

The editors at the Post had an American ally in Edgar Mowrer, a foreign correspondent for the Chicago Daily News. Mowrer covered WW I battles in France and Belgium, and in 1915 was sent to Italy, where he met Benito Mussolini. In 1923, Mowrer was assigned to Berlin. He devoted the next ten years to documenting Nazi crimes and was awarded a Pulitzer in 1933.

“Despite pressure to soften his tine,” writes Allison Griner, a researcher at the Fellowships at Auschwitz for the Study of Professional Ethics, “Mowrer’s writing remained critical of political attitudes both within and towards Germany. Mowrer was one of the first American journalists to use the word ‘extermination’ and to warn about Nazi’s ‘barbarous campaign’ against the Jewish people. In 1933, his book Germany Puts the Clock Back was rushed to publication. In it, Mowrer documented the progression of Weimar Germany into the Nazi regime, foretelling some of Hitler’s bellicose plans.”

His warnings were frantic, but it wasn’t only readers of the Daily News who remained unmoved by German “atrocity stories.” Even many German Jews were unresponsive. Andrew Nagorski, author of Hitlerland, a book about American journalists in Nazi Germany, writes that Mowrer “kept advising Jews, ‘Get out of Germany!’ There’s a scene in the book where Mowrer is having lunch with group of Jewish bankers in Germany, and it becomes clear that each of them has given some money to [the] Nazi Party at the urging of non-Jewish industrialists. They were told it would be a way of protecting themselves a bit, and they believed it. Just like a lot of Americans, the German Jews thought, ‘This can’t really be happening.’”

“Why did so few heed the warnings of Hitler’s opponents?” asks Richard Weikart, a conservative professor of history at California State University, Stanislaus. With the exception of leftists and Jews, “most Germans ignored the warning signs. Their willingness to tolerate Hitler’s initial program of political oppression, because it was directed primarily against leftists, made them defenseless once the oppression widened to include Jews, Gypsies, the handicapped and even Christian clergy. … I wonder if we are often too quick to distance ourselves from Hitler, Stalin, and other ogres of their ilk, as though WE would never–even with unlimited power at our disposal–oppress or harm a fellow human being. Many “ordinary Germans” (and even many foreigners) assisted Hitler, after all, in carrying out his atrocities.”

It is hard to rule out the sympathy-for-the-devil theory when reading some of the international press reports from the period. London’s Observer, for instance, on March 20 1932 inferred that criticism of Hitler’s race hatred inflated the threat: “It must not be forgotten that the major part of the German Republican Press is in Jewish hands.”

Even foreign leaders remained willfully ignorant. Historian Steven Kreis at the Lectures on Twentieth Century Europe website goes so far as to find them complicit, de facto Nazi collaborators: “Although most western statesmen had sufficient warning that Hitler was a threat to a general European peace, they failed to rally their people and take a stand until it was too late. In this respect, you could argue that the responsibility for World War Two ought to remain on the shoulders of Britain, France and the United States.”

Compare and contrast the yawns that permitted Hitler to ascend to the highest political office in Germany, and the wholesale fear and loathing incited by the Red Scare of the 1950s. The former ignored actual evidence of the actual threat posed by fascism. The latter was mass paranoid hysteria, a political fantasy generated by an exaggerated threat. Americans, like the Germans, have been living with the stench of fascism since the early ‘20s, when Henry Ford and Irenee DuPont first kicked in to advance the Nazi cause. During the war, some 2,000 corporations in the US collaborated with the Nazis to enhance their bottom lines. And that may help to explain why America ignored the real threat and overreacted to the imagined one. Psychologically, we are conditioned by every intimation and nerve impulse of military-industrial culture to accept the actual fascist extreme, and fear a Red Dawn fantasy.

This may explain why many Americans were comfortable voting for Nixon, napalm and all, but felt uneasy with dove Eugene McCarthy.